ABC engages producers today. The big changes continue at the ABC. The rest of the TV industry will start finding out about them from late this afternoon when a series of industry figures and production companies will be briefed at ABC TV’s HQ in Ultimo in Sydney for a couple of hours from 4pm, followed by an informal meet and greet function from around 6pm. Featuring high on the agenda for discussion and elucidation will be the “three Cs”, which will be the new major drivers of the ABC’s desire for much of its content — certainly factual material. They are “conversation”, “contemporary” and “community”. (It sounds like they have been drawn up by a committee of people with experience in mission statements). The management of ABC TV, led by director Richard Finlayson, will start talking to some of Australia’s biggest TV production houses about these and other major change in approach to commissioning new programs or series.

Like the struggling commercial networks, The ABC wants more bang for its fewer bucks and is looking “big”. Just as Seven, Nine and Ten are now on the look out for big new formats from abroad and at home (such as The Block on Nine, My Kitchen Rules on Seven, and the fading MasterChef on Ten), the ABC wants something similar — but in the typical ABC fashion. What is being proposed is a major change of approach by the ABC and linked to the management’s desire for more control than before of production. This is all about ABC TV trying to do more with less. Funds are limited for new production; we are talking late 2014 into 2015 before this starts producing ideas and programs).

So think of a major anniversary (why, World War I started a century ago next year, and Gallipoli turns 100 in 1915), or a significant event (try a mysterious murder from our past, or how about recreating the siege at Glenrowan), the ABC wants that. But it will have to be contemporary (I guess Ned Kelly is out), it has to be “community” and it has to generate a conversation (the famed cliche of the Monday morning “coffee/water-cooler chat/BBQ” argument). Any axe murders, kidnappings or other atrocities? Nine has done over crime in the 1920s and ’30s. Put your pitch together now. — Glenn Dyer

In defence of Ja’mie, unpopular opinions. When ABC last week announced their television line-up for 2014 with Chris Lilley’s upcoming series Jonah, somebody I follow on Twitter posted: “Great. Another Chris Lilley show everyone can pretend to enjoy.” That’s funny. I didn’t realise I was just pretending to enjoy Ja’mie: Private School Girl. Obviously, because my opinion on the show doesn’t line up with that person’s opinion, or the majority of critical opinion, I must be in some self-deluded state where I’m desperate to hold onto a performer and a character who once gave us so much, but is now just a pale, yet hideously overplayed caricature.

Well, no. I’m not. I enjoyed Ja’mie: Private School Girl. I don’t think it’s absolutely genius, and it’s not Lilley’s best work, but it captures something about the pressures of high school and the evil that’s lurking in the ambitions underneath. It’s occasionally one-dimensional, and you probably have to be really into Lilley’s schtick and his subversive, no-holds-barred take on teenage girls, but it’s hilarious and has something to say. And I enjoyed it.

The majority of critics, particularly in the United States, fiercely disagree (a few have gone into bat for Lilley). The show has been labelled “sloppy, transphobic drag” by the AV Club. Even audience numbers fell by a third over the course of the six episodes, which would be of much bigger concern to the ABC. — Ben Neutze (read the full story at Daily Review)

Front page of the day. Tabloid editors collectively jumped for joy at news Miranda Kerr may be romancing James Packer. It’s rare to have a legitimate excuse to run a bikini model on the front page … 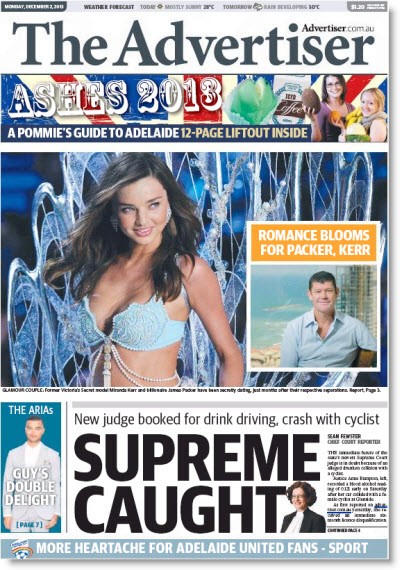 No one’s watching you, Big Brother. Maybe you should start paying attention?

I really enjoyed Ja’mie as well. I really think you need to see this in the company of teenagers. One of my kids went to a private school girl’s party that she said was straight out of the series, exactly the same. This is frightening but we need to know about it. Lilley has the courage to force us to look at the kids we are raising.

re Ja’mie: I have no doubt it accurately depicted the private school scene but the real laughs for me were in appearances by the South African father.