Journalists generally bitch about the winners of the annual Walkley Awards. But nobody could argue with Joanne McCarthy's golden night. Crikey partied with Australia's media in Brisbane. 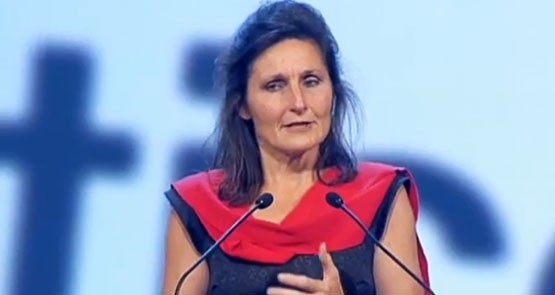 “Every Walkleys is long and boring,” remarked one jaded, boozed-up scribe as the early hours approached. “But something always saves them.”

In 2006 it was Glenn Milne’s attack on Crikey founder Stephen Mayne; last year it was ABC veteran Peter Cave using a lifetime achievement gong to bag the Walkleys judging process. This year, without a doubt, it was Gold Walkley winner Joanne McCarthy’s acceptance speech. In a room full of big names and even bigger egos, this down-to-earth regional reporter stole the show at Brisbane’s Royal International Convention Centre.

McCarthy explained she never wanted to be a journalist; her life goal was to be a librarian. It was only badgering from her boyfriend that led her to answer an ad for a cadetship at The Gosford Star. Now at The Newcastle Herald, the born-and-raised Catholic became the Church’s bete noire through years of tenacious reporting on child sex abuse. One of Julia Gillard’s last acts in office was writing to McCarthy to thank her for her reporting.

“For those who want to believe in God, she moves in mysterious ways,” McCarthy said.

While the Herald‘s Shine the Light campaign has been called crusading journalism, McCarthy said that imagery is wrong: “In crusades, you’re on a horse and your hair’s flying.” A better description, she said, is carving through a rock in the middle of a road — laborious, exhausting, fraught with danger.

Although McCarthy has won award after award this year, she says it was only this month, while listening to testimony at the royal commission, that the importance of the paper’s reporting sank in. “I feel good about the work that I do,” she realised. “I reckon every person in their lives should have that moment.”

McCarthy’s victory was a fitting end to a night that was dominated by Fairfax and by female reporters. Fairfax picked up 12 awards — read the full list of winners — ahead of the ABC on seven and News Corp Australia with five. News Corp editors — who were as scarce last night as pork belly rolls at a Bar Mitzvah — will no doubt see this as further evidence of egregious bias. Luckily, The Courier-Mail‘s Chris Dore was there to wave the flag; so was fact check fact-checker and Clive Palmer pursuer Hedley Thomas.

Crikey understands News’ pain: we didn’t pick up any gongs. But we did get to sit next to Labor frontbencher Anthony Albanese, who was in fine form. A throwaway question about Qantas sparked a lengthy, expletive-filled dissertation on aviation policy of which your humble correspondent, who may have downed a shiraz or two, understood precisely nothing. Albo’s take on the biggest change in politics between the 2010 and 2013 elections — the rise of the “selfie” — did stick in the mind though. Especially when he was spotted posing for a pic with best cartoonist winner Cathy Wilcox.

As for the gender divide: women took out 19 of the 34 awards, including the lifetime achievement award to Aunty icon Caroline Jones. Foreign Correspondent‘s Trevor Bormann took out two awards for his “Prisoner X” scoop, while Pamela Williams won book of the year for Killing Fairfax. The Age‘s Caroline Wilson won best commentary for her gutsy columns on the Essendon drugs scandal. International Consortium of Investigative Journalists boss Gerard Ryle, formerly of Fairfax, was recognised for journalistic leadership.

If the assembled hacks had one gripe it was that Channel Ten’s John Hill didn’t take home a trophy for his excruciating election campaign interview with Jaymes Diaz. He was beaten by Jenny Brockie for her Insight sit-down with Aboriginal youth and a Channel Seven scoop on a Defence Force sex ring.

The crowd, though, was relieved that host Emma Alberici didn’t “do a Franco”: the Lateline presenter was polished and droll with timely gags about table decorations supplied by ASIO — “feel free to take them home!” — and the ABC salary-gate saga.

The after party, hilariously, was held in a barn decorated with life-sized cow statues and a DJ spinning Dancing Queen. Fairfax and ABC types, far from Fitzroy and Surry Hills, looked as if they’d landed on Mars. Waiters served Dagwood Dogs and mini potato scallops; the Bundy and Coke flowed like Fairfax’s (former) rivers of gold. It could only have been more Queensland if three journos had been nabbed by the cops for having a durry together near the motorbike parking section.

As Come on Eileen blasted out of the speakers — and the dance floor stayers whooped, clapped and stomped — even the most banal cliches seemed to shimmer with meaning. Journalism was the winner on the night.

Lessons for the auto industry

Limited News shouldn’t be too disappointed – these are for “journalists” after all are – now they know how we feel, having to put up with their self-indulgent, amateurish advertorialism, selling Rupert’s political time-share from their “Conservative Protection Rackets R’ Us” catalogues?

Minor detail, but I’m not sure in what universe Caroline Wilson’s coverage of the Essendon saga could possibly be described as ‘gutsy’. She was being hand-fed leaks from highly-placed people inside the investigation, and faithfully repeated what exactly her sources wanted her to say without having the integrity to do any sort of analysis of her sources’ agendas. And her ‘gutsy’ stand was 100% in keeping with what the AFL, the government at the time, and the staff/supporters of every non-Essendon AFL club wanted to hear.

Hardly a brave solo crusade for justice. It takes very little guts to be the lead greyhound chasing a rabbit.

I have to admit, by the time they finally got around to presenting the big one, I was more than a little cheesed off with the “delayed broadcast” of a “live event”.
(These days, Twitter waits for no one.)
But Joanne McCarthy’s speech was such a gem, I cheered, raised a glass of wine and even blinked back a tear or two.
What a champ and what a speech. Kudos!

Alberici was an excellent host. McCarthy was a fine choice for the Gold Walkley.

McCarthy for Australian of the Year 2014.