The shake-out at La Trobe colleges. Last week Victorian university La Trobe announced a merger of its faculties into two colleges: Life, Society and Culture, and Science, Health and Engineering. It’s the subject of much water cooler chat on campus, writes one insider:

“Schools and departments are now in a process of existential reflection figuring out where best they fit. The purpose isn’t clear, but it clears space for another round of redundancies at high academic level and the making of a few kings or queens as they head up the new colleges. No news of this on their flash new website, though.”

A right royal stoush, then. Who’ll come out on top? Drop us a line if you know more …

Still getting Fresh at UQ. Meanwhile, remember the saga over student elections at the University of Queensland? Well, the losing Liberals — Fresh — are going out with a bang. One campus political operative reports:

“Handover is on December 15, but over the last few weeks they’ve attempted to have an administrative committee meeting (a board that is supposed to oversee day-to-day affairs of union management, but has developed into a way to avoid scrutiny through union council) and a union council meeting — both of which failed to get quorum — to pass a massive package of capital expenditure, involuntary redundancies of senior staff and the creation of new positions. All without providing any more information than that on what they’re trying to ram through.

“Seeing as both of those failed, they have decided it is an emergency decision — the flying minute was on the union noticeboard hidden behind things from 2011. The executive is made up of the president, secretary, treasurer and vice-presidents, including VP Elliott Johnston — the winning University Senate candidate … 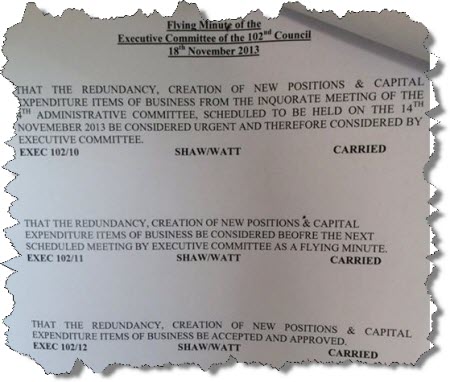 “Essentially, a clique of people who have just been voted out have radically altered the union’s organisational and financial position, and committed to spending millions of dollars in renovations just to spite the people who beat them in an election. Members of union staff who’ve been there for more than a decade have told me that they have never seen an exec so out of control — and they believe Fresh are trying to make redundant large numbers of staff so the union can’t operate well.”

WEA willy winkies, what’s up? Workers’ Educational Association of South Australia (that’s “WEA” to locals) is a large community-based adult learning organisation. And there’s something going down at management level. We’re looking into some serious claims, but you can always help us out — drop us a line or use the always-anonymous online form on the website.

ADF abuse: not over yet. The head of the Defence Abuse Response Taskforce, Len Roberts-Smith QC, wrote an update on the inquiry into Defence Force abuse for The Age on Wednesday. It didn’t go down well with victims. The chairman of the taskforce opined:

We’ve been told victims are angry by the “self-serving” nature of the piece and wanted a right of reply. Nothing so far.