RIP Brian, a dog who spoke for an America long gone

Brian the dog was far more than a dog on a cartoon sitcom. He was the voice of a pre-fall America, a bit Lost Generation, in pursuit of the authentic. He will be missed. 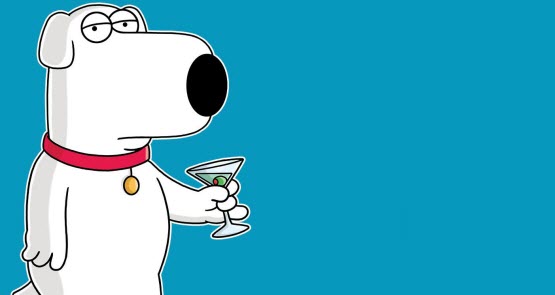 Several days after the outrage, more than a million people in the United States have stirred themselves to protest. Protest at a senseless killing, but at something more than that — at an attack on their way of life, on the things they hold most dear. Who says that people have become a bunch of apathetic couch potatoes, devoid of any connection to the real world when so many can stir themselves to rail against … the killing off of Brian the dog on Family Guy?

Yes, Brian, the deadpan, hard-drinking pet of the Griffin family of Quahog, Rhode Island (a quahog is a species of clam and US student slang for … well you’ve seen the show, you work it out), has been killed off in the latest US-run episode of the show, hit by a car, farewelling the family with an emotional “you’ve given me a wonderful life — I love you all”. In the same episode he’s replaced by a new dog, Vinny, voiced by Sopranos actor Tony Sirico, and by episode’s end, Vinny has all but replaced Brian in the Griffin family’s hearts.

The death has shocked dedicated viewers of the show — so much so that a change.org petition launched to demand his safe return to the series now has more than 100,000 signatures. That the whole incident may be one of Family Guy creator Seth MacFarlane’s cuter stunts is suggested by the fact that episode titles featuring Brian have already been registered for copyright in the US. On the other hand, with the show in syndication (i.e. sold as a multi-series bloc to hundreds of networks around the world) MacFarlane is now a gazillionaire, and he can do what he likes. Perhaps he simply got bored — having done everything within Family Guy itself to stimulate the adrenalin, perhaps he needed to create a furore outside of it.

This is, after all, a show that features a family dog who lusts after Lois Griffin, the wife and mother of the house — who asked Brian to examine her breasts for lumps (“ah, Lois, anytime you need uh, any examination of your uh, genital areas …”), a baby who simultaneously knows nothing about sex, is breastfed, and appears to be both homosexual and a tad predatory, and Peter Griffin, husband and father, who helped put-upon daughter Meg get through a rough patch by having an incestuous relationship with her, while in disguise.

But through all the dysfunctionality of the Griffin family and the world they live in, the one steady hand at the wheel, the one reality-oriented adult in the group, has been the family dog. Brian is not merely the only character we recognise as someone we could communicate with, he’s the only one who’s connected to a world outside the bubble of American surplus culture, the spiritual situation it arrived at from 30 years with the corn starch tap turned on, its incessant diet of 24-hour entertainment, consumer-led economics, failing education systems, and its contradictory fusion of prissy and self-satisfied puritanism, with a heroic refusal of appetite control, an ocean of porn lapping at the stones of a thousand megachurches.

“… he’s the only one who’s connected to a world outside the bubble of American surplus culture.”

That’s the world the Griffin family operate in, and their moral and existential chaos, their lack of self-governance, and their inability to stand outside it and see how chaotic it’s all become gives it a function as America’s cultural outpipe, its backwash filter. Were they to do this stuff with live actors, someone would be arrested; in animation, it remains in a suspended state, a satire of the culture that no one can pin anything on, because it’s a ‘toon. The sitcom form it parodies (as, in a different way, does Arrested Development) is a major part of that cultural shaping. Sitcom is the opposite of tragedy; if Chuck Lorre made Oedipus, the marriage would survive because Jocasta’s cooking was, after all, just like Mom’s (“But …” “I know, I know, shhh shhhh …”, roll end credits).

Sitcoms assume stable, ego-focused, small group worlds, whether those of families or friends, in which — thought the situation may change over many episodes — the status quo is always returned to zero. Nothing ruptures, nothing is irrecoverable, life has no arrow, no entropy. Initially sitcoms mirrored a more stable society (and also ideologically positioned its alternatives as illegitimate); Lucille Ball’s chaos was a feminine protest at the post-war marriage/family settlement, which never questioned the structure it imposed. Even something as cutting-edge as The Simpsons limited its satire to the content of American culture.

Family Guy goes beyond that. It’s a s-Id-com, the story breaking up frequently to follow a lame joke, test the audience’s patience, or play an entire song by the venerable country singer Conway Twitty. The idea of the Griffins as a family is ruptured from the start, with the parents and children taking interchangeable roles, the wise elder being a pre-weaned baby with a Noel Coward-esque drawl, and the only guy you would trust in a real situation being the family dog. The family guy is Brian, not Peter. The only rational characters in the show are those who should be outside language — a suggestion that America has become so saturated in cultural transfat that the mere entry into language deprives you of an outside perspective.

Nor is it coincidental that Brian’s obsessions are those of the culture before it fell into the fryer. With his half-written novel, his pursuit of skanky women and his suicide revolver in a bank vault where he can get it if he needs it, he’s a little bit Lost Generation, a little bit beatnik, but always in pursuit of the authentic, unmediated and visceral existence — a category that the family whose pet he is can’t even recognise. You could kill off anyone else in that show — apart from Stewie — and there’d be no waves, since they’re all expressions of the manufactured American collective unconscious. The death of Brian feels like real loss, and that’s unquestionably why they did it. That it attracts a mass movement far in excess of campaigns for the minimum wage, against the Keystone pipeline, or for Obamacare, is clearly part of the satire. All good fun unless MacFarlane gets to present the Oscars again.

RIP Brian 2002-2013, taken, well, months before his time. Coming up, American Dad, a Badiouian account. This will be on the exam. Protractors may be used.

here, here
RIP Brian, your wit and martini’s will be missed

can someone remind what the “real world” is? apparently myself and this computer exist in a type of reality but at the same time our proximity and interaction makes in unreal?

Interesting article Guy, thanks. As a Family Guy fan I will miss Brian too. As you say he was killed off, no doubt, to shake things up and get a reaction. And that has worked. The worry is that without Brian’s Yin to Peter’s Yang, his self-indulgent (yet usually correct :)) tirades about modern American culture and his hard-drinking, pot-smoking spontaneity, the show will suffer and the family will fall into directionless self-parody.
I don’t know the new dog, but it will take some great character development and writing for him to live up to Brian’s legacy. It’s a risky decision but good luck to them.