The curious case of the dead penguin. A concerned Crikey reader reported that a dead Fairy Penguin was found on the side of the road in the Melbourne suburb of Carlton. That’s not the kind of thing to go with your piccolo latte, is it. News of an “over-excited” tiger at Queensland’s Australia Zoo prompted us to contact the Melbourne Zoo to see if the penguin had also gone rogue. A spokesperson said this:

“We currently have 17 adults and 5 chicks at the Zoo, and all are present and accounted for, as per the count yesterday. Penguins are fantastic swimmers and divers, and they waddle along pretty effectively on land, but they don’t fly at all.”

This is not the first penguin incident. In 2010, a “gang of pranksters” stole a 10-year old female penguin named Kelli from the Dublin Zoo; she was traumatised by the incident.  Last year, two Welsh tourists stole a penguin named Dirk from Queensland’s Sea World after a drunken night out and were fined $1000 each for their troubles.

Another Crikey source reported that dogs in Melbourne often retrieve dead penguins from the beaches surrounding the city. Is this correct — and the Baha Men would like to know who let the dogs out? If you have information on the dead penguin, let us know.

Ghost writer. Education Minister Chris Pyne is facing an uphill battle to sell his dumping of the Gonski reforms. Perhaps it’s time to for Carolyn Pyne, a mother of four and student at Adelaide University — who bears a striking similarity to Christopher’s wife — to rejoin the national debate?

In May Carolyn published a piece for the website Open Forum asking why advocates of education reform claim that the socio-economic status (SES) model for school-funding — a Coalition fave — is broken.

The piece was also filed on “Carolyn Pyne’s blog”. Mrs Pyne is no stranger to taking up the pen in support of her husband. In 2007, she wrote to women in the Sturt electorate urging them to re-elect her beau. So is it time for Mrs Pyne to fire up again? We’re not suggesting there’s anything wrong in her expressing an opinion — plenty of pollies have partners who are lobbyists, run campaigns or write op eds. And no, they don’t always agree with their MP wives and husbands. Perhaps we’ll give you a few more examples tomorrow … 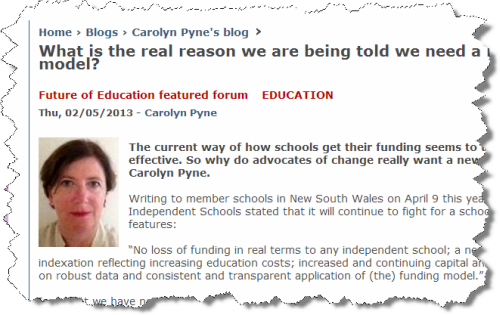 An age-old question. Crikey has been writing plenty on older people recently — do they have it too good? This prompted a Crikey tipster to make this claim of Age Discrimination Commissioner Susan Ryan: “none of her staff are older than 40 and most are younger than 30 years old. You would think the commissioner might practice what she preaches?”

We checked it out. Ryan herself  is 71. A spokesman from the Commission said Ryan’s two senior policy advisors and the media advisor are “over 40”; on pressing, he revealed all had been born in the 1960s, making them 50+. Ryan also has an EA in her early 20s and a junior policy adviser who will soon turn 30. So frankly, our tipster is wrong — that sounds like a pretty age-diverse office to us.

Australia’s worst jobs. We’ve been intrigued by your emails detailing your worst jobs. Here’s some additions:

“In my youth I cleaned up after 150 cows in a walk-through dairy. That was easy. The nastiest job was hauling the putrefied afterbirth out of a cow: Hold breath, wind afterbirth on stick. Pull. Take quick breath. Repeat. Awful! Closely followed by using a truck or tractor to haul a dead calf out of a nearly dead cow. Strange as it may seem, you never see that on Dr Harry or Bondi Vet.”

“My friend was working as a telemarketer, trying to get donations for a charity. His job was to ring people who had donated before. First day on the job, one of the first phone calls of the morning, he asked for the woman who had previously donated. Her husband said ‘she died’. My friend looked on his computer screen and there was a button for ‘deceased’ so he pushed it, and it said ‘ascertain cause of death’. My friend said he was very sorry to hear that to the grieving husband, hung up the phone and walked out of the office, never to return.”

“My husband dug for worms (the kind used as fish bait)  in mud at low tide on a river just north of Brisbane.  These worms were worth more entire (as in not cut in half), because they lived longer, oddly enough.  Can’t remember each worm’s worth, but needless to say it wasn’t much.  That was truly a crap job.”

Can you top those? Send in your worst job.

The youth of a deputy. We love running pics of pollies in younger years. Here’s the Deputy Premier of Queensland Jeff Seeney looking cheery at Moonford State School in 1964, roughly 500 km north-west of Brisbane. That’s him in the back row with fair hair, standing on the right shoulder of the middle man. “Moonford was a village with a handful of houses, a telephone exchange, a community hall and the school,” recalls our tipster. “In those days the Seeneys were a dynasty in the community.” 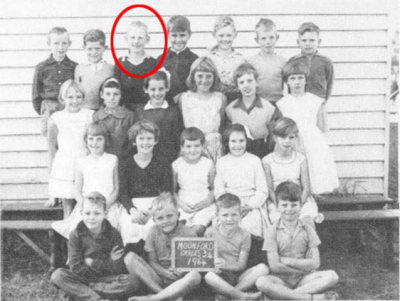 >putrefied afterbirth out of a cow

I like to think I am a multitasker, but there is no way I can both eat my lunch and read stuff like that at the same time.

Drop Bears collect beach-washed Fairy Penguins and relocate them where they will do most good for the social fabric.

At least get that right!

If Ms Pyne does not realise that the SES model is inequitable and “broken” then it casts into doubt her credentials.

The only supporters of this model would be those with a doctrinaire view of education rather than an approach based on reason. I suspect that Ms Pyne is probably also an ardent catholic