Tigers don’t change their stripes, even behind bars

PETA special projects co-ordinator Des Bellamy says that the blame for captive animal attacks lies squarely with those who cage them. 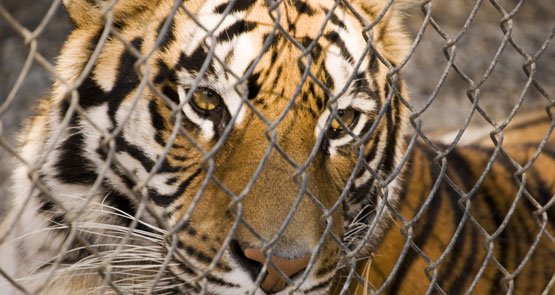 When a tiger mauled a handler at Australia Zoo this week, people were surprised and outraged. But tigers are apex predators and have few natural enemies, other than man — or woman. The Australia Zoo attack was just the latest in a long list of such incidents around the world — why are we so surprised when captive creatures act like, well, wild animals?

Keeping tigers in zoo cages gives people the warped idea that these animals are little more than cuddly kitties. But captivity does not extinguish all the genetic drives that tigers are meant to follow. Attacks by captive big cats on people — which occur with staggering regularity — illustrate the profound level of stress, anxiety and agitation these animals experience every day of their lives. Zoos cannot tame tigers, and captivity is a living hell for them. In captivity, they cannot engage in any of the activities that give their lives meaning. Is it any wonder that tigers seize opportunities to make their frustration and rage known?

No animal can thrive in such an artificial and stressful environment. The movie Blackfish tells the story of Tilikum, an orca torn from his family in the wild and imprisoned in a concrete bathtub at SeaWorld, where he made headlines after killing a trainer in 2010, after 30 years of captivity. The cynicism that condemns such magnificent animals to a life of misery is only matched by the greed evident in ordering employees to “perform” with clearly dangerous predators.

Perhaps Hugh Lofting, author of the iconic The Voyages of Doctor Dolittle, said it best: “If I had my way … there wouldn’t be a single lion or tiger in captivity anywhere in the world. They never take to it. They’re never happy. They never settle down. They are always thinking of the big countries they have left behind … what are they given … a bare cage with iron bars; an ugly piece of dead meat thrust to them once a day, and a crowd of fools to come and stare at them with open mouths!”

Tigers are in trouble in the wild, but why would anyone take their plight seriously when they see them performing in silly shows, posing for photos and jammed into zoo cages? These displays give the public the idea — overtly or not — that tigers are doing just fine. Unless habitat protection is taken seriously, coupled with aggressive action to stop poaching and canned hunting, all the zoos in the world won’t save this species.

Big cats living their lives on the African plains also need protection. “Trophy” (oh, what a ghastly term) killer Melissa Bachman gleefully posed with a menagerie of her victims recently, including a gorgeous adult male lion. Her ear-to-ear smile incited rage around the world from people who cannot comprehend how anyone could feel joy, much less pride, from deliberately snuffing out a life. But that’s little consolation to the dead lion and other animals living in constant danger of being blasted to bits with scopes, infrared sights and high-calibre weaponry.

Why can’t we just leave animals alone? Well into the 21st century, when presumably we’ve learned something about being civilised, why do we think we have the right to force animals to live behind bars for our fleeting diversion? What arrogance allows us to believe that we can go into their homes, stalk and kill them, and then brag about it by posing next to their lifeless bodies? Humans don’t own the planet, but we certainly act like we do.

More and more people have come to recognize that today’s zoos are little different from the days when circuses caged albino and hunchback human beings alongside pumas and primates for the public’s amusement. Both should be equally unthinkable today.

Can I be photographed with my ideal trophy kill – Michelle?

DES BELLAMY: Your article tends to beg the question if open range zoos have any place in the twenty-first century at all? Or is the world of Zoos-the ones dedicated to breeding-just so much decoration for the human eye and no benefit at all for the animals?

By your own admission the world of big game hunters-as personified by the retro Hemingesque figure of the odious Melissa Bachman still exists. Add to that the slaughter of wild elephants, for their ivory and rhinoceros for the supposed virility of elderly Chinese-hey old men, haven’t you heard of Viagra? I’ve even heard that it’s possible to hunt wild animals via the Internet.

Meanwhile how are you going to protect wild animals when the governments of various countries allow this sort of butchery?

Thus do we arrive at the only choice open to us. Do we turn a blind eye to butchery, and/or do we allow/encourage open range zoos, or the older type of smaller zoo to exist?

There is nothing we can do to stop man’s race to oblivion by monumental over-breeding and governments see no benefit it allowing animals more space to live in.

Instead of rushing into print telling the readers what a bunch of bästards we are, put forth some sound arguments to rectify the situation.

Excellent points and sentiments in this piece.

When a man behaves violently or without conscience we describe him as “an animal.” Inexplicably, we then forget that wild animals are dangerous and do not live by our behavioural rules even when ‘tamed’.

Owners of domestic cats accept they’ll occasionally receive a sharp nip or a random swipe from Fluffy. Why do we expect big cats to be any different…

All very, very emotive stuff, but about what you would expect from a PETA spokesperson.

For every zoo that forces animals like tigers into small cages (the Surabaya Zoo being a particularly notorious example)there are zoo’s around the world underaking critical work to ensure the long term survival of species currently under threat.

This ranges from the so-called ‘big five’ animals (lion, tiger, elephant, rhino and giraffe) through to local examples such as the cancer-ravaged Tasmanian Devil population.

Yes it would be lovely to hope that all animals would flourish in the wild, but that’s not the world we live in, zoo’s and other conservation programs work in the real world, a place that unfortunately PETA doesn’t.

The situation in the US is far worse. Thousands of tigers, lions and other big cats kept as pets there. Usually in terrible conditions. Big Cat Rescue does what their name suggests, they’re a sanctuary for abused or aged big cats.

They make a big point of not breeding their cats, and lobby for the banning of them as pets. Their site has a big section describing why big cats make bad pets.

They also have a great YouTube channel. The cats they look after are the happiest I’ve ever seen in captivity. The stories on there about rescuing cats are heartbreaking.

Another fact about big cats they emphasize – no matter how long they’ve been in captivity, they are still wild animals, and will attack suddenly and for no reason. I tiger will kill it’s own mother if she strays into it’s territory.