Aung San Suu Kyi on the past, the future, and the need for mercy

The Burmese democracy fighter spoke in Sydney last night on sacrifice, the 2015 elections in her country, and the need to temper justice by mercy. She visits Melbourne and Canberra next. 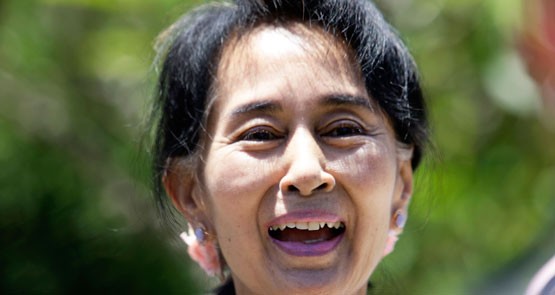 If Daw Aung San Suu Kyi was feeling the effects of a long day by last night, she certainly wasn’t showing it. Arriving in Australia yesterday morning, she had already held an event with the Burmese community and lunched at Sydney’s Government House before taking the stage at the Opera House to receive two honorary doctorates.

The Burmese freedom fighter is now 68 but looks decades younger, standing ramrod-straight as she was awarded doctorates from Sydney’s University of Technology, and the University of Sydney. The latter’s Vice Chancellor Dr Michael Spence managed to preface his remarks with several sentences in Burmese, saying he was inspired by watching her speak fluent French on being awarded the Legion D’honneur.

The Concert Hall was a riot of colour as the Burmese community turned out to greet their adored figurehead. Dressed in traditional costume, the women with exotic flowers in their hair, this was clearly a life-changing event. As Daw Suu Kyi came on to the stage — the Daw is honorific — she received a lengthy standing ovation, with many of her compatriots overcome with emotion.

Her story is one of enormous personal sacrifice in the service of her country.

Daw Suu Kyi is the daughter of the Burmese general Aung San, who led the country’s struggle for independence from Britain, and was assassinated in 1948. She married an academic and had two sons while living in Oxford, but in 1988 went back to Burma to nurse her dying mother. While there, she became active in the pro-democracy movements and found herself spokesperson for the cause. Placed under house arrest, she remained there from 1989 to 2010. She was able to receive visits from her husband and children only a handful of times.

Asked about this last night,  Daw Suu Kyi said it was not a sacrifice, but a “choice”. Her life has been about bearing responsibility for those choices and accepting the consequences, she said.

The Nobel Peace Prize winner said that when when she left for Burma, she told her 11-year-old son, “we are not the important thing … we are all trying to achieve something that is greatly needed for our country.” She added, “at that time he said yes, it was a good thing to do because he thought that Burma needed politicians like me.”

Asked about her own ambitions, she said she “takes life as it comes”.

“I do have my goals. I have my ideas and I have very, very firm principles but I hope I am flexible enough not to be bound by them, not to be shackled by them. But when I say I take life day-to-day it doesn’t mean that I don’t have long-term plans, but that I accept that things can change from day-to-day and that brings it perspective. You’re always aware of the fact that nothing is forever. For example, as a politician some are very much swayed by popularity, by public applause, but I think one also has to understand as a politician that this might not last forever and that helps you to keep things in perspective.”

Currently the leader of the Burmese opposition, Daw Suu Kyi is in Australia to rally support for a change to the Burmese constitution (for an explanation of this, see Damien Kingsbury’s story in Crikey today). She said last night that if she were to become President after the national elections in 2015, her three main aims would be the establishment of the rule of law, eternal peace, and constitutional reform. She added that the rule of law was not the same as law and order.

However, asked by the interviewer, journalist Hamish Macdonald, she said she was willing to compromise.

“There’s nothing wrong with compromise as long as it’s principled … I have always made compromises, that is what democracy is all about. I want to represent all those people who have really sacrificed everything, including their lives, for democracy in Burma.”

On the topic of asylum seekers she said, diplomatically, that this was subject to the rule of law, but that “justice must be tempered by mercy”.

After speaking for an hour, and telling us that peace and love were the most important things, Daw Suu Kyi left the stage. An extraordinary event. She heads to Melbourne and Canberra next.

I was fortunate to be at the Opera House to see and listen to Daw Suu Kyi and, as Margaret Saville writes, it was an extraordinary event. Ms Saville captures well the atmosphere and key moments of the afternoon. However, to ensure the record is straight, it took place in the Concert Hall, not the Joan Sutherland Theatre.

Thanks for letting me know, Lesley. We will correct it.

The big elephant in the room that she keeps dodging is issue of the Rohingya. Ethnic cleansing and brutalisation of a minority is nothing new to the Burmese … it would be nice if she is able to talk to that rather than hide under the “it is not constructive to criticize”. She is wilfully and silently supporting the pogroms being perpetrated against the Rohingya.