Be worried Aussie tabloids: the Daily Mail is launching online down under. That and and other media tidbits.

Watch out, Australia: Daily Mail to launch. British uber-tabloid Daily Mail will launch an Australian online edition next year in a surprise partnership with Nine Entertainment Co’s ninemsn. The Daily Mail‘s arrival will mark the second major UK push into the Australian online space following the launch of Guardian Australia six months ago. Mail Online — famous for its celebrity click-bait stories, long, salacious headlines and abundant use of photos — claims to be the world’s most highly read English language newspaper website, with 57.3 million monthly unique visitors globally. The site is well-known for its “sidebar of shame”, which often features shots of celebrity cellulite, “nip slips” and other faux pas. While an Australian launch been expected for months, the Daily Mail‘s pair-up with the soon-to-be-listed Nine Entertainment is unexpected.

Mail Online publisher Martin Clarke says the website will have a “strong focus on editorial integrity and campaigning journalism”.

“With the Daily Mail Australia operating alongside the ninemsn team, we’re aiming to create the largest digital news team in the country. This will provide Australians with a richer offering of news, lifestyle and entertainment stories in the unique MailOnline style. Most importantly, just like ninemsn.com.au, the Daily Mail Australia won’t sit behind a paywall.”

The site, to launch early next year, plans to hire 50 journalists, who will be based at Nine’s Sydney offices. — Matthew Knott

Kenny sues Chaser. Conservative commentator Chris Kenny has launched defamation proceedings against the ABC over a Chaser sketch depicting him having sex with a dog. As well as suing the ABC and production company Giant Dwarf, Kenny has also taken the unusual step of singling out one of the Chaser team members — Andrew Hansen — for legal action. Kenny told The Australian:

“The ABC has refused to apologise or make amends, leaving me with no option but to take this action. We all value robust debate, but disgusting, fabricated and offensive attacks aimed at silencing fair criticism are intolerable.”

Correction of the day. The Australian Press Council has found The Sydney Morning Herald guilty of breaching its principles in a profile piece on former News Corp Australia journalist Jonathan Marshall. The SMH published the piece — “Maverick who likes to bend rules” — following Marshall’s scoop on Alan Jones’ infamous “died of shame” comments last year. The press council found the SMH and reporter Damien Murphy had failed to take reasonable steps to ensure accuracy and fairness in its report. Here’s the acknowledgement from yesterday’s SMH:

Video of the day. Here’s a useful musical primer on the Daily Mail from UK comedians Dan and Dan. 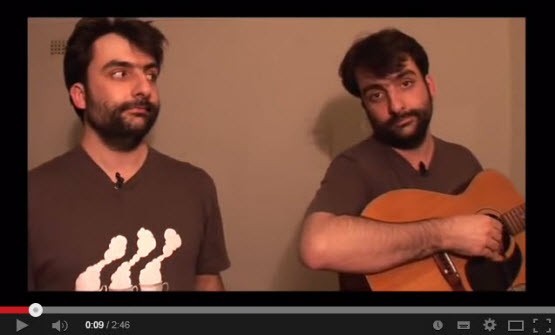 Kenny’s going to sue The Chaser – some might see that as another dog act?

Daily Mail: what out News!

Someone call the waaaahmbulance for Chris Kenny. How he can possibly say “…offensive attacks aimed at silencing fair criticism” while launching a defamation action with a straight face is unbelievable. A dog act indeed @klewso…