Caro on emus, Twitter, and frankness in reporting tough issues

In her first weekly column, Jane Caro shares her thoughts on wild animals, the magnificent George Monbiot -- and the need to speak more frankly on child sex abuse.

So, here it is, the wash-up of my week — the detritus that has gathered in the corners of my brain. The articles, the pictures and the comments that have stuck in my mind.

It’s been a week of abortion controversy courtesy of Zoe’s Law, crack-smoking Canadian mayors (thank you Jon Stewart and The Daily Show), Clive Palmer on Four Corners, and a back-to-the-future moment yesterday on Gonski and education funding via Christopher Pyne. It’s an extraordinary and — in my view — despicable backflip on education funding by Pyne. But I’m not going to tax you with any of those issues.

Rather, this weekly column will be devoted to the odd, the inconsequential, the funny, the neglected and the extraordinary. I want it to be a respite from the day-to-day argy-bargy of politics, for me as much as for you. Think of it as a Q&A episode — without any politicians.

Down Under emu invasion (sigh). So the rest of the world does not see us as the sophisticated coffee, wine and great food culture of our fond imaginings. This story from the US reveals the way Australia is still seen by the rest of the world: a place over-run by weird animals. 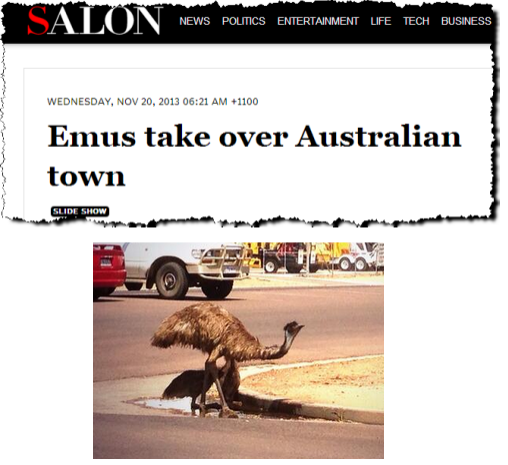 The Australian media didn’t go crazy for this two-legged invasion of Longreach, but Salon provided a full pic gallery.

Women to the side at unis. Is it OK to segregate men and women in audiences in secular universities to pander to religious sensibilities? This from The (UK) Telegraph:

This practice worries me. In some ways we seem to be moving forward on issues like human rights and equality yet, when there is a conflict, it still seems as if women’s rights are the first ones to be sacrificed — even if they sit on either side of the aisle rather than women being relegated to the back (of course, it would never cross anyone’s mind to put men in the rear). What if there was a religion that wanted to segregate blacks and whites in audiences, or Jews and gentiles? Would we be equally comfortable with that?

Obamacare rage. I really like this clip from Huffpo; I love the cool clarity of its logical thinking, and because Bill Maher makes me laugh. (He also looks exactly like my best mate Catherine Fox’s husband — which adds a whole other dimension, if you happen to know David.)

Tweet of the week. Here is my absolute favourite tweet of the week (I am hoping to make this a regular feature, given my addiction to Twitter via @JaneCaro, so suggestions are welcome — add them to the comments stream online).

It’s everything you could aim for in a tweet. Short, to-the-point, witty and yet so jam-packed with information that not a character is wasted. Virginia Woolf once said that she just wanted to make every phrase soak up as much truth as it could hold. George Monbiot is one hell of a sponge. Here’s another tweet that made me laugh out loud, but for a completely different reason: 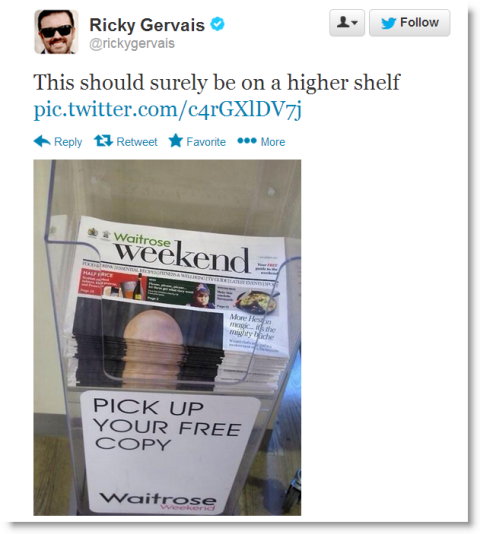 Telling it like it is on child rape. This article is a couple of weeks old now, but has stuck with me since I read it in human rights journal Right Now.

“It was 1975. A frightened school boy knocked on the door of the Presbytery at the Catholic Cathedral in the old gold mining city of Ballarat. He was seeking the person his devout family had taught him to trust above all others – a priest. Deeply troubled, he had come about a terrible secret. Only 14, he had been raped numerous times over several years by Brother Robert Best and Brother Edward Dowlan while a student at St Alipius. The heavy door swung open, and there stood a priest.

The priest gave his answer to the child’s plea for help by taking him to a grubby toilet block in Lake Wendouree and raping him. As the boy was being raped, he stared in despair out of the window where he could see the palatial bluestone mansion that so handsomely housed the Bishop of Ballarat. The boy was Stephen Woods. The priest was the notorious paedophile Gerald Ridsdale.”

I think it is brave, uncompromising and a model of how we should write about what is euphemistically referred to as “child sexual abuse”. Writer Anne Manne isn’t having any of that nonsense. Her vivid and blunt language makes us confront cruelty we’d rather not know about, and forces us to see for ourselves just what men of rectitude are capable of. Her fierce courage has my thanks and my admiration.

So that’s my week. I have a weird brain, I have often called it a grasshopper mind. It jumps from topic to topic, from mood to mood. God only knows what you’ll find here next week. I certainly don’t.

* Jane Caro will write a weekly column for Crikey

The Pell legacy IV: just who do cops, journalists and juries believe anymore?

Thanks, Jane. Look forward to your weekly column, whch btw you could call “The Grasshopper”. Cheers.

One question – “Is that Rupert’s head?”