The niche is the new mainstream in Australian media, as newspapers pick their battles more openly.

There’s a pretty clear division of responsibilities in political reporting in Australia. If you want economic news or discussion of major reforms like Gonski then you’d better go check out a newspaper and/or its website if you’re lucky. If you want to know what’s happening with asylum seekers and not much else then radio and television are your media. And so we see Minister for Immigration and Border Protection Scott Morrison grab almost three times as much broadcast coverage as Treasurer Joe Hockey, but only half his coverage in print this week. The niche is the mainstream.

The second set of polls since the election looked none too flash for the government, the weeks of argy-bargy with Indonesia taking their toll as the combined polls came out with a result somewhere around 50-50, with none of the expected (by most right-wing columnists) bounce from the opposition deciding not to allow repeal of the carbon tax without an ETS replacement. Somehow we don’t think Bill Shorten is measuring the drapes in the Lodge just yet though.

The broken promise on school funding brought Education Minister Christopher Pyne into the top five, while the continuing chaos in Victorian Parliament brought not just Frankston MP Geoff Shaw leaping back into the list but also embattled Speaker Ken Smith as the Napthine Government continues to live seemingly from day to day. A bunch of Federal Labor frontbenchers drop from the list as the focus sharpens more and more on the group to the right of the Speaker in Canberra. 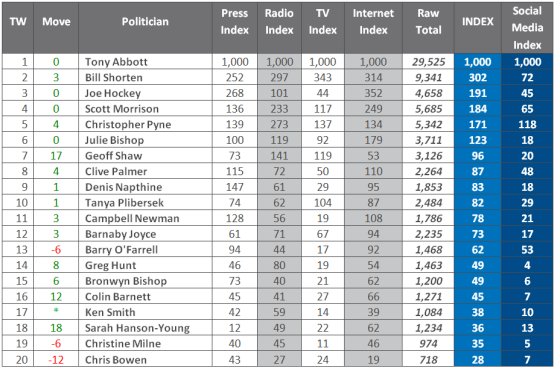 Tony Abbott totally dominating the talkback list for once, with most punters backing his non-apology to the Indonesians, a number suggesting that Julia Gillard person should apologise instead.

No surprise at the top, but Christopher Pyne a very clear second, most of the blowback from the Gonski cuts happening on social media, and happening quickly.

As the triumphalism and a fair bit of old school sledging rang around the Gabba and the country, English batsman Jonathon Trott’s return home from the Ashes hopefully reminded us all that it is only a game.