Can an exercise likened to a cult and linked to very serious health risks still be beneficial? Freelance writer Sally Whyte donned the lycra to find out. 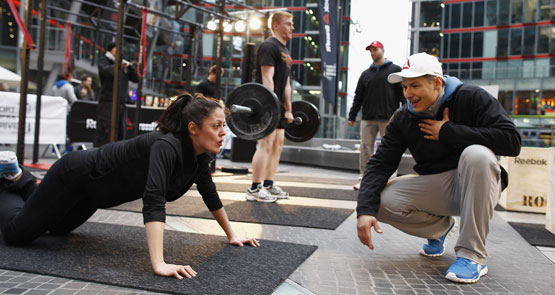 The walls are lined with photos of men and women lifting weights; taken from various angles, their well-defined muscles are straining but they look like they are having a grand ol’ time. A class is finishing as I arrive. Some people are sweating it out on the rowing machine, the only gym machine I recognise. I later learn that Crossfit — a wildly popular exercise cult — is supposed to be all about not using your body, not machines, to get fitter and stronger.

Behind the front counter the shelves hold containers of various protein powders, I don’t catch the names but they are all in caps, shouting their muscle-enhancing properties with almost as many XXXs as an adult shop.

The whiteboards are covered in charts and names and figures, and a scorecard of the “Paleo Challenge” the Crossfitters are doing this month. I make a joke about steroids at one point, but they don’t seem to find it very funny; I imagine they take photos of their meals on Instagram with hashtags like #cleaneating and #cleanliving.

This is where it all happens for “Crossfitters”, part of the exercise franchise that has developed a cult-like following across the world in the last few years.

According to its website, Crossfit was started by Greg Glassman, and the program has morphed into more than 10,000 Crossfit gyms, or “boxes” as they’re known, all over the world. It combines weightlifting with gymnastics and is all about fitness and strength. Along with the gyms, Crossfit has also spawned competitions where entrants compete to prove their fitness. The winners of the worldwide Crossfit Games were crowned “Fittest Man and Woman on Earth” (according to Crossfit) and each came away with US$250,000. The prize money would want to be decent —  a membership to a CrossFit box in Melbourne (or anywhere else in Australia) will set you back $200 a month.

I’m generally suspicious of exercise, but Crossfit has given me more reason than usual to be sceptical of a fitness craze I’m told people are “addicted” to. There have been various media reports here and overseas, warning of the risks of getting too involved  with Crossfit — vomiting, muscle destruction and even death. Early on in the crazy, The New York Times quoted Crossfit founder Greg Glassman admitting: “It can kill you — I’ve always been completely honest about that.”

Crossfit has been linked to rhabdomylosis, a condition linked to over-exercise where muscle breaks off and enters the bloodstream, potentially causing kidney troubles. Crossfit is renowned for its sense of competitiveness and with strength and speed emphasised, people push themselves harder than they normally would. The extreme workouts have also caused concern in chiropractors, but that doesn’t seem to deter Crossfitters.

“I make a joke about steroids at one point, but they don’t seem to find it very funny …”

Emergency medicine doctor and Crossfit instructor Michael Ray disputed the uniqueness of the risks in an article for the Huffington Post, arguing that rhabdomylosis has always been a factor in exercise and education is essential regardless of the program.

I’ve signed myself up for a class in Melbourne to see if it’s really as full-on as some in the media make it out to be — will I walk away with my arm in a sling or inducted into their testosterone-fuelled world?

Most of the class I see are watching one or two people as they swing on gymnastics ropes. They look a whole lot bulkier than the gymnasts I’ve seen at the Olympics on TV, but they can still hold themselves off the ground and get some movement going. Everyone here has well-defined muscles, but nothing like Quadzilla Robert Forstermann. These are the “Crossfitters” — no one seems to just “do” Crossfit.

Speaking to Crossfitters, the level of passion is as extreme as the workout. Aaria Speakman is on a waitlist to get into the next local Crossfit competition. She tells me it’s seeing her progress that has made her more passionate about Crossfit than going to a normal gym.

“I think of it as more of a journey than some intense fitness thing,” she said. “You really get to know yourself and teach yourself not give up.”

Prue Tinsey is equally positive, comparing the camaraderie in a Crossfit box to having a second family. “I have made a lot of wonderful friends. Everyone is there to give 100% and there’s always someone next to you cheering you on and helping you push your body to a level that it has never been before.”

I’m nervous and do my research before jumping in. A search of the Crossfit hashtag on Instagram is a mix of muscles, motivational quotes and Crossfitters documenting their injuries. I feel like I should have my physio on speed dial.

At my local Crossfit “box”, everyone starts with a one-on-one session before going to a class. Before my class I’m given a spiel about rhabdomylosis, but my instructor assures me not to worry, that the warning is only necessary because of “stuff in the media” and he knows no one who has suffered from it.

My instructor listens attentively as I list my previous injuries, and as a beginner, I’m not given weights to lift, or even the eight kilogram bar, but a broomstick to get my technique right. I’m on my guard the whole time, thinking that there must be a catch, because I’ve never sweated in a gym before and enjoyed it.

We spend most of the hour doing squats and learning different types of lifts with the broomstick. If the workouts stayed at this level, I’d have more broomstick technique than Harry Potter, but if I was to continue there would be weights involved.

The final workout involves squats with throwing and catching a medicine ball in between each one. I also do the first pull ups of my life, aided by an elasticised band that helps me get my chin back above the bar each time. The pace is fast, but so far manageable.

I quickly develop a Pavlovian response to the high fives after each set of reps and my instructor tells me a story of a man losing four or five kilograms a week. I leave with a sense of achievement (and no injuries), the dopamine in my system telling me that I just might find the money to keep going. Maybe even I could be a “Crossfitter”. I imagine this is how it starts, the addiction to Crossfit, but I keep my credit card in my wallet and decide I’ve got the rest of my life to become a body builder.

From what I saw, there was nothing too scary about Crossfit. The exercises were reasonable and I didn’t get a “cult” feeling. Perhaps if I’d gone further down the rabbit-hole I would have seen the intensity and pressure that’s got the fitness world talking.

Sally, you should have opened with your closing para – CrossFit, like any exercise form, has its detractors and fans, its risks. And Jackson is right, go for a few months, and then you’ll be in a position to talk about what the training is really like, what the community are like (we’re usually pretty fun, if a bit intense), and whether the FUD about injuries and illness are true (they happen, but they’re unusually rare).

As a CrossFitter (albeit a pretty crap one) of nearly two years, it’s among the most fun forms of exercise I’ve ever done.

The extreme workouts have also caused concern in chiropractors, but that doesn’t seem to deter Crossfitters.

And so it bloody well shouldn’t!

I suggest you look at what a chiropracter actually practices, and tell me why there opinion is worth any more than my 11 year old sons!

I thought Crikey would be a little better than this.

their- not there…
obviously

Gimmicky hype works to get people to pay too much for exercise.

There will be another fad in the not too distant future and the acolytes will be just as bright eyed.

Personally, I can’t see myself doing anything where you have to do high fives all the time. Always seems more of a thing you do with 10 year old kids to amuse them.