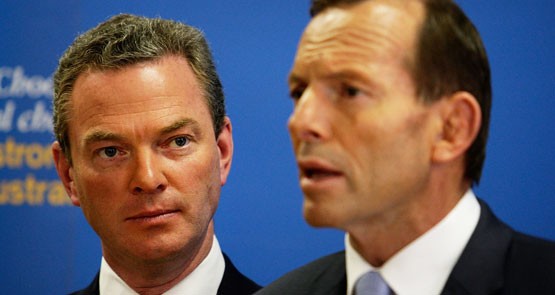 Well, well, well. So the Coalition lied about its Gonski “unity ticket” with Labor.

The Coalition’s commitment that each school would get the same funding as under Labor’s education reforms has been abandoned. Now, merely the same quantum of funding will be provided, but not necessarily to each school. That’s the critical change, and the one that transforms a backflip into a lie: parents don’t care about the overall funding “envelope” — they care how much funding their schools are going to get, and now that’s at risk.

Education Minister Christopher Pyne — who coined the term “con-ski” — doesn’t like Labor’s needs-based formula, preferring instead the Howard government’s Socio-Economic Status formula, one mostly damned as profoundly flawed. He and Tony Abbott have a long history of arguing that the SES formula is superior to anything the Gonski panel devised. Pyne yesterday said the SES approach would be “a good starting point for a school funding model”.

So under the government’s new “commitment” — at least until the Coalition decides to change its mind again — Pyne could hand all of the additional funding promised under the Gonski reforms to wealthy private schools that benefited from the SES formula, arguing that this is consistent with his idea of a needs-based model and within the promised “funding envelope”.

While that is an unlikely scenario, the problem with Pyne’s rejection of a needs-based formula in favour of his beloved SES model is that the funding model, as much as additional money (and the related performance information and decentralisation reforms), is central to the Gonski panel reforms. Australia’s fading performance in international education comparisons has primarily been driven by the poor performance of disadvantaged students. It is more effectively targeting resources at those disadvantaged students that will improve our overall educational outcomes — and that is the core of the needs-based Gonski funding model.

Pyne’s approach, even in maintaining the “funding envelope”, will guarantee we continue to get the same results as we do now — with disadvantaged students performing poorly academically, while students from middle and higher-income backgrounds continue to benefit from additional funding.

The policy’s bad enough. But the politics are worse. Has ever admitting a lie been handled so ineptly in recent Australian history? Pyne made a half-arsed effort to blame Labor, insisting on a “Shorten shortfall” (which is up there with Labor’s “Abbott axe” for marketing genius), as if voters remember that Opposition Leader Bill Shorten was education minister for five minutes. The ABC’s Steve Cannane nailed Pyne on this last night on Lateline when Pyne tried to claim he was unaware that Labor, having been told by WA, Queensland and the NT they weren’t interested in Gonski funding, had returned the funding to the budget before the election. Cannane pointed out that shadow Treasurer Joe Hockey had complained about exactly that well before the election.

Then there was the “well, no deal was actually signed” excuse, presumably designed to infuriate not merely a state like Victoria but also the Catholic education sector, both of whom reached agreement with the previous government on funding. Pyne also failed to contact his state and territory counterparts to advise them he was abandoning the Coalition’s commitment, eliciting a furious response from the NSW government both about the decision and about Pyne’s high-handed manner. So much for a “grown-up government” when Barry O’Farrell sounds like an adult lecturing an errant child. It was so inept a performance from Pyne that even a right-wing commentator like Jennifer Hewett gave him a kicking.

This morning, Pyne scrambled to recover, announcing additional schools funding for the non-Gonski states, albeit a small fraction of the funding they would have received if they’d done a deal with Labor, though without getting any of the commitments on additional funding, or improved performance reporting, that the Gillard and Rudd governments demanded.

The problem for the Coalition isn’t merely that the Gonski reforms are popular with voters and the current SES model is widely disliked — even the majority of Liberal voters want private school funding cut and think public schools should get the larger share of Gonski funding. It’s that education remains a Labor issue. Even as voters’ trust in Labor to handle policy issues collapsed after the election, it still retained a narrow lead over the Liberals on trust to ensure a quality education for all children, according to Essential Research. That’s one of only two areas, the other being a fair industrial relations system.

As anyone in advertising will tell you, it’s much easier to convince people of something they already agree with. Pyne is blundering about on Labor’s home turf confirming what people already suspected about the Coalition’s approach to education.

I thought they had a ‘mandate’ to keep the funding the same?
Do they or do they not believe in the idea that they were voted in with a ‘mandate’?
It seems that the idea applies only to those promises that the LNP are going keep.

Presumably the Australian will make as big a deal about this as it did with Gillard’s changed position on carbon pricing.

So the Libs lied about education reform. Libs always lie. It’s in their DNA. They lied about the carbon tax too.

Yes, the Libs lied about the carbon tax.

Study the evidence at http://fairmediaalliance.wordpress.com/2013/04/26/there-will-be-no-carbon-tax-under-a-government-i-lead-but-lets-be-absolutely-clear-i-am-determined-to-price-carbon/

But that’s enough about their minor lies. The Libs also lied us into war. Isn’t that treason?

There’s no Independents that changed circumstances?