Campaign to jack up online GST is protectionist and lazy

In demanding the lowering of the GST threshold for offshore purchases, the states and retailers want more cash from the federal government or consumers. 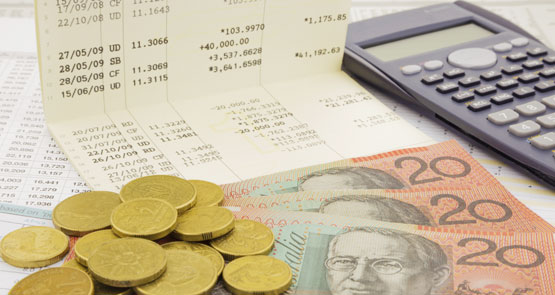 Proposals to reduce the GST threshold on goods purchased offshore to as low as $25 would transfer revenue from the Commonwealth to the states to cover the high cost of processing low-value items — or punish consumers by adding to the cost of parcels above and beyond the GST.

And it would amount to protectionism for lazy Australian retailers.

As Treasurer Joe Hockey meets his state and territory counterparts today, there’s a renewed push both from state treasurers and from retail lobbyists to lower the GST threshold on low value packages. The usual retail suspects, such as Myer’s Bernie Brookes and the inevitable Gerry Harvey, are backing a push from the states to lower the threshold for imported purchases from $1000 to $25.

The states — hit by the slow growth of GST revenue as Australians save more and switch to non-GST liable consumption — want to tap into rapid growth (off a low base) in online purchasing by forcing consumers to pay GST on offshore transactions.

But as Treasury explained in a report in July 2012, collecting more GST comes at a cost, and the lower you set the threshold, the higher the cost of collection, until it overtakes the revenue gained from collection. There’s thus a curve for the ratio between collection cost and additional revenue. 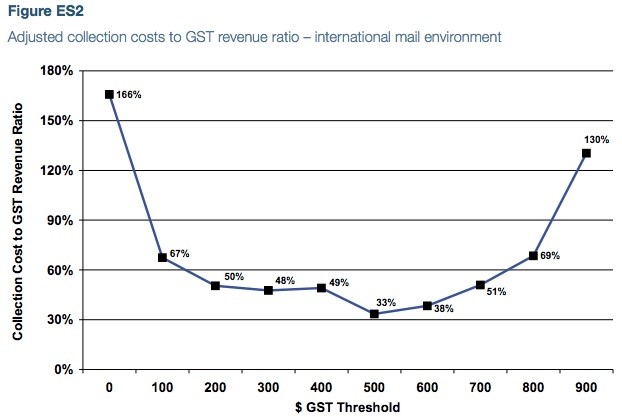 Once you set the threshold below $100 (where revenue collection is already hideously expensive — you lose 2 in every 3 dollars you collect), the net revenue rapidly diminishes to nothing and you start having to spend more on collection than you get from revenue. Moreover, this is for international mail only — air cargo revenue is more expensive to collect.

There’s one way for governments to avoid collection costs, and that’s to make consumers pay not merely GST, but the additional costs of processing their packages and collecting the revenue. This is the UK approach and Choice has shown this could potentially blow out the cost of a $20 package to more than $35. It amounts to double taxation on consumers.

That’s fine by retailers — what they want is an internet tax, to discourage Australians from shopping online overseas and drive them back to local retailers’ poor quality, high-price offerings. As has been repeatedly demonstrated, however, the price gap between Australian retailers and offshore sites for the same products is far greater than a 10% GST and, likely, any processing costs governments try to slap on consumers. Lowering the threshold below $100 would, in effect, be a tariff on imports.

The states don’t mind either — just so long as they get their hands on a few hundred million dollars of additional GST revenue, given they don’t have to bear the cost of collection.

What Treasury’s analysis doesn’t grapple with is the extent to which either offshore providers — like Amazon, which has fought long battles with US states over efforts to collect taxes — or Australian consumers will co-operate with tax collection efforts. Effective collection will depend on extensive government surveillance via either a consumer’s internet purchasing history or physical inspection of mail. How happy are you to have the government examining what books you’re ordering from overseas?

That’s before you get to the sort of problems that the men and women (well, woman) sitting around the table with Joe Hockey don’t understand: how will you levy GST on fast-growing download purchases — movies, games, software, books? If sites like Netflix or music streaming services open Australian sites, GST can be charged. But if you’re buying online direct from a provider offshore, there’s no way to levy GST unless the provider is willing to co-operate.

And expanding the GST to cover low-value goods would be a blatant breach of the Coalition’s election commitment not to change the GST while in office.

The GST was supposed to be an efficient, easily administered and low economic impact tax. The states and retailers want to turn it into an expensive means to help prop up a sector that after generations of gouging captive Australian consumers, can’t handle competition.

I imagine the battler’s friend Gerry would want us to fork out for electronic purchases as well as physical items, but I wonder how you would do it? Do you pay GST on an iTunes card, then another 10% on checkout (assuming Apple comply)?

Crikey, you do go on, Bernard. Can’t understand the hysteria myself. If you buy something in Australia you pay GST. If you buy something from OS but collect it in Australia then you should pay GST – the outcome is the same. The high threshold in Australia is unusual. Below is the UK VAT guidelines.
“For goods sent from non-EU countries you have to pay VAT if they’re worth more than £15 and on all items sent to the UK from the Channel Islands.
If it’s a gift, for example from a friend or relative, you only have to pay VAT if it’s worth more than £36.”

I only buy things online when they can be described clearly and unambiguously because when I have bought apparel items from a catalog I have been disappointed with the fit and quality of materials.

I will buy items over the internet that retailers won’t import.

I can’t imagine buying furniture and other bulky items over the internet so I really don’t know what Harvey Norman and Myer are grizzling about. I never shop at either store preferring Aldi for electrical goods and Target for clothes.

Yet another fail from BK.

The biggest cost in collecting the GST on goods purchased from overseas and valued under $1000 will be the postage stamp.

Modern IT systems using bar code scanners can automate the entire process for over 90% of inbound parcels. Most parcels coming into Australia come via DHL, Fedex, Postal EMS, TNT, Toll and other sundry international shipping companies. All of these inbound parcels contain a barcode and a customs declaration. All of the information about the goods inside the wrapper are available from the barcode.

An updated customs service which is urgently needed with or without a GST threshold would simply scan the barcode and generate a post paid GST bill that would be sent separate from the parcel being delivered. And the post paid bill would then be paid – online – like any other bill we get in the mail for our phone, gas, electricity, council rates, water bill, car insurance etc etc. And yes there will always be a certain amount of uncollected bills, but to worry about the 5-10% of unpaid GST bills while missing out on a billion dollars and rising in uncollected GST is simply ridiculous. To apply that logic we might as well give up on all GST levies as the black economy is easily leading to a massive loss of GST that tradies etc and their customers have avoided.

The process is so blindingly simple you have to ask why is there so much resistance by governments from either side of the house to fix this growing loophole in the GST system. While the lazy money has been on the so called high cost of doing it – the obvious answer is that is has been a nice little bone to throw to the middle classes who now regard their GST free international purchases as an entitlement.

The Treasury report that so many like BK and fellow travelers like to quote from was a stitch up designed to get the answer the government wanted. It did not look at how the existing process could be vastly improved and almost entirely automated. It simply assumed that an army of public servants would continue to operate the same ridiculous system now in place that makes it a chore to actually bring into Australia anything worth more than $1000 and pay the GST on such. It’s like dealing with a shipping clerk from 1810 at the Dutch East India Company.

Meanwhile, the whole snotty attitude BK brings to this issues with his constant put downs on Australian shopkeepers is simply offensive to anyone who operates a small retail shop and has to put up with an endless parade of lazy people who use their shops as a show room to try on and check out what they always intended to buy online.

I am not a shopkeeper just a consumer and a taxpayer like everybody else and it’s beyond a joke that this scam continues to be allowed to operate. The tax dollars have to come from somewhere to pay for the services the States provide and there is no free lunch here. We either pay a few dollars more on our $99 imports or we will pay it somewhere else.

This article more that ever highlights how it really is time for Crikey to start having an editor in charge of the daily run sheet and actually start sending back articles for more work when they clearly fail to be more than the personal opinion of the author in question – who like so many other members of the entitled middle classes doesn’t want to pay GST on their luxury goods bought online.

Interesting points from Simon Mansfield re the Customs service.

A tip-off to the big retailers: with or without a GST on online goods I will frequently buy them rather than visit your large impersonal stores with either a dearth of staff (hello Myer, DJs) or staff with a dearth of product knowledge and/or people skills.