Abbott’s report card. Tony Abbott’s tumultuous university days endure. The PM’s academic transcript from Oxford hit the internet late yesterday after being acquired by journalist James West. While the Rhodes Scholar became a boxing blue, he was no model student. You seem to have struggled with philosophy, huh Tony? And it looks like your morals could use some work … still, he wasn’t too bad at Communism. That’s a turn-up for the books. 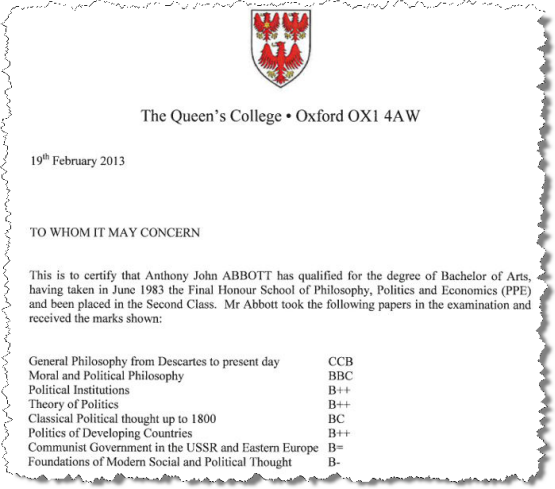 But the PM salvaged other experiences at Oxford. In a speech to Oxford’s Queen’s College in December 2012, he said: “At Oxford, I first met George Brandis, now the shadow attorney-general; Don Markwell, the former warden of Rhodes House, now  director of the Menzies Research Centre; and Tom Harley, Alfred Deakin’s grandson, and a long-term member of the federal executive of the Liberal Party.” So at least he formed a useful old boys’ network.

But our boxing-blue did better than saxophonist-come US President Bill (“I didn’t inhale“) Clinton, who dropped out of Oxford aged 24. David Cameron reportedly received poor grades while at the Heatherdown School before donning the tails at Eton, but went on to obtain a first-class degree from Oxford and join the elite Bullingdon Club, which led Boris Johnson to allegedly dismiss him as a “girly swot“.

Defence shakeup. Defence is bracing for the biggest shakeup to its highly rigid workforce since the ADF became an all-volunteer force in 1972, with the introduction of genuinely part-time service members and flexibility — which family-oriented women and men in Defence (as well as specialist medical and technical professionals) have long been crying out for.

Known as “Plan Suakin“, it was launched today by Vice Chief of the Defence Force Air Marshall Mark “Binnie” Binksin and Assistant Minister Stuart Robert with little of the usual Defence fanfare. This is likely to be very last “efficiency” reform that Defence can deliver before cuts start removing vital organs. What’s unlikely to get mentioned is how reducing service members’ hours will now also reduce their benefits and save the department much needed breathing room in its budget.

Are toilet-reviewers the new food-bloggers? Crikey would like to alert readers travelling to New York of an unparalleled opportunity: professional piss-taking. A newly formed digital start-up, ToiletFinder, is seeking the best professional toilet reviewers in a city of 8.3 million people. Reviewers will be paid $100 a day during the promotion, with one lucky star securing a paid full-time dunny gig.

But be warned; this is no job for amateurs. According to an employment ad placed on Craigslist by the creator of ToiletFinder, potential contributors must “have a college degree from a 4-year university majoring in the humanities or something similarly rigorous”. You must “be a talented and humourous writer (very difficult combination to find),” and “share in the overall vision of making it easier for people to find a toilet”. That’s quite some vision.

All in all, we can think of better jobs. What’s the worst job you’ve ever done? This Crikey scribe would list being a temporary secretary as pretty bad — you get a million phone calls and have no idea who anyone is. Being a work experience kid on the endoscopy ward was similarly not a career highlight (quite full-on for a 15yo). Send us your worst job.

Snail-mail takes a slump. On the back of a horrid financial year, Australia Post are reportedly planning to cut next-day mail delivery from regional centres such as Bendigo, Geelong, Ballarat, and Morwell, while moving mail-sorting operations from regional areas to the Dandenong Letters Centre. We put this to Australia Post, who said this:

“Australia Post met with union representatives in Victoria and New South Wales recently to discuss the continuing challenges for our mail business, which lost more than $218.4 million in the last financial year. One option that is being explored is shifting non-local country letters processing to major regional and metro centres to create greater efficiencies.”

Older people in revolt. Crikey has been having a go at older people lately, as the Productivity Commission and the Grattan Institute release reports urging for a higher pension age and a less generous superannuation scheme towards the over-60s. Yesterday we ran stories by Bernard Keane and our excellent 82-year-old ageing expert Everald Compton which called for less generous tax and pension arrangements for older people. Well, we’ve had a lively response from readers — both for and against. Many pointed out that it can be very hard to get a job as a worker aged over-55. We’d like to hear your stories about this. What’s it like looking for work as you get older? Do you feel discriminated against? And what should be done about it? Email us your contribution, and please state whether you’d like to remain anonymous.

Consulting firms have made millions off the failed sub deal

Can anyone tell me what a grade of CCB means? More c than b – it will never be that simple!