The demand that we trust governments to determine what we should know about national security matters is discredited by their performance over Iraq.

The best part about the then-Defence Signals Directorate slides detailing surveillance of Indonesian President Susilo Bambang Yudhoyono, his wife and other senior Indonesian political figures are the background swirls.

Some junior DSD officer has added blue and orange swirls and curves to the background, over which — as if to make life easier for the media outlets that will eventually reveal them — have been clumsily added the Australian government crest, the Defence Intelligence area reference and “Top Secret Comint”. 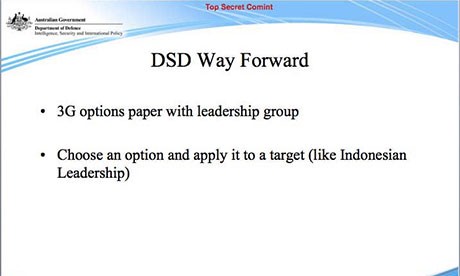 Why the swirls and curves have been added to the strictly no-nonsense DSD presentation isn’t clear, beyond that PowerPoint — the ultimate “evil of banality” software — almost compels one to add such flourishes when faced with the empty white slide and black Times New Roman text. Perhaps they were intended to suggest the oscillations of radio frequency communications intercepted by DSD, or the dense wiring of an internet connection, or maybe, given there’s a faint oval shape to them, it’s the suggestion of an eye, since we’re one of the five English … um, speaking eyes of the spy world.

The Australian Signals Directorate, as it’s now called (formerly the DSD), has sailed serenely through the trashing of our relations with Indonesia, and the damage inflicted on a new government that had nothing to do with its actions, with little attention. Its errors of judgement in taking so grievously offensive a step as spying on the Indonesian President’s wife merely because it could, rather than for any particular intelligence value, and then committing extensive details of its actions to a document sent outside the agency, including apparently to foreign nationals, remain for the most part unquestioned.

Instead the focus has been on media outlets that released the result of ASD’s misjudgements, and particularly the ABC. This has mainly been from News Corp, although Christopher Joye, a banker who purports to cover cybersecurity for the Financial Review (he “broke” the story that “Chinese hackers” had “successfully accessed” publicly available ABS data), joined in on the weekend, suggesting the ABC could be prosecuted.

If the ABC had declined to use the story, The Guardian would have released the documents anyway, and there would have been no ABC effort to check with the intelligence community as to what was truly sensitive and potentially damaging in the slides. But never mind that practicality.

The rationale for criticism of the ABC — well, in News Corp’s case, the fig-leaf for its ongoing campaign against a competitor — is that intelligence agencies and governments can make better decisions about national security matters than media outlets, and they know better than journalists, editors and producers what needs to be kept secret. In short, we should automatically trust governments and intelligence officials on national security matters.

This argument is demonstrably false.

The easier debunking is in relation to politicians. As has been repeatedly demonstrated, the Obama administration, like previous US administrations, leaks secret information quite readily if it serves its political purposes. Australian governments do this as well: for example, then-foreign minister Alexander Downer’s office leaked a secret report intended to damage then-intelligence analyst Andrew Wilkie in 2006 (to News Corp columnist Andrew Bolt, who has attacked the ABC over the Indonesian revelations; apparently revealing secret information is fine if it helps the Coalition), and information was leaked by the Howard government with the intention of demonising ex-terror suspect Mohamed Haneef.

Moreover, governments now habitually rely on selective secrecy even in circumstances where it is not warranted. We have had to rely on WikiLeaks to provide what governments across the Pacific region should have given us long ago — the current draft of the Trans-Pacific Partnership’s intellectual property chapter. The material provided recently by WikiLeaks confirms that the United States is continuing to push for draconian restrictions on basic freedoms and consumer rights in the name of copyright, and confirms that Australia is being far more supportive of this than our bureaucrats have so far made out. The TPP process is often described as having been conducted in secret. In fact, this is not strictly accurate: industry groups, particularly large pharmaceutical companies and the US copyright cartel, both of which have a strong interest in hardline copyright restrictions, have had privileged access to the draft of the TPP text in order to, in effect, provide instructions to US trade negotiators.

What about intelligence officials? Are they any better judges of national security and the national interest? Should we trust them? Such agencies benefit from secrecy; they enjoy far less scrutiny and far less accountability than other bureaucrats and can rely on secrecy to hide their shortcomings and breaches of the law. But the issue of self-interest aside, judging by their record over the last 10 years, the answer is a clear no.

US and British intelligence agencies, with encouragement from their political masters, provided an at best faulty and at worst deliberately misleading justification for the attack on Iraq. Australian intelligence agencies performed a little better than their US and UK counterparts on the weapons of mass destruction issue, but not well enough: the Flood Report criticised the Defence Intelligence Organisation and the Office of National Assessments for failing to be sufficiently rigorous and sceptical regarding preconceptions of Iraqi WMD, as well as failing to make clear the difference between hard evidence and the opinions of analysts. In fact, the report found there was “little evidence of a consistent and rigorous culture of challenge to and engagement on intelligence reports from collectors”.

That war cost the US $1.7 trillion (and rising, due to healthcare costs over coming decades) and cost the UK and Australia billions of dollars. There have been four primary outcomes of that war. First, the deaths of hundreds of thousands of Iraqis — as of 2010, life expectancy in Iraq was still below where it was in 2002. Second, it funneled billions of dollars to US companies, including defence, health, oil and services companies. It also served to redirect resources from Afghanistan, leading to a disastrous resurgence in the Taliban in that country, such that the US, the UK and other allies like Australia will be leaving Afghanistan to a civil war when they depart. And, as intelligence agencies now admit, it incited more terrorist attacks in Western countries.That is, thanks to the intelligence agencies and politicians who now demand that we trust them, we spent untold amounts of money attacking Iraq to make ourselves less safe. It would be laughable if if hadn’t also costs the lives of hundreds of thousands of Iraqis, Americans, Brits and others. And not one intelligence official or politician has ever been held to account for that truly colossal error –if error it was.

On that basis, who can convincingly argue that we should trust intelligence agencies to know the national interest better than anyone else?

Who can be trusted? One of the key journalists for the revelations by NSA whistleblower Edward Snowden, long-time Washington Post journalist Barton Gellman, wrestled with this issue 10 years ago in the aftermath of the Iraq WMD debacle and suggested that the answer, ultimately, is no one, that the determination must always be a contest between advocates of transparency and the governments and their agencies that oppose it.

The reflexive posture of intelligence agencies, politicians, their media mouthpieces and security state spruikers that we must always trust governments on national security is plainly not credible, and grows less credible the more we learn from whistleblowers about the illegalities, errors and misjudgements of spies and the incompetence, self-interest and corruption of their political masters. Unless they think whistleblowing is about to cease (an outcome governments are working desperately hard to achieve), this will continue to be a contested space. Mindlessly chanting “terrorism, terrorism, terrorism” has never been convincing and is now less so than ever before.

ThanksBernard for remembering history. And always examine who is criticising the ABC.

last week an Indonesian media proprietor suggested that if Snowden’s revelations had concerned Indonesian spying activities and had surfaced in Indonesia then the media would not have published them and would not have embarrassed the government. this is probably true, but beside the point. The revelations of our spying on Indonesia is not a discreet story, but one of a series of revelations emanating from the activities of whistleblowers and agencies such as Wikileaks. This has been a main story for some years now and the revelations of Australia eavesdropping on Indonesia merely an episode in that ongoing story. Given our ongoing interest in this wider story it would have been quite significant if either the ABC or the Guardian had chosen to ignore or suppress their knowledge of Australian spying activities in Indonesia. Bolt et alia casually ignore the wider context in which these revelations have occurred.

Too right. Commentors – amateur and proffessional – on both sides of the left/right divide have either missed this essential point or are being (intentionally?) distracted by the politics.
“Agencies” like the ASD are loose cannon at best. Oversight is most overdue but unlikely to be born out of the current mess.

It is for the above reasons that I am a great admirer of Andrew Wilkie. While the rest of the spooks were telling the politicians what they wanted to hear about WMD, Iraq and Saddam Hussein, Wilkie had the guts and honour to follow the truth and was roundly condemned by the usual lineup of suspects starting with the lick spittle government of the day and the venal Murdock press. While I don’t necessarily agree with all of his policies I certainly admire him for his honesty.

And the lesson that comes from all of this? Don’t trust the spooks for they are virtually unaccountable and don’t trust the government because they and the spooks only answer to one master – their own self aggrandisement. Therefore the current hysteria about ‘terrorism’ is, in many ways, both a self fulfilling prophesy of these two and, in my mind, just another way of keeping the populace afraid which is to the greater advantage of these two groups.