The Education Dept goes fishing. The Building the Education Revolution may be archived in Labor history with Christopher Pyne also headed “back to the drawing board” on Gonski, but there appears to be a lingering interest in the benefits of the BER scheme.

One tipster told Crikey that the Federal Department of Education has asked Catholic schools to send them electronic brochures showing what a great job they did building school halls and classrooms. Why? “Is it because Catholic schools built their BER projects for less than it cost the public system, which was bound by a lot more red tape?” asked the source.

“I’m guessing the new Education Minister Chris Pyne wants to be able to hold up a brochure in Parliament showing how St Marmaduke’s Catholic primary school in East Wherever managed to build a school hall for 200 people for $1 million … while the same hall built down the road at East Wherever Public School cost double — another example of Labor waste!” said our tipster.

Crikey contacted the department but did not receive a response by deadline.

Tony Abbott takes out the trash. If there’s one thing journalists supposedly love more than digging through a politician’s trash, it’s watching a politician dig through their own trash — especially when they’re wearing matching exercise gear. This picture ran on page 6 of today’s Age and  features what appears to be beer bottles and four wheelie bins — surely more than the standard issue in Sydney’s Forestville. Perhaps that’s Evian water in the small recycling trolley – maybe even a Melbourne Bitter? 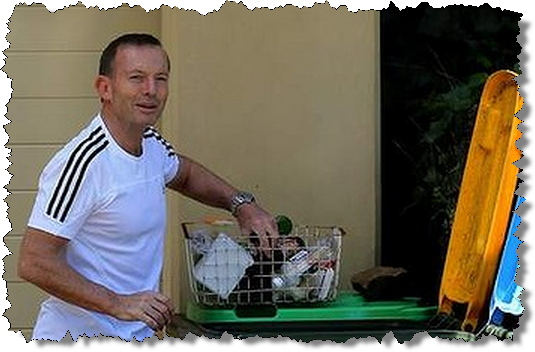 Vintage Keating. From time to time, we ask readers to send through images of politicians in their former pomp. Here’s a gem sent in by veteran journalist Angela Catterns. It’s Paul Keating in the Sydney Triple J studios sometime during the early 1990s. We guess the studio’s decor and provocative artwork — like the poster? — would clash with the Former PM’s elegant Sydney office, which recently played host the ABC’s Kerry O’Brien.

“I remember he was pleasant and good-humoured. It was a time when politicians were interested in courting the youth vote,” recalled Catterns. “I do remember everyone at the station was very excited when he came in — surrounded by a posse of blokes in dark suits talking into their wrists!” (for people not familiar with the prime ministerial security detail, these guys have some kind of secret-squirrel radios up their sleeves — literally).

Missing ministerial mo’s. There’s been a visible absence of moustaches on our male politicians this Movember, with many failing to join Australian pace-man Mitchell Johnson in mustached magnificence. Perhaps our pollies were hesitant to front the first sitting week of Parliament with a furry lip? Never fear. Crikey readers have vivid imaginations. Last week we brought you Scott Ludlam. Today it’s Joe Hockey’s turn. But wasn’t it unkind of our Photoshop whizz to use a pre-weight-loss pic of the Treasurer? He’s much more svelte now. 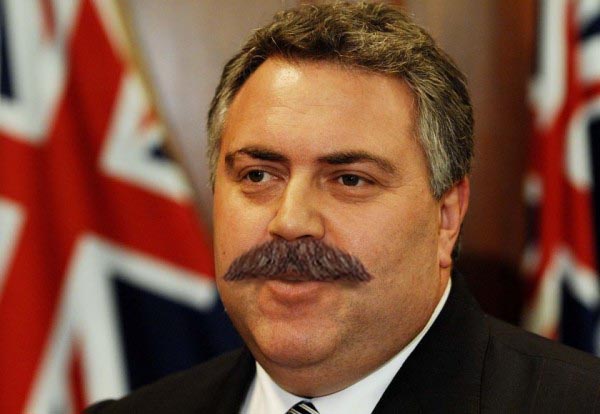 Kevin leaves the ‘Big House’. Thanks KRudd, we noticed your departure from Parliament. We’d also like to inform you that “the Big House” is a colloquial term for jail that is often used by “the young folk”.

The peculiar silence around the wasted billions of JobKeeper

Keynesian trap of spending: what of construction post-BER?

With regard to Tony Abbott’s bins, you should check facts before asserting it is more than the standard number of bins.

Looking at the photo, they would be the standard Green for green bio-degradable waste, Yellow for recycling bottles and containers, Blue for recycling paper, and (unshown) probably Red, which is standard garbage.

These are common in many councils in Sydney, so your cheap shot makes you look silly.

Apropos ‘the big house’, you’re wrong.
It may be a colloquialism for prison (aka jail) in the US, but it’s also used to describe something like the manor house, from the perspective of the plebs in the cottages, gatehouse and so on. Viz: I’ve been called up to the big house.