Tidbits: from Deng ‘encounters’ to surfing in Bondi

Our Sydney reporter brings you a round-up of tidbits from around the world -- ranging from that story about Wendi Deng to some cultural treats from the streets of Sydney.

The newspaper story quotes “sources close to Mr Murdoch” as saying staff at his home in California claimed that 60-year-old Blair and Deng, 44, stayed there overnight at the same time on weekends in October 2012 and April this year — without Rupert’s knowledge.

Murdoch has always forged strong links with politicians, but the links between Blair and the Murdochs was particularly close. According to journalist (and Media Watch host) Paul Barry’s recently published book, Breaking News: Sex Lies and the Murdoch Succession, Blair went out of his way to befriend Murdoch, telling tabloid editor Piers Morgan that “it is better to be riding the tiger’s back than let it rip your throat out” (see page 295 for more).

Blair, who was PM from 1997 to 2007, revealed further details about the relationship when he appeared before the Leveson inquiry into press practices in May last year. He said during his time as PM, he had had 31 dinners, breakfasts, lunches, meetings and the occasional weekend with Rupert Murdoch. Their friendship had first come to light in 1995, when, as opposition leader, he had flown to Australia to attend’s News Corp’s annual conference at Hayman Island.

Blair says he had a “working relationship” with Murdoch until he left office, but “now it’s different“. He added that he had developed a more friendly — and “healthier” — relationship with the media mogul after 2007, becoming the godfather to Murdoch’s daughter in 2010.

Wendi Deng and Rupert Murdoch were married in 1999 and have two daughters. They separated in June this year and were divorced only a few days ago.

When Murdoch introduced the then-Labour leader to the Hayman Island gathering in 1995, he told the crowd, “if the British press is to be believed, today is all part of  a Blair-Murdoch flirtation … If that flirtation is ever consummated, I suspect we will end up making love like two porcupines — very carefully.”

Swiss say ‘non’. Yesterday’s referendum in Switzerland on executive salaries has refocused attention on an issue that is a persistent problem for Australian companies. Voters were being asked whether companies should be restricted to paying their highest-paid workers 12 times that of the lowest paid employees — the so-called “1:12 initiative” (there’s a good story behind the Financial Times paywall here).

The results came through early this morning — two thirds of the Swiss population voted against the measure. However, it has sent a message to Swiss companies that the topic of excessive corporation remuneration will not go away. In March this year Swiss voters approved the so-called “fat-cat initiative”, which gave company shareholders a binding vote on managers’ pay and blocked golden handshakes and severance packages.

This issue was aired here in Sydney last Friday when shareholders in retailer David Jones voted against its executive pay plan at the AGM.

If 25% or more of shareholders vote against the report next year, the second “strike”, a vote will be forced on whether the board should be spilled.

Summer pic. Sydney photographer Steve Christo is one of the best photojournalists in the world, in my opinion. He started work at the Sydney Morning Herald in 1987, shooting news, sports and features. Steve switched solely to sports photography in 1994, covering the Olympic Games in Sydney, Athens and Beijing, two Commonwealth Games, the World Cup in South Africa, etc.

The Sydney-based snapper has won numerous awards, including the prestigious World Press Photo. This photograph, taken at Bondi Beach, won a third prize in the World Press Photos for Sports Action stories. Steve kindly gave Crikey permission to use it — for those who can’t hit the waves themselves as the weather warms up. Steve tells me it was taken from a helicopter during the Sydney City to Surf fun run. 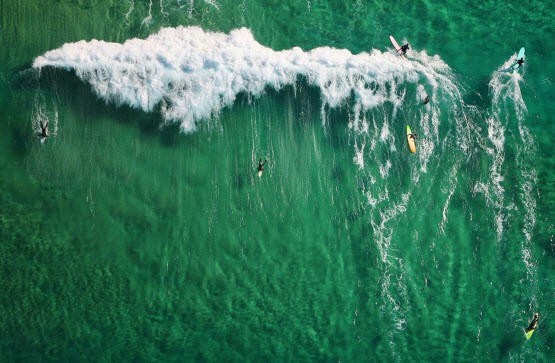 Who remembers The Sunnyboys? Australian musician Peter Oxley is not just the bass guitarist for legendary Australian band The Sunnyboys (for those Gen Y staffers in the Crikey office, this is a surf punk band that rolled out tunes like Alone With You and Show Me Some Discipline). He’s also an accomplished cook and restaurateur, owning the Wedgetail Woodfire Pizzeria in Sydney’s Newtown.

In between starring in the recent documentary The Sunnyboy, about his brother Jeremy, and getting ready for the band’s 2014 tour, Oxley has managed to write a cookbook. Teenage Kitchen Rampage contains 45 recipes aimed at getting novice cooks into the kitchen.

The band will tour Australia next year, 30 years after it broke up at the height of its fame. Jeremy, the lead singer, was later diagnosed with schizophrenia and has spent years battling mental health issues. Now mentally stable and married, Jeremy has returned to music, and the band is back together. A new compilation of their music, Our Best Of, is due out Friday 6 December.

* Margot Saville is Crikey’s Sydney reporter. She will write occasional columns on gossip and happenings from around the world, as they tickle her fancy

Margot – sadly, Wedgetail is closed. Damn fine pizzas they were too

Thanks for letting me know, John. Glad to hear that his cooking is as good as his bass playing!