Crikey has obtained an email from ABC chief Mark Scott explaining how ABC journalists' salaries ended up in print.

How the ABC salaries got leaked. ABC chief Mark Scott has written an email to staff (obtained by Crikey) detailing exactly how those ABC salaries wound up in News Corp papers. The salary details were accidentally released to South Australian Family First MP Robert Brokenshire who had requested different information through Freedom of Information. Salary details were embedded in an otherwise innocuous spreadsheet.

“My concern for staff was that the ABC had not kept confidential, important private information. We were concerned about a deliberate leak or computer hacking and asked for an expedited investigation from our Group Audit team.

“Their investigation has shown that the material was inadvertently sent to the office of a South Australian Member of Parliament in October last year in response to a request under the Freedom of Information Act.

“The request was for simple summary information regarding staff numbers in certain regional areas and at Ultimo from 2007 to 2012. The payroll detail was accessed through material embedded underneath a simple one-page spreadsheet showing the relevant staffing numbers.  The hidden detail included confidential information for all ABC staff for the last pay cycle for the six financial years from 2006/07 to 2011/12:  annual salary/pay, date of birth, and name (only) of the relevant superannuation fund.  No details such as bank account information or tax file numbers were included.”

Freedom (of information) fight. Journalist Glenn Greenwald, who broke whistleblower Edward Snowden’s revelations about the extent of NSA surveillance, has been involved in a Twitter spat with WikiLeaks and privacy advocates over privacy for whistleblowers and whether information should be redacted. Greenwald says Snowden agreed to delay the release of certain material, but online privacy advocates say that is the same as redacting information, which they are against. 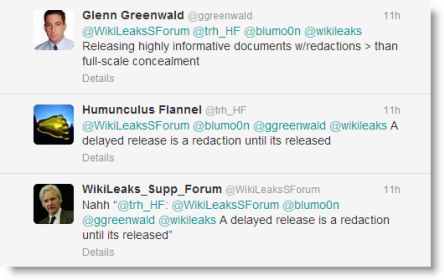 Front page of the day.  Israel is very nervous about Iran’s plans to become a nuclear state (as perhaps it should be, given former Iranian president Mahmoud Ahmadinejad’s vow to “wipe Israel off the map” …) 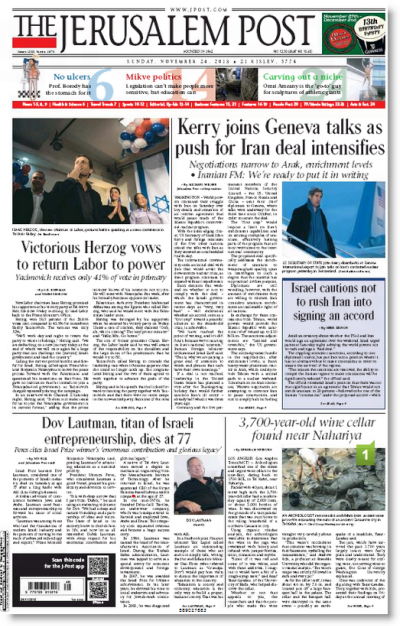 Immediate termination rather than suspension would’ve been more appropriate. A staff member who blatantly defies a clear instruction on a confidential matter can never be trusted regardless of however admirable their past performance may have been.

Re: Jerusalem Post comment. Shame on you Crikey for repeating that hoary canard attributed to Ahmadinejad about “wiping Israel off the map”. Even elementary fact checking would have exposed that for the Israeli disinformation that it is. Google Juan Cole’s Informed Comment blog for an authoratative rebuttal.

And what are those “plans” that Iran has to “become a nuclear state”? All 16 US intelligence agencies rebutted that one twice in recent years. The nuclear development program Iran is pursuing is entirely within what it is permitted to do as a signatory to the Non-Proliferation Treaty. Something, which you might have pointed out, Israel has not signed up to.

The real agenda here is that Israel wants to remain the region’s sole nuclear armed power, but apparently one is not supposed to talk about that. Just as there is a conspicuous silence on the recent decision by the Australian government to go back to the Howard era voting by abstaining on UN motions condemning the continued settlements by Israel on Palestinian land.

One expects better of Crikey.

+1 to j oneill’s comment. Which Crikey intern is so ignorant of Middle East politics that they repeated this threadbare line? Crikey interns are usually not so wet-behind-the-ears. Googling Juan Cole’s blog should open their eyes to the wilful mistranslation that’s surrounded this statement.

Wot JoN,Paddy & Xtra said – that is the sort of pathetic parrotting which makes subscribers regret their hard earned being wasted.
No probs about the rest of the ME being held to ransom by Israel’s nukes?