The world media is waking up to Magnus Carlsen, the chess prodigy and model who has just won the World Championship. But Australian chess grandmaster Ian Rogers says they still can't figure out what to write about the sport itself. 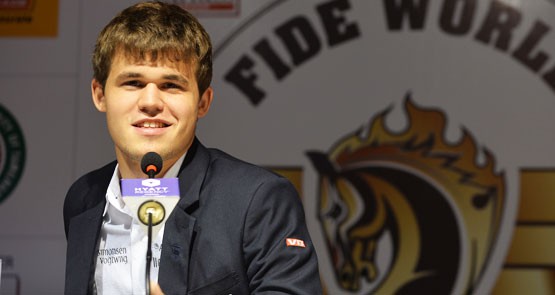 When 22-year-old Magnus Carlsen and his manager, Espen Agdestein, were thrown into the pool at the Hyatt in Chennai the evening after Carlsen defeated reigning chess champion Viswanathan Anand to take the World Chess Championship title, they discovered that their mobile phones were not waterproof.

Agdestein was relieved to no longer be tied to his phone — though he feared missing a call from Norwegian King Harald — while Carlsen’s wet Galaxy S4 left calls from CNN and The New York Times unanswered.

It was only then that news services around the Western world tried to make up lost ground and write something about the Norwegian chess prodigy who had just taken down a five-time wold champion. Before Carlsen’s victory the Western media — Norway excepted — largely ignored the world title match in Chennai.

The Sydney Morning Herald, which has not covered a world chess championship match on a regular basis for the first time since 1969, managed a creative effort mid-match from a writer who had definitely never seen a serious chess tournament and who told her audience that, in Chennai, “daring moves are rewarded with gasps and rousing applause”. (If only …)

However, this was nothing compared to the BBC’S hilariously error-prone post-match reports featuring the awesome hybrid grandmaster “Anatoly Kasparov” and using a player ranked outside Britain’s top thousand for expert comments.

In Norway, however, as Carlsen moved towards the world title everyone became a chess expert.

Over the previous fortnight Norwegian viewers had become used to the country’s famous cross-country skiers being relegated to the corner of the screen while Carlsen’s latest game against Anand was broadcast. Towards the end of the match Carlsen was front page news of almost every newspaper, and television ratings had 20% of the Norwegian population watching the critical final games.

On the final day of the match six of the top 10 trending Twitter topics in Norway were related to chess, with Prime Minister Erna Solberg tweeting support as the match moved in Carlsen’s favour (and Skyping Carlsen as soon as the last game finished).

The cause of all the fuss was Carlsen, a World Champion unlike any other, a player who models for the clothing company G-Star Raw in his spare time, plays and follows multiple other sports and answers questions in press conferences with terms such as “yadda, yadda, yadda”. (Summarising a boring draw, Carlsen said: “I played the most solid line … yadda yadda yadda … we went to the doping control.”)

Yes, Carlsen is the first Generation Y World Champion, one who, if world rankings are any guide, may be better than anyone in history, having broken Garry Kasparov’s rating record this year.

Certainly Anand, the 43-year-old defending champion, was no match for the youngster. The 12-game contest finished two games early, with Anand failing to win a single game against Carlsen.

In India the fortnight was doubling depressing, with the match coinciding with cricket great Sachin Tendulkar’s final two tests.

Newspaper coverage in India of the demise of the two icons was, not unexpectedly, extensive. Six hours per day of cricket in India is nothing unusual, but up to six hours of chess was unheard of. Television coverage of the title match dominated the programming, with every game covered live with commentary on the usually low-rating government station DD Sports, which had the biggest hit on its hands since its broadcast of the 2012 London Olympics.

After the match Anand apologised for disappointing his many fans, but most accepted that the man who first captured the world match title in 2008 had finally run out of steam after three successful title defences — more than many of the great World Champions in history.

However, while Anand was never a big celebrity outside India, his replacement seems set to become a worldwide media darling (eyebrows were raised when he featured on Time’s 100 Most Influential People of 2013, let alone when he was named among Cosmopolitan’s Sexiest Men of 2013). As a consequence Carlsen seems to be regularly fielding questions about whether he has a girlfriend, whether he would require that a girlfriend be able to play chess and whether he still has fellow G-Star Raw model Liv Tyler’s phone number. (The answers are no, no, and obviously not given the state of Carlsen’s mobile phone.)

For chess fans what matters is that Carlsen crushed Anand 6.5-3.5 with a brand of chess rarely seen at top level. The 22-year-old is now the 16th World Champion since the title was first bestowed in 1886, and the second youngest. He has been world number one almost continuously for more than three years and has won so many tournaments that he is far ahead of the world number two, Levon Aronian.

However, Carlsen does not look like he wants to follow in Kasparov’s footsteps and dominate the chess world for decades. It is possible that, lacking a suitable challenger, Carlsen will turn to other pursuits. He has already declined one film role, in the latest Star Trek movie, but Hollywood awaits. Expect to see Carlsen’s face on new G-Star Raw advertisements in 2014 and news, real or imagined, in the social pages about his romantic interests. Sports stars are supposed to be personalities, but rarely has there been one where the mainstream media cares so much about the person and so little about the sport.

“…thrown into the pool at the Hyatt…”

It appears that not even supposedly intelligent chess fans can be prevented from behaving stupidly when celebrating. At least in Chennai they didn’t spray Champagne and make complete pillocks of themselves.

“with a brand of chess rarely seen at top level.”