Gina Rinehart is putting her clout behind the small business cause SmartCompany journalist Yolanda Redrup. 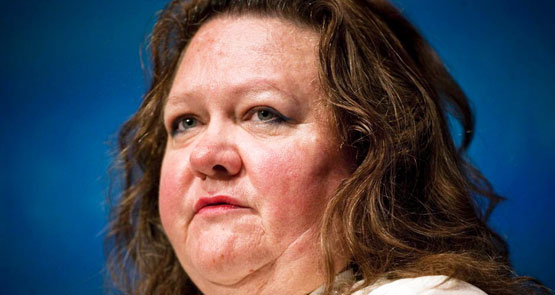 There’s a new small business group in town, spruiking none other than Australia’s richest person at its helm.

The Small Business Association of Australia wants to change the way policy makers think about small business, aiming primarily to reduce the numbers of small business insolvencies. Billionaire mining magnate Gina Rinehart, a patron of the SBAA, spoke at the group’s inaugural annual dinner in Queensland on Friday evening and suggested teenagers should learn about the free-market through Milton Freidman and Ayn Rand.

It’s not the first time Rinehart has labelled herself a small businesswoman, as this time last year she assured small businesses she was one of them during her book tour of Australia.

Founder of the SBAA, Anne Nalder, says Rinehart, while coming from a privileged background, took on Hancock Prospecting from her late father when the business was almost bankrupt.

“She had to set about building the business and it was a real struggle,” Nalder said. “The billions she has now, she made them, it didn’t just come on a silver platter,” Nalder says.

“Her roots were in a mini-micro business, she started from humble conditions, and Hancock Prospecting is now worth a fortune. But she never forgets her roots.”

On the SBAA’s website, Rinehart is referred to as the “champion of small business”.

Rinehart is now encouraging parents to buy their children books for Christmas which would foster the next generation of entrepreneurs.

“This Christmas, you can help nurture a new beginning in the direction of our nation,” she said.

“We need to inspire a new generation of entrepreneurs and risk-takers and we need to empower them with some of the most important educational lessons they will receive…Good books fuel ideas and inspiration, creativity and passion, common sense.”

But if an SBAA policy recommendation is adopted, not everyone is going to be able to start their own business.

“While we advocate for less compliance and less regulation, we’d like to see a licence for business owners,” Nalder said.

“Being a small business is more complicated and risky now, and as it is at the moment what happens is all you have to do is have an idea and register an ABN and then that’s the end of the story. If something goes wrong, no one wants to know and compliance issues can be criminal now.”

Nalder says the added compliance complexities have resulted in many small businesses unintentionally falling foul of the law, with the consequent penalties resulting in their inability to recover.

“It is obvious some people don’t have a clue and the penalties can ruin them. While we want reduced regulation and compliance burdens, we propose if you want to be a business owner for the first time you have to pass a test, like you would for a drivers licence. Why is it so easy to start a business when there is the possibility for it to ruin you if things go belly up? It’s too serious an issue to ignore.”

In her speech, Rinehart also called for lower taxes, less regulation and for government policies to better reflect the needs of business owners.

“The over government, the over regulation, if allowed to progress as it has in recent years will create uncertainty, misery and lower our standards of living,” she said.

“It seems too few who represent us in the various parliaments have bothered to heed the messages. Small business was used as a department not to assist small business, but more so it seems as a place unwanted ministers with little or less business experience, could exit from.”

The SBAA, now in its fourth year, does not consider itself to be a similar body to the Council of Small Businesses of Australia. Instead it is positioning itself as a think tank where anyone (be they from big business, small business, or government) who cares about small business can be members.

It’s calling on the government to simplify small business taxes such as the fringe benefits tax and the payroll tax, establish a charter to reduce the impact of monopolies and conduct more research into the impact of new costs, taxes and regulation on small to medium enterprises.

I nearly threw up when I saw an ad on TV for a program that was supposedly going to tell the story of the great rise of Ms Rhinehart as a businesswoman.

And here I was, deluded clearly, thinking that her great skill in life was in threatening legal action against anyone who stood in between her and someone else’s dollar.

How wrong could I have been?

And Licensing for a small business! Blimey charlie, licensing and reducing red tape. I really do need a lesson, they seem mutually exclusive ideals to me.

And the worst thing that could happen to small business is to require a license for the really small businesses, the hobbyists who turn a buck on the back of their enthusiasm for a subject.

Once you start employing people you really do have to realise you have stepped into a completely different dimension.

In the interest of accuracy Ms Rinehart should not label herself “a small businesswoman”.

Is it April already?

Michael of the family Bond

Alan Greenspan’s philosophy for managing the Fed Reserve was based upon Ayn Rand’s ‘Atlas Shrugged’ philosophy.
See http://en.wikipedia.org/wiki/Alan_Greenspan (Scroll down to heading “Objectivism”.)
Greenspan apologized for the disaster he created. Now US devt has gone from $10 Trillion to over $17 Trillion in the last 5 years and is rising exponentially.
Gina R must think she is clever because she read a book. Only a complete idiot would endorse Ayn Rand, considering that Greenspan said it was her philosophy that got the world into the present terminal mess it is.