The 19th-biggest carbon polluter in history says although it supported a carbon price, it was never on board with Labor's. Although it's committed to reducing climate change, it doesn't believe in renewables. 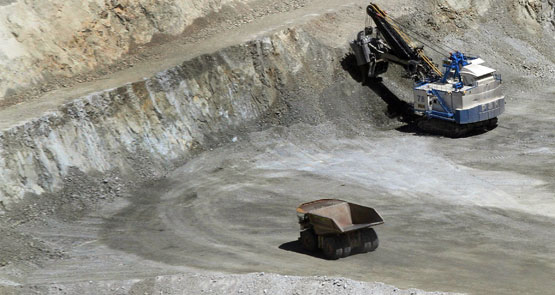 It is almost refreshing to see the layers of spin peel away as our biggest mining and energy companies line up to support repeal of Australia’s carbon price.

No position is more important than that of our biggest miner, BHP Billiton, which is the 19th-biggest carbon polluter in history according to an analysis published last week in The Guardian, alone responsible for 0.52% of accumulated man-made greenhouse gas emissions.

Former BHP chief Marius Kloppers put a rocket under Australia’s climate debate when he supported carbon pricing in a landmark speech in late 2010, and the company still pretends to leadership on sustainability — indeed, it is today giving this presentation in Melbourne.

The presentation reiterates that BHP Billiton accepts the mainstream science of climate change and supports action to reduce greenhouse gas emissions, including “the need for a clear price signal”.

The company’s line, faithfully reflected in this piece by the AFR’s Matthew Stevens, is that while Kloppers supported carbon pricing in 2010, he never supported Labor’s carbon tax. According to the company, it is therefore perfectly consistent for BHP to now support the carbon tax’s repeal, although Stevens noted in passing some might see it as “something of a backflip”.

BHP chairman Jac Nasser tried to hammer this confusing message home at the marathon four-hour annual meeting in Perth last week, which was dominated by climate change with question after question homing in on BHP’s investment in fossil fuels and growing recognition of the problem of “unburnable carbon” — valuable reserves of coal, oil and gas that will simply have to be left in the ground if the planet is to limit warming to two degrees above pre-industrial levels, seen as the threshold for dangerous climate change.

Nasser declined to identify a figure on BHP’s potential unburnable carbon liability, arguing it was not so simple. But BHP knew all about climate change, he implied, had been factoring a carbon price into all its decisions for years, had beat its own targets for reducing emissions and had a portfolio of assets that was “robust under extreme climate change scenarios”.

“You’re not telling us anything we don’t know,” he told a climate campaigner at the meeting. One slide showed BHP had diverse energy options, including coal, oil and gas and nuclear. There were no renewables mentioned — in fact, Nasser seemed not to know what renewable energy was, challenging one questioner on why he didn’t count nuclear as renewable.

Nasser wanted to have it both ways, claiming leadership on climate while declaring BHP would support the repeal of Australia’s carbon price and would work with the government on Direct Action.

“We’re frustrated that BHP is one of the few companies that’s had the courage and the foresight to be on the front foot on tackling climate change,” he said. “We agree with the science, we agree global emissions need to drop, and we have had a climate change charter that we’ve been reporting to shareholders for over a decade.”

That is just not tenable, as was finally made clear in the last hour of the meeting when safe climate campaigner and board candidate Ian Dunlop got to his feet.

Dunlop’s tilt at the BHP board  has received plenty of coverage since the meeting notice came out months ago, making clear his candidacy was opposed by the company. He did not make it onto the board, with under 4% of shareholders supporting his candidacy.

When Dunlop finally spoke on Thursday, it was to underline the fact that for all the chairman’s fine words it was the necessary sense of urgency that was missing:

“It is clear from experience over the last 20 years that governments are never going to show real leadership on climate change … It is now essential that business, in its own self-interest, take the initiative, and lead. But by going along with the corporate herd a few days ago and supporting the repeal of carbon pricing … the company has just thrown away a unique opportunity, firstly to demonstrate the leadership to which it makes such a strong claim, secondly to cut through the current political implosion of climate change policy and thirdly to trigger the radical reforms that are really required”.

Dunlop, a former Shell executive and chief of the Australian Coal Association, has been saying the same thing for years — he contributed a forward to the landmark book Climate Code Red in 2008 and has been agitating publicly ever since.

Rio Tinto’s chairman Jan du Plessis was quick to back BHP’s position, supporting Direct Action on Friday, and the submissions to the carbon tax repeal legislation reinforce the theme.

The world’s biggest diversified miner can not be allowed to walk away from support for carbon pricing in Australia so easily. It is understandable that companies want to work with the government of the day. But they cannot also credibly claim leadership on climate.

A lot of people do count nuclear as “renewable”. Crikey journalists in particular routinely refer to “renewables” as the antonym to “carbon-based fuels”.

The older sense – where people believed that the world was going to run out of oil, gas, coal and uranium etc by the year 2000 – has been emphatically proved by our mining boom to be ignorant nonsense. We are not running out of fossil fuels.

Face it, what we are running out of is room in the greenhouse for emissions from carbon-based fuels. We need to be focused on whatever is a non-carbon-based fuel. If that is what the word “renewables” has come to mean, then so be it. And that has just got to include nuclear.

Of course Crikey’s journalists could be cynical axe-grinders feeding bullshit to the gullible, but that doesn’t describe you or me does it?

As Generation IV reactor technology in principle allows the extension of fissionable supplies at civilisation-powering levels for near-geological timespans, Nasser’s challenge was entirely justified. Nuclear is at least as renewable as technologies like geothermal, which routinely gets a ‘renewable’ guernsey but is effectively heat mining.

With solar and wind using (per kWh generated) 15 times more concrete, 50 times more iron, copper and glass, and 90 times more aluminium than nuclear (not to mention huge quantities of rare earths used by wind in particular), rest assured BHP will be delighted to see renewable energy rolled out.

BHP’s behaivour is shortsighted and foolish. Divestment from coal is taking off in a big way and they will be caught on the back foot.
And renewable means what is says.

Obviously any serious attempt to force companies to leave vast amounts of coal/gas/etc in the ground would be disastrous to BHPB. As such, its ridiculous to expect real leadership from them on the issue.