The UN's annual climate talkfest has wrapped up, with some limited progress made towards a global deal on emissions in 2015. Tony Abbott faces a challenge in playing any kind of role in such a deal, with some countries 'venemous' towards Australia at the talks. 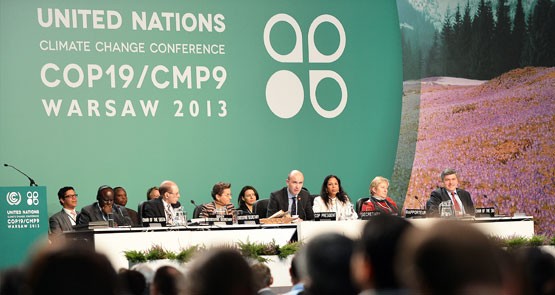 Prime Minister Tony Abbott has some homework to do. Over the next 15 months he is going to have to figure out how it is that Australia will meet its contribution to a new treaty that aims to limit global warming to 2°C.

The 19th edition of the UN’s annual climate talks closed in Poland on Saturday afternoon with typical drama and compromise. It has already been dissed as a conference that lacked ambition and resolve, but there was never any great expectations — it was only really framed as a meeting that should tie up loose ends.

More than 190 nations agreed on Saturday on a series of milestones that will hopefully take the world to a meaningful climate agreement in Paris in 2015. As part of that agreement, ministers will meet in June next year, country leaders in September, and by the first quarter of 2015, they will need to lay their emissions targets on the table.

In the end, the UNFCCC talks in Warsaw removed some of those obstacles and fudged on others — notably, the word “commitment” was diluted to “contribution,” and the milestones were not as clear as some would want. There was an air of mistrust at these talks — even worse than at the 2012 UNFCCC Doha summit — that was exacerbated by the backtracking and unhelpful rhetoric of Australia, Japan and Canada.

But the conference did deliver on a few key points. The REDD+ mechanism to protect forests was delivered — in quite spectacular style as it turned out, when Papua New Guinea, the only country arguing for weak regulation, found itself talking to an empty room when all other negotiators walked out. There was progress too on MRV — the mechanism that will validate emissions reductions. These are good signs.

“On the international stage, in the climate change arena, Australia’s reputation has been shattered.”

And so, too, was the US intervention to short-circuit Australia’s efforts to stop a new institution being created to manage the issue of “loss and damage” (the mechanism that will look at compensation to countries badly affected by climate change. Although, contrary to what The Australian wrote on the weekend, there is no $100 billion budget, or requirement for Australia to pay $3 billion a year. If that is why Abbott’s staff oppose it so bitterly, then they should broaden their reading).

And, despite Australia’s efforts once again, there was even progress on the Green Climate Fund, which is a $100 billion institution (which Abbott unhelpfully labels the “Bob Brown Bank”). Again, that progress appears to have been facilitated by the US. You can start to see where the Obama government is heading on this. It’s not the same direction as Australia.

For Abbott, it will be quite a challenge for Australia to play its part in a global agreement on climate change. Firstly, Australia, as one of the wealthiest nations in the world, and the biggest emitter per capita of any industrialised nation, will be expected to pull its weight. After all, it has been encapsulated in our own bipartisan policy.

But over the next six months, Abbott intends to trash the very mechanisms that could deliver this increased ambition to reduce emissions: the carbon price, the renewable energy target and the Clean Energy Finance Corporation — along with the independent advisory body, the Climate Change Authority, that could possibly counter the advice from his inner circle of mad ideologues to whom the words “climate change”, “green” and “clean energy” are as inflammatory as the names Fairfax and the ABC.

This is where the Abbott government needs to learn how to tread a fine line. Hopefully, Abbott is learning that there needs to be a difference in the sort of rhetoric you might indulge with Alan Jones in a radio interview, and the messaging you take to the international stage.

As Howard Bamsey, a former senior negotiator for Australia at the climate talks, and now CEO of the Korean-based Global Green Growth Institute, said during the UNFCCC meeting: “When it comes, the change will happen with a rush. If investors get the future wrong, many of their assets will be stranded. If you’re one of the leaders in your economy, you must be hedging your bets.”

On the international stage, in the climate change arena, Australia’s reputation has been shattered. RenewEconomy spoke to numerous delegations from Asia, the island states and Africa, and the attitude is venomous. European delegations are simply dumbfounded, and the real big movers — China and the US — will simply laugh Abbott out of the room if he pretends to try and broker a deal between the two.

* This piece first appeared at RenewEconomy. Giles Parkinson has been in Poland for the talks.

I note this comment – “European delegations are simply dumbfounded, and the real big movers — China and the US — will simply laugh Abbott out of the room if he pretends to try and broker a deal between the two.”

I think the word – to borrow a phrase from the end scenes of the Oliver Stone biopic of George “W” Bush – is “farce”.

Nor am I very interested in indulging false scruples mediating a way back to credibility by PM Abbott (as Paul Sheehan does today in the SMH). Rather, no false charity to the Abbott regime. When 200+ houses burn in a megafire context, when rooves are being blown off by a tornado near Guyra, when cricket ball size hail stones are falling into a river at Maroochydore – well false charity and patience expires fast.

Abbott was elected to govern for the peace welfare and good of all Australians. As he has ascended to a position equal to the level of the Peter Principle he must go. Talking around it and avoiding this hard truth – even so soon after a national election will just waste precious time we don’t really have.

And that’s even before assessing the scapegoating of refugees to cover the official support for a 200,000 per year (economic) immigration level, which really is jamming the M4.

Would someone take the Daily Telegraph’s Tim Blair aside and quietly tell him that he is totally out of step with the majrotiy of australians and somewhat of a joke himself. Here’s an excerpt from his column today:

We were a different country back then, outsourcing economic policy to babies and actually admitting it to the world. Happily, things have changed. For this year’s UN climatefest in Warsaw, Poland, Tony Abbott’s government didn’t even bother to send the environment minister, much less the Prime Minister and his pre-teen fan mail.

Instead we sent some delegates who quite properly treated the whole exercise as a lark, much to the consternation of Gaia’s little Gracies. “They wore T-shirts and gorged on snacks throughout the negotiation,” fumed Ria Voorhaar, a spokeswoman for the Climate Action Network. “That gives some indication of the manner they are behaving in.”

Back in 2009, Rudd negotiated pointlessly for 40 hours, with just an hour of sleep. This year’s Australian delegates don’t go for that sort of nonsense. “They made an intervention that late-night negotiations were bad for health and should be stopped,” Voorhaar said.

And the meetings were indeed halted, with many blaming the snack-chomping Aussies and their T-shirts. “Their behaviour caused over 130 developing nations to abandon discussions on the controversial issue of climate compensation at 4am,” whined Sophie Yeo of the activist group Responding to Climate Change. “It is one thing to be tired in a negotiation meeting, another to turn up in pyjamas,” huffed EU negotiator Paul Watkinson on Twitter. “Respect matters.” With all due respect, the EU and the UN can shove it.

“Hopefully, Abbott is learning that there needs to be a difference in the sort of rhetoric you might indulge with Alan Jones in a radio interview, and the messaging you take to the international stage.” – hahahahah! stop it, you’re killing me!

He is totally inadequate in the job as PM