RBA draws its big gun to bring down the dollar

The Reserve Bank has begun to talk about currency intervention, which would lower the dollar. But it's something of a hail Mary, since it can only be used once or twice. Is the RBA gearing up to bring out the big guns? 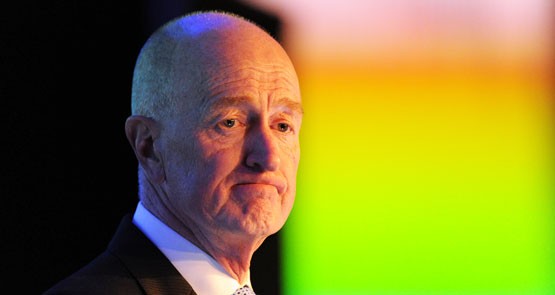 There was an immediate reaction to the unprecedented public discussion of currency intervention by Reserve Bank governor Glenn Stevens in a long-awaited speech in Sydney last night. The dollar ended up around a cent lower by early Asian trading at 92.20. That’s also down almost 2 US cents in two days. It is also the lowest its been for 10 weeks, which would qualify the move as a modest win for some rather direct jawboning.

It’s not that Stevens said the RBA would intervene — he actually ruled it out, for now — but he made it very clear that such a move remained in the central bank’s “toolkit”. Currency intervention is when the Reserve Bank buys or sells the dollar to affect the value of the currency — buying supposedly sends the dollar higher, selling it is supposed to push it lower (against the US dollar), as the RBA has trying to do for months. But central bank governors and their officials don’t speak about it, or certainly not with the frankness that Stevens did last night. Stevens told the annual dinner of the Australian Business Economists:

“Overall, in this episode so far, the bank has not been convinced that large-scale intervention clearly passed the test of effectiveness versus cost … But that doesn’t mean we will always eschew intervention. In fact we remain open-minded on the issue. It remains part of the toolkit.”

Central bankers only get one or two chances of trying to change the value of the dollar like this before the market wakes up and calls the central bank’s bluff. Just look at the way Switzerland spent hundreds of billions of francs in defending the value of its currency in 2011 and 2012 at 1.20 to the euro. It was buying so many euros that it was forced to start investing them into currencies like the Aussie dollar, which helped drive up the value of our currency and maintain it above parity for months.

For a central banker to talk about intervention to affect the value of the currency in such an open and direct way as Stevens did last night represented a significant escalation of the campaign from the central bank for a lower dollar. On at least half-a-dozen occasions in the past couple of months (most notably in the recent Statement of Monetary Policy), Stevens and other senior RBA officials have told their audiences and the markets beyond that the value of the Aussie dollar was too high for our good and for the fundamentals of the economy.

And while the dollar dipped lower on each occasion, it soon recovered that lost ground as other factors came into play — most notably for Australia, the continuing solid health of the Chinese economy, the quantitative easing campaigns of the US Federal Reserve and The Bank of Japan and our AAA stable credit rating, which continues to drag in support for the currency when it falls.

There is a lot at stake here in the valuation of the dollar — not just to help moaning businesses impacted by the continuing high dollar. A lower dollar helps the budget by lifting inflation and tax revenues over time. In an open economy like Australia, that’s a pretty quick transmission of lower dollar to higher inflation — as we saw in the September quarter CPI.

A lower dollar will also help cushion the impact of the coming slide in national income that Federal Treasury’s head forecaster Dr David Gruen talked about twice this week — at Senate estimates on Wednesday and to the Business Economists conference yesterday.

He said Australians had to to expect income growth will halve over the coming decade to the weakest pace 50 years. This will come from a combination of the weakening in the terms of trade, the accelerating pace of retirement of baby boomers and falling work force participation rates, and will impact the economy and reduce growth in national income. Getting the dollar lower will help soften the blow from that fall in income. And it will also soften the blow of the impact of the ageing of the population, outlined yesterday by the Productivity Commission.

I wonder why Glen Stevens waited until now to talk about it, after all the value of the dollar has been wrecking Australian businesses for ages. Is it something to do with the change of govt.?

My initial thought was the same as Jane’s: why now and not when the dollar was at 110c US?

Because they expected it to come down further, and sooner. Nothing at all to do with the government of the day.

The obvious way to devalue the Aussie Dollar would be to place a tax on coal and iron ore exports.