The Courier-Mail is still determined to not name English bowler Stuart Broad -- even when writing a story about him. Plus other media tidbits.

The cheque’s in The Mail. The most successful news website in the world is clearly the Mail Online, the digital presence of the Daily and Sunday Mail in London. The site is growing rapidly — revenue hit 41 million pounds (around $A72 million) in the year to September (just short of the company’s target of 45 million pounds). The site wants to grow revenue by 50%, again, this year to more than 60 million pounds (close to $100 million), and it claimed to have 12.5 million unique visitors on Wednesday of this week. It employs 460 people in the UK and the US. It is aggressive, ripping material from other papers shamelessly until caught, and more tabloid than the Mail. And it is free. DMG, which owns the Mail, Sunday Mail and Mail Online, reckons there’s a good chance that revenue growth this year for the Mail Online will be greater for the website than the fall in revenue at the two papers. The difference between the Mail Online and other media companies can be seen from the other big announcement yesterday — the proposed sacking of 700 people by the Tribune Co in the US — with most of the losses coming from the Chicago Tribune and Los Angeles Times. The cuts represent 6% of the workforce.  — Glenn Dyer

Ghost writer. The Courier-Mail  is not about to let an actual news story get in the way of a strange vendetta. Yesterday we told you of The Courier-Mail‘s one-paper campaign against English bowler Stuart Broad – or “smug pommy cheat”, as the paper calls him. The paper declared it would “simply refer to ‘a 27-year-old English medium pace bowler’, and we will de-identify any images of him”. Today it has had to make good on its promise, as Broad cut the Aussies to ribbons yesterday. Not that you’d know it from the knots The Courier-Mail has tied itself in to avoid mentioning his name: “Australia’s campaign to reclaim the greatest prize in sport — The Ashes — was dealt a cruel blow yesterday after one Englishman dominated the day’s cricket …” And who knows what’s going on in the photo … 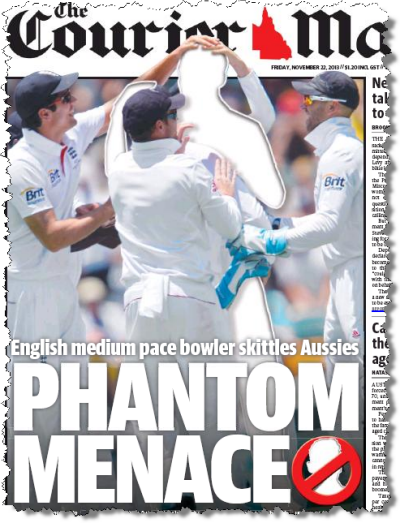 The Simpsons all in the family. The Simpsons is on cable TV in Australia (on the Murdoch-dominated Foxtel) and in other markets, but not in the US, where the long-running series has been a staple of Fox TV in the US since the late 1980s. But last week Fox TV revealed that it had sold the cable TV rights for $US700 million. The buyer is FX networks, owners of the newly developed FXX channel. FX Networks has also picked up the online streaming and video-on-demand rights to the series. And who owns FX Networks and FXX? Why, 21st Century Fox, the Murdoch master company in film, video and all things online and cable (outside Australia). The deal starts in August of next year. 21st Century Fox and Fox TV said there had been a tough bidding campaign by around five groups. FXX started in September of this year as the companion channel to FX (which isn’t doing all that well with small audience figures). What happens if the uptake of subscriptions for FXX is weak and not enough to pay for The Simpsons? A case of FXX and FX Networks paying Fox TV out of the company’s own money? — Glenn Dyer

Front page of the day. Today is the 50th anniversary of the assassination of US president John F Kennedy. This was the front page of The Washington Post 50 years ago tomorrow. 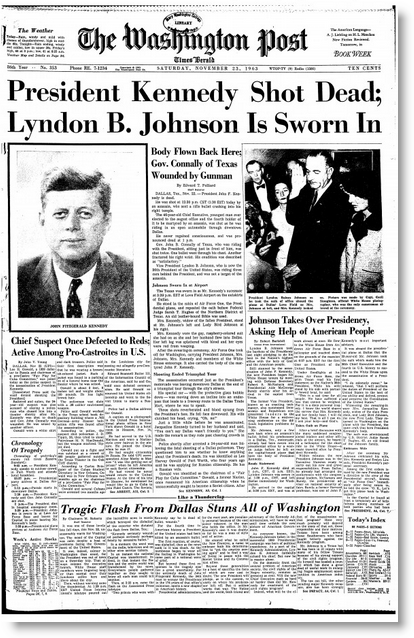 Video of the day. In honour of the news that the remaining members of Monty Python are getting the band back together, one of our favourite Monty Python sketches: 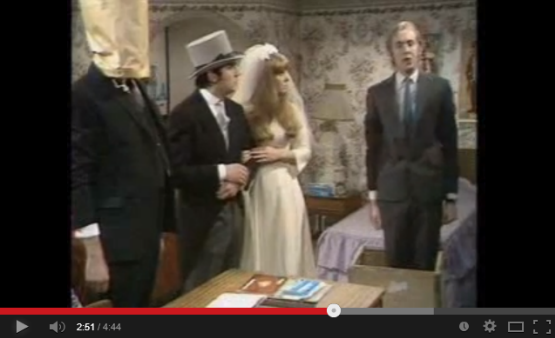 “The Courier-Mail is not about to let an actual news story get in the way of a strange vendetta.”

I’ve always taken that to be the News Corp company motto.

The Simpsons is definitely on FTA in Australia too.

The Curry or Maul’s vendetta – all because of something that happened in England …. and Murdoch’s public humiliation as it was exposed through Leveson?