Bernard Keane's parliamentary report card is in, and the parents won't be happy. Why last-minute bids to save BRW failed. There's a fresh bid to end microparty shenanigans, and we're fighting for our right to download for free. Oh, and JFK died 50 years ago -- but was he a Left hero or a Tory? 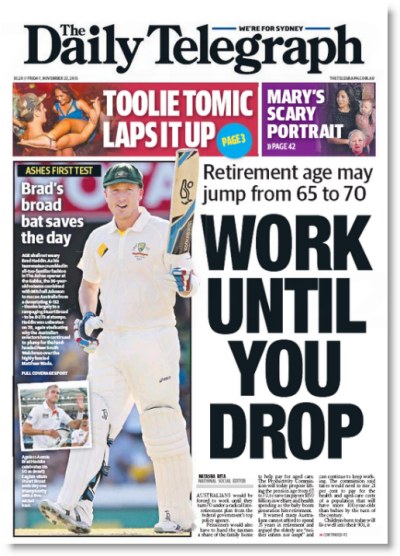 Yes, those slave-driving radicals at the Productivity Commission have today called for the retirement age to be lifted to 70 — and News Corp is up in arms on your behalf.

But before you rule out the idea, consider these findings by the comprehensive PC report:

The PC makes a compelling case for lifting the retirement age to 70 (it’s already gradually lifting from 65 to 67 by 2023. Further change would not happen overnight).

The fact that Australians are living longer — and living healthier and more active lives in older age than previous generations — is one of the great success stories of modern life. People in their 60s and 70s are no longer consigned to sitting in the easy chair, hobbled by arthritis. They are getting hip replacements, donning lycra and cycling long distances. They are watching the latest movie before their grandchildren get to. They are engaged in social movements, they are writing books, they are caravanning around the outback.

This should be celebrated by all of us. But the reality is that a pension age of 65, or 67, is a relic from a previous era. The budget cannot afford for this to continue. Policymakers should carefully consider the proposal to gradually lift the pension age to 70.

Crikey Calling is independent media for independent minds – in handy podcast form! Join the Crikey crew for a lively (if somewhat wonky) look behind the scenes of politics and power in Australia.

Join Canberra correspondent Bernard Keane and deputy editor Cathy Alexander as they talk the early days of the Abbott government. Keane’s excited to see Malcolm Turnbull at the dispatch box, but there’s not much else to write home about. Stream it or download here.

If voluntary euthanasia was made legal it would eliminate some exorbitantly costly high-care which is often not welcomed by the patients/recipients. Win win.

Crikey is making the mistake many others have fallen for. Retirement age is not the same as pension age. Governments can change pension entitlement age but we can retire at any age we like. It used to be common to have a maximum working age of 65 but that has largely gone by the board and people can work to any age as long as they are physically and mentally able and if their employer wants to keep them on. What the Productivity Commission is talking about is changing the pension age to 70.
I guess those who can’t keep working to 70 and can’t afford to retire will have to go Newstart or Disability pension so the taxpayer will still have to pay.
I am a self funded retiree aged 67, I retired in my 50s and I am not claiming any pension due to the income test for me and my wife.

“Logan’s Run” & “Soylent Green” – I can’t see the problem.
In the meantime, where are the rock & roll retirement homes for those of us who don’t want to listen to Vera Lynn or Cliff ‘Bionic Xtn’ Richard, with winsome (or buxom, depending on proclivities) attendants wheeling a full tray of nominated meds?

It’s always easy for people with rewarding, physically undemanding jobs to make these arguments. How do the aging stats break down by income and job? Journos may be having longer productive lives, do cleaners or brickies? I gather that the American numbers aren’t pretty for those at the bottom of the heap.

Then all you have to do is find a job where you won’t be sacked for being too old/superfluous to requirements?
Otherwise we’d have to live on the starvation allowance currently being used to “manage future demands”?