The UN's annual climate summit will soon wrap up, and the Australian delegation is under fire for not taking negotiations seriously, blocking progress, wearing T-shirts to officials talks, and giggling. Crikey reports from Poland. 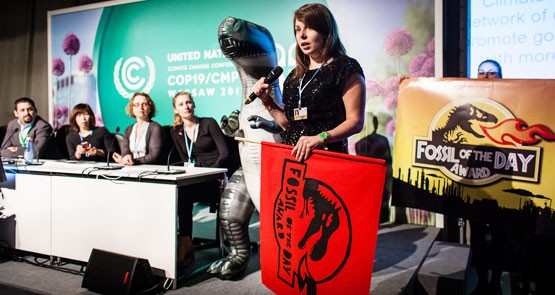 The UN’s annual two-week climate summit is due to finish on Saturday, Australian time. Giles Parkinson is in Poland for the talks.

Australia’s reputation at the climate talks hit a new low on Wednesday after an influential bloc of developing nations took offence at bad behaviour from Australian negotiators.

Our delegation was accused of blocking all avenues of agreement, placing brackets around any text that was approaching consensus and, worst of all, of wearing T-shirts, “giggling.” and of being “cavalier and insensitive”.

In an unusual move, the Abbott government has not sent a minister to the United Nations Framework Convention on Climate Change summit. It has also made it clear it does not wish to contribute to a key fund for developing nations to address climate change, is dismantling the carbon price, and appears to be walking away from a promise to consider more ambitious targets to reduce emissions by 2020.

Saleemul Huq, a scientific advisor to the 132 nations that make up the “G77 and China” negotiating bloc, said G77 negotiators had walked out of talks at 4am on Wednesday. He said:

“There was continuous blockage of anything they wanted from Australia who were putting brackets around everything. The behaviour of Australia’s negotiators was poor, they were being extremely insensitive, wearing T-shirts … This is a serious issue. We are talking about life and death, people are dying from Typhoon Haiyan, we’ve got people on hunger strike here. You don’t trivialise these issues, by giggling, and marking brackets around anything. It is just not done … the US and others have been negotiating at a technical level in good faith. It broke down last night because of the Australians.”

In the institutionalised chaos of international climate talks, grandstanding is commonplace. But in this fishbowl world of  the UN-sponsored talks in Warsaw’s National Stadium, Australia has become the whipping boy of climate politics.

It’s not in dispute that Australian negotiators were casually dressed (although there seems to be some question over whether they were wearing T-shirts or pyjamas!). But the fact that it is now used as a lightning rod shows how far Australia’s stocks have fallen. The UNFCCC “Fossil Of The Day” for biggest obstacle to a climate deal: Australia has an unbeatable lead with four gold

One EU negotiator questioned whether there was a walk-out, suggesting the meeting was breaking up anyway. But the negotiator said casual wear was not deemed appropriate.

Some observers say Australia’s poor reputation is not entirely deserved, because some developing countries are taking an equally hardline attitude, such as their refusal to be drawn into committing to their own emission reduction targets. Developed countries think this could short-circuit moves to a comprehensive UN climate deal at the 2015 Paris summit.

But they note Australia had set itself up as the fall guy because it has dumped its previously constructive approach. Prime Minister Tony Abbott’s three-word sloganeering, on the domestic stage and at the recent CHOGM meeting in Sri Lanka, and his dismantling of climate policies and institutions, has been well noted here.

Alf Wills, the lead negotiator of South Africa — one of four countries that make up the powerful BASIC group (Brazil, South Africa, India and China) — said there was disappointment at Australia going no further than its “absolutely least ambitious” emissions reduction target of 5% by 2020. Technically, Australia signed up to cut emissions by 5 to 25% by 2020, depending on what other countries do. But Abbott seems to be limiting it to the 5% cut. Wills said:

“We are mindful that the Australian government has recently changed, and has a different policy. What is disappointing for us is the comment made by the new prime minister that Australia will only do minus 5%. For us it just reinforces the concept that these numbers need to be internationally legally binding, because if governments change, can they just unilaterally change their international commitments … “

Bangladesh, which insisted that what occurred on Wednesday was a walk-out,  said the political change in Australia has completely reversed its position. “How do we try to negotiate with them?” said its head of delegation.

Alden Meyer from the Union of Concerned Scientists said Australia had previously done “a fairly good job” of co-ordinating the powerful Umbrella Group negotiating bloc. “I know Justin [Lee, the Australian delegation head] has been trying to be constructive, but for whatever reason they are in a totally different mode of behaviour here,” Meyer said.

Loss and damage is a critical issue for the G77 nations at these talks, but a sensitive one for the developed world, who fear that they will have to make payments as compensation for past emissions. They have ruled that out.

Warsaw was supposed to be about seeking agreement on the institutional arrangements for a Paris climate deal. The question of money is not on the table, but the developed and the developing world differ on how the institution should be set up.

Meyer said no developed country is in favour of compensation for loss and damage: “They are not going to go there, but that is being used as the bogeyman.”

* This story first ran on RenewEconomy

Makes you so proud to be an Aussie…if only I was Catholic too, I could be the complete insensitive, careless, yobbo package..!!

I forgot to mention Infallible…..

This is just disgusting. Abbott is destroying our reputation on the world stage, the cretin 🙁

So who did “we” send? Abbott’s Buffoons?

Australia is not even committed to the 5% target. Tony Abbott said that if ‘Direct Action’ can’t do it within planned funding (which no authority thinks it can), the costs will be capped. In any case it is clear that the Coalition has been captured by the denialist lobby and Australia is effectively withdrawing from action to mitigate climate change.