Liberal Party adviser Mark Textor has hit the headlines in Indonesia over a tasteless tweet. That and other media tidbits.

The story then reads:

Textor has since deleted the tweet which did not name Natalegawa directly.

The spying scandal continues to dominate the media in Indonesia, with the front page of yesterday’s Jakarta Post carrying a story headlined “Battle lines drawn against Oz.” The English-language paper was far from bolshie in its latest editorial, arguing:

“The cordial relations that Yudhoyono established with successive prime ministers since 2004 have facilitated and strengthened relations even further. But as with any neighbor relations, there are bound to be hiccups from time-to-time. This week is one of those downturns in the relationship. If President Yudhoyono now decides to review overall cooperation with Australia, he would do well to be selective and be sure not to affect the overall long-term relationship that he helped build.”

Tele‘s Rees reveations re-open privacy debate. Debate about how far the media should pry into politicians’ private lives has erupted again in NSW after The Daily Telegraph revealed ex-Premier Nathan Rees had an affair with a constituent. The Tele ran the scoop on its front page yesterday under the headline “Nathan Sleaze: Ex-premier admits to sex romp with constituent”. Rees resigned from shadow cabinet following the revelations.

Tele state political editor Andrew Clennell justified the story on the grounds that Rees breached his position of trust by entering into a sexual relationship with a constituent who was lobbying his office. The woman was seeking assistance from Rees because she believed police officers had failed to arrest someone who had assaulted her son. Rees wrote a letter marked “draft” to the Ombudsman and Police Integrity Commission but the paper suggests he did not sent it. Columnist Sarah Le Marquand writes today that publication was justified because there was a power imbalance between Rees and the vulnerable woman.

Not everyone agrees. Sydney Morning Herald state political editor Sean Nicholls wrote yesterday the paper was approached by the woman several months ago, claiming a non-consensual relationship. “But when pressed, the woman acknowledged the affair was consensual and that Mr Rees had done nothing wrong,” Nicholls wrote. At that point the paper abandoned the story.

The general public was also divided:

Front page of the day. The Ashes kick off in Brisbane today and The Courier-Mail isn’t holding back with today’s front page. The paper has decided to “ban” English fast bowler Stuart Broad — or “smug pommy cheat” as the paper calls him — from its pages. Broad was labelled a cheat during the last series for not walking after being caught. The Courier-Mail says it will “simply refer to ‘a 27-year-old English medium pace bowler’, and we will de-identify any images of him.” We wonder how the policy will play out if Broad nabs a hat-trick or does something else especially news-worthy. 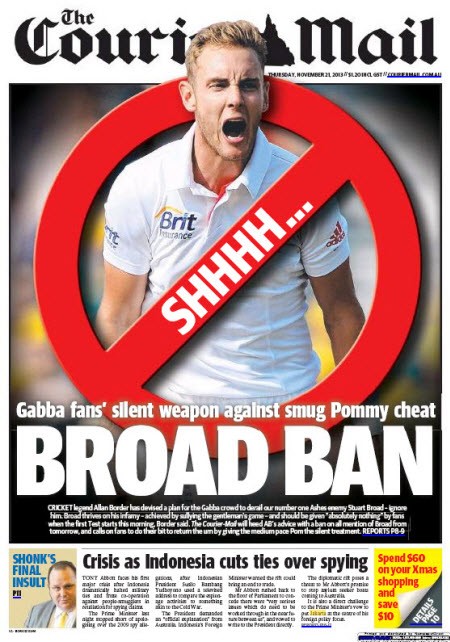 How long before Textor’s sought out again by the ABC for his expert opinion on something or other?

When are we going to get the dirt on journalists or Conservative politicians “playing away”?

As for the Curry or Maul – I didn’t know Broad and Pietersen were even Labor politicians?
As for “Gabba fans silent weapon against smug Pommy cheat”? I thought that was going to be about Brooks, or Coulson or the NotW at least?

All that’s needed is for Broad to go on a nightclub binge or drive a car at 150kms/hr and the hacks at The Courier-Mail won’t be able to resist. Murdoch likes muck.

The Rees story was total BS, and the usual ‘power-imbalance’ argument are reasonable when correctly employed, but I very much doubt this was the case.

It would be just as easy to suggest that the consituent had all the power, as a woman of wiles who seduced the politician to get what she wanted.

If it was consensual, and everyone seems to think so, then this was just grubby gutter journalism.

And from an industry that is one of the most bollocking behind the scenes cultures of any industry or profession in Australia.

Goddamn, if I had a spare billion I’d start up my own rag just to out all these pontificating journalists. You had better have a clean slate yourself if you are going to do this.

To true zut, the vitriol and the nationalism dressed up as patriotism? All because “one of his papers was caught out doing the wrong thing and he and they were treated as they were because of that profit/power-driven institutionalised antisocial behaviour, by “the Poms”?