Some say there are ongoing human rights abuses in Sri Lanka, but the government denies it. With the recent CHOGM meeting shining a light on the issue, Crikey intern Virginia Millen explains the situation and looks at both sides. 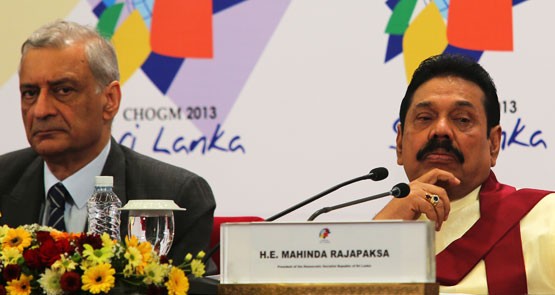 The recent Heads of Commonwealth Government meeting in Sri Lanka — boycotted by some leaders — has shone a light on allegations of ongoing human rights abuses in the country. With Sri Lanka a key source country for asylum seekers who come to Australia by boat, Crikey takes a look at the current situation there and examines claims of human rights abuses.

Why is the Sri Lankan government being criticised?

Days before travelling to Sri Lanka, British PM David Cameron tweeted the following: “@NoFireZoneMovie. Chilling documentary on Sri Lanka. Serious questions to put to @PresRajapaksa next week.” No Fire Zone is a documentary made by journalist Callum Macrae that was recently broadcast by Channel 4 in the UK. It documents the violent last months of the Sri Lankan civil war, when alleged war crimes took place.

Director of advocacy and research at the Human Rights Law Centre Emily Howie says not only has the Sri Lankan government never addressed those last bloody days, but human rights abuses are ongoing, including rape and torture by authorities.

However, Admiral Thisara Samarasinghe, the Sri Lankan High Commissioner to Australia, told Crikey for the past four years Sri Lanka has had a clean record, “with no death or destruction”.

“His Excellency [President] Mahinda Rajapaksa restored the fundamental and human rights of all citizens of Sri Lanka irrespective of ethnicity by defeating the most ruthless terrorist organisation ushering peace, safety, security and providing food, water, health and education to all people of the country, which was not the case until 2009,” he said.

What happened in the final months of the civil war?

The circumstances of the end of the civil war, which was fought for 26 years by separatist militant group the Tamil Tigers against Sri Lankan government forces for an independent Tamil state, continue to be called into question. In 2011, a report released by the UN Secretary General-appointed panel of experts found there were credible allegations of war crimes and crimes against humanity committed by the Sri Lankan government forces and the Tamil Tigers.

The panel estimates 40,000 civilians were killed in the final stages of the war when Sri Lankan government forces defeated the Tamil Tigers, but says only a proper investigation can confirm this figure.

Samarasinghe says that number is “absolutely false. Having been in the military, we never went and looked for civilians and killed,” he says. “We looked for terrorists and we destroyed them.”

After visiting the region of Jaffna, in Sri Lanka’s north, while at CHOGM, Cameron called for an independent investigation into the alleged human rights abuses. “Let me be very clear: if an investigation is not completed by March, then I will use our position on the UN Human Rights Council to work with the UN Human Rights Commission and call for a full, credible and independent international inquiry,” he said.

Have human rights abuses occurred in Sri Lanka since the war?

The Sri Lankan government denies allegations of ongoing human rights abuse, but there is mounting evidence this is still occurring. Howie says human rights groups and journalists substantiate this.

“Human Rights Watch has provided evidence of rape and torture in custody, including cases occurring this year. Amnesty International has documented the silencing of dissent in Sri Lanka, UK doctors have reported ongoing cases of torture of patients they see in the UK, and the UN High Commissioner for Human Rights, Navi Pillay has just delivered a report following her visit to Sri Lanka,” she said.

Sri Lanka’s Deputy High Commissioner toAustralia, A.L. Ratnapala, says the claims of abuse are false. “Those allegations are made because there are certain small groups of people of Tamil ethnicity who want to divide the country and create a separate state in the north.”

However, RMIT’s Paul James, professor of globalisation and cultural diversity, says while there is no documented evidence of systematic human rights abuse many Tamils are experiencing disillusion, harassment and lack of hope.

“What’s not happening is systematic direct action in relation to Tamils,” he said. “They are not being detained, disappeared or beaten up by the military. It might be happening by local militia groups, but the government is not doing it.”

Ratnapala invites anyone with concerns to “visit Sri Lanka and see for themselves”.

This may not be so easy. Earlier this month, Greens Senator Lee Rhiannon and a New Zealand MP were detained by immigration authorities while in Sri Lanka on a human rights fact-finding mission. The pair was accused of breaching their visa conditions, but this has been disputed by some lawmakers.

“I understand [Rhiannon] had gone to Sri Lanka as a tourist, not as a senator to Australia, and she tried to address a media briefing in Sri Lanka, which was a violation of her visa conditions,” Ratnapala said.

According to Ratnapala, Tamils are treated equally in Sri Lanka. Ratnapala points to the elections held for the Northern Provincial Council in September this year. “We have in our country established a Tamil chief minister elected by the people in [the north] under a very free and fair election. Before he was elected chief minister he was a judge in the Supreme Court in Sri Lanka. If there was any discrimination of Tamils he would not have become a judge in the Supreme Court.”

But the Tamils who arrive in Australia seeking asylum tell a different story. Although the civil war ended in 2009, significant numbers of Sri Lankans came to Australia by boat in 2012. Last year, 6428 Sri Lankans reached Australian waters, and according to Department of Immigration statistics 5215 were Tamils, 1027 were Sinhalese. While Sri Lankan boat arrivals have dropped this year, Howie says the suffering goes on.

Samarasinghe denies this. “The conduct of periodic democratic elections and providing opportunity for free media activities strengthen the democratic mechanism which would invariably strengthen the human rights of all citizens,” he said.

James says although the country is rebuilding, reconciliation is still some way off. “Although there’s the promise of a reconciliation process, it’s been curtailed and stays as merely rhetoric at the highest level.”

Does it matter? We gave them a couple more boats to stop news and refugees getting out.

What is most worrying is the attitude of the most incompetent new Federal Government in Australia’s history.
Nothing they have touched so far is working. The damage being done to our international standing, our credibility and our national psyche is enormous.
Check out the following article on IA and you know what I am talking about.
http://www.independentaustralia.net/politics/politics-display/tony-abbotts-torturous-patrol-boat-diplomacy,5912
I did not elect this lot. Shame on anybody who did!

Being quoted by a journalist is always uncomfortable when a half-hour discussion is reduced to a sentence. In the article, I was quoted accurately as “What’s not happening is systematic direct action in relation to Tamils.” However, in the charged context of the article the placement of the sentence makes it appear as if I am challenging the documentation of examples of abuse in Sri Lanka or that my comment supports those who say that abuse is not happening. The word ‘systematic’ in my comment is the key. I was asked whether Tamils are leaving Sri Lanka because of a government campaign of oppression and I replied ‘no …’. They are leaving because of despair and lack of hope in a post-war reconstruction period when their part in a ‘unified nation’ is profoundly qualified and continually being unsettled.

If Sri Lankan conditions are bad enough for some Tamils to claim refugee status in Australia ?
How come more than 50 percent of the Jaffna Tamils live outside (The predominantly Tamil north of the Island)_ -in Colombo and other towns in the Southern parts of the island? They have done so for over a century and during the height of the ethnic wars.

It’s disappointing that there wasn’t more coverage of the improvements in living conditions in northern Sri Lanka. Once rebel-controlled towns like Killinochchi have been transformed by the rolling out of a modern railway network and the restoration of roads and buildings. More and more locals are being recruited and trained by the police force, which aims to end it’s reliance on Tamil-speaking Sinhalese policemen in the foreseeable future. The locals’ democratic rights have been restored, and the first Northern Provincial Elections were held last September, in which the government-endorsed party was heavily defeated by a coalition of formerly Tamil Tigers-affiliated Tamil nationalists. It would have been relevant to focus on these more recent events than what happened four years ago.