Welcome to Australia in 2014, an all-Coalition country

It's likely that the Coalition will hold a near-clean sweep of state governments next year. Crikey hits the archives to ask if this will pose a problem for Tony Abbott. 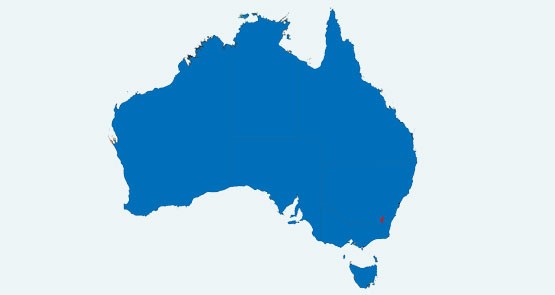 A recurring feature of Australian politics is the blame game that follows a federal government’s demise. The extraordinarily fractious government that was evicted from office on September 7 was never going to be an exception.

While there is certainly no shortage of blame to go around so far as the main protagonists of the Rudd-Gillard years are concerned, it is important to keep in mind this was a government that in some respects was sailing against the political breeze.

High on the list of factors beyond its immediate control was the stench surrounding Labor governments at state level — particularly those in New South Wales and Queensland, both of which would have done their federal counterparts a great favour if they had lost office a term sooner.

The cross-pollinating effects of federal and state politics remain a subject of considerable interest, as there is reason to suspect that aligning electoral cycles will also cause problems for the Abbott government further down the track.

This alignment has its roots in the early years of the Howard government, during which Labor completed a clean sweep of state governments even as the Coalition established a clear ascendancy federally.

When the Rudd government finally took office five years later, it found itself encumbered by the “wall-to-wall Labor governments” that the Liberals had warned against in their 2007 campaign advertising, every one of which was well past its electoral prime.

The progressive clean-out of those governments began when the Liberals came to power in Western Australia in September 2008 and looks very likely to be completed when a 15-year-old Labor government in Tasmania and a 12-year-old one in South Australia face the voters in March.

It will then be left to the Coalition to carry the can for everything that goes wrong at either level of government — except for in the ACT, where Labor and the Greens share power in the Legislative Assembly.

The extent to which a federal government is burdened by having a party of the same stripe in power at state level, and vice versa, is a rare aspect of electoral fortune that lends itself to objective inquiry.

To this end, I burrowed through three decades’ worth of election results to test the effects on two-party preferred swings of a given party’s longevity in office at both levels of government.

With respect to federal elections, this did not prove to be particularly fruitful.

Statistical tests showed no significant difference in mean statewide swings according to the party in office at state level, or any meaningful relationship between such swings and time in office either at federal or state level.

Certainly there have been circumstances where state factors have had an unmistakable impact at federal elections, Labor’s “New South Wales disease” being a case in point.

However, it appears such effects are contingent upon voters having cause to tie state and federal failures together, with Labor’s leadership revolving doors appearing to have done the trick in NSW.

With state elections, the picture that emerges is less ambiguous. This is demonstrated by the following scatterplots showing swings for or against state governments by their length of time in office, and also by the relevant party’s time in government or opposition federally (a negative number indicating the latter). 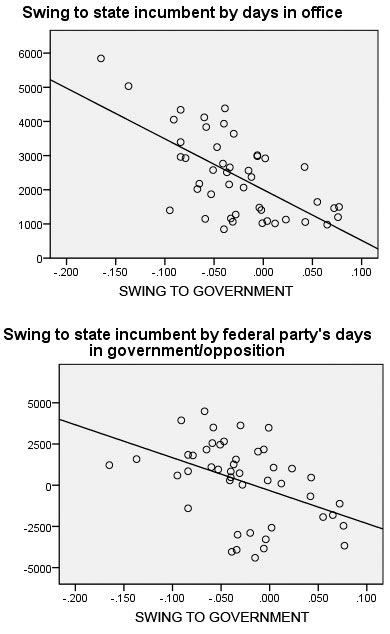 While there is inevitably considerable variability according to political circumstance, the relationships indicated by the trendlines explain 41% of the variation in the case of the state government’s time in office and 20% for the federal government.

Combining the two produces a highly significant model that predicts over half the variation in the observed swings.

According to this model, each year a state government has been in office adds 0.9% to the swing against it from a starting point of -3.4%, which can either be compounded or alleviated according to circumstance by 0.3% for each year in the life of the federal government. This doesn’t bode well for the governments in South Australia and Tasmania, which despite no longer having a federal Labor government to burden them, are primed for election-losing swings of 6.5% and 10% based purely on their own longevity.

The model also indicates that the currently ascendant conservative state governments will be playing on much stickier wickets a few years down the track, assuming the Coalition government lasts the distance federally.

The first government that is likely to be seriously challenged is the Colin Barnett Coalition government in Western Australia, which was emphatically re-elected in March with 57.3% of the two-party preferred vote.

Facing the combined challenge of eight-and-a-half years in office with, presumably, three-and-a-half years of Coalition government federally, the model implies a swing against it of over 5% when the next election is held in early 2017.

Isn’t it about time we inserted a bill of rights into the constitution. More and more people are becoming concerned at the way in which the state and federal governments are able to take close looks at our lives and how there are insufficient checks and balances to it all.
Freedom of speech would be a good place to start. Whistleblowers and journalists are having more and more impediments placed in front of them to stop them ensuring a free flow of information in our society. We are becoming enslaven to our masters as they have access to huge amounts of information and have the resources to analyse it while we, as individuals, don’t.