Joe Hockey's efforts to blame Labor for cutting the public service before he could get to it are bizarre and hypocritical. The Coalition plans to slash the public service -- so what is he whingeing about? Crikey writers Bernard Keane and Glenn Dyer report. 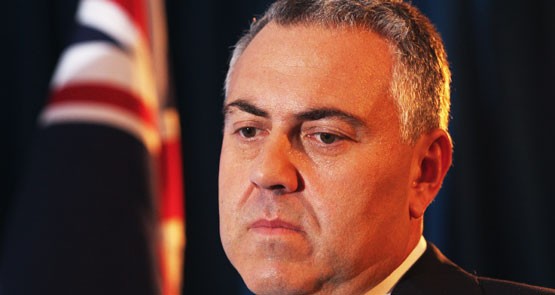 Treasurer Joe Hockey’s efforts to fit Labor up for his budget deficit blowouts are becoming sillier.

First there was the $9 billion handout to the Reserve Bank — the one that Treasury said wasn’t necessary — specifically designed to make this year’s deficit look worse and generate dividends in future years.

Now there’s the multibillion-dollar hole created by what Hockey and Finance Minister Mathias Cormann portray as a “sneaky budget surprise” by Labor: the cutting of over 14,000 public service jobs by the previous government, courtesy of efficiency dividends.

Now, you’d think this would be a pleasant surprise. After all, hasn’t the Coalition spent much of the last two years whingeing about the growth in the size of the public service? “The public service is 20,000 larger in Canberra than what it was when we were last in government,” Hockey and his leader repeatedly lamented. In reality, 10,000 of those “20,000” were in the military, but let’s not quibble — people in uniform are even more expensive than Canberra shinybums, especially if we keep sending them off to pointless wars at the behest of our imperial overlord.

So unhappy was the Coalition about this growth in the public service it promised to cut 12,000 public service jobs by natural attrition and thus save $5 billion over forward estimates.

But instead of being pleased Labor had already done his work for him, Joe is grumpy. Why? Let him explain:

“Labor only included a small provision for 800 redundancies for one of these measures in the budget — leaving agencies to find the rest of the savings without specific reforms or funded redundancies. This has forced a large number of departments and agencies to offer voluntary redundancies, for which they were not funded by the former government and which has pushed some of them into operating losses.”

If you read that carefully, you’ll see how ridiculous it is: Hockey is complaining that agencies can’t find savings because they haven’t been funded for them.

Redundancies come with a cost — the leave entitlements the departing public servant has accrued, which his or her agency must cash out, and a redundancy payment depending on the relevant workplace agreement (two or three weeks’ salary for every year of service is common). So redundancies save money over coming years but have an upfront, one-off cost. It’s that cost Hockey’s claiming is unfunded.

But Labor never told agencies to sack people, it just told them to save money and left it up to them as to how they did it. That’s in line with the modern public service axiom of “letting the managers manage”. There was no 14,000 target from Labor. Agencies have the flexibility to obtain long-run savings at short-term costs, as they can seek the approval of the Department of Finance if they need to run an operating loss because they’ll be achieving net savings in future years.

“This is all part of the rocky start by Hockey in the Treasurership.”

So Hockey’s effort to portray Labor as having “forced” agencies to run at a loss that now has to be made up by the Coalition doesn’t make any sense. And in effect he’s complaining that Labor has made savings that his future budgets will benefit from.

He also contrasts the Coalition’s approach of being “upfront” about its intention to cut 12,000 public servants with Labor’s “secret cuts”. But there was nothing secret about Labor’s efficiency dividends. They were in the budget papers and mid-year economic and fiscal outlook, on display for everyone to see.

Where Hockey is on stronger ground, however, is in pointing out that Labor maintained the fiction that its efficiency dividends needn’t lead to job cuts. To hear the former government tell it, the public service could find each additional efficiency dividend by cutting travel or reducing training, or maybe photocopying double-sided. It maintained this absurdity even as departments undertook big jobs cuts — hundreds at Health, for example, that Crikey detailed at the time. This week, we heard via Senate estimates that Customs will be cutting 600 people in the next four years. And, unfairly, the CSIRO staff unions seem to be blaming the new government for the loss of hundred of jobs this year of people whose contracts are up in 2013-14. The question is, how many of those hundreds would have kept their jobs under Labor efficiency dividends?

Hockey taunted Labor about these blatant lies in question time yesterday, and he was right to do so.

Then again, the Coalition’s 12,000 target wasn’t much better, because it maintained that that target, too, would be painless — it would all be done by “natural attrition”. The idea of a multi-year recruitment freeze was nonsensical, and interfered with the concept of letting agencies decide how most effectively to deploy resources. And what was the basis for the 12,000? Had the Coalition done a time-and-motion study of public service efficiency? Or had it plucked a number out of the air based on how much money it wanted to save?

If the government believed its own rhetoric, of course, it could simply go ahead with its own cuts on top of Labor’s — cut 26,000 rather than 12,000. That’s only 6000 more than the growth it claims occurred under Labor. But it knows that its 12,000 figure won’t be achievable by natural attrition — it will need to rely on redundancies, which will cost several hundred million on packages and leave payouts.

This is all part of the rocky start by Hockey in the Treasurership. So far, he’s given handouts to high-income earners via superannuation, attacked low-income earners via superannuation, demanded an increase of $200 billion in the debt ceiling, aped the Tea Party in promising to shut down the government if he didn’t get his way and publicly mulled the unprecedented holding off of MYEFO until January. Speaking of which, it’s now more than two weeks since the date in 2011 when Hockey angrily demanded that then-treasurer Wayne Swan release MYEFO. So far, there’s no sign of it from Hockey.

And today, he’ll will be watching estimates to see if Martin Parkinson, the outgoing head of Treasury, whom Hockey bagged and sledged for doing his job for the former Labor government, can put his Treasurership back on the rails. Hockey will be looking for Parkinson, who has been treated disgracefully by the government, to support claims about the Reserve Bank injection, the budget position (which Hockey claims has worsened since the election) and the debt ceiling.

There are a couple of other matters that might come up. The growing difficulty facing first-home buyers in the housing boom is one; the other is the way Hockey rejected the former government’s tightening of the fringe benefit tax rules around novated car leases.

This $1.5 billion denial of revenue has caused the parasitic salary packaging industry to get more confident. People who get emails from a well-known buying website yesterday received a one-off email offer of a tax cut of up to $10,000 through a car purchase via the restored salary sacrifice rules.

That’s a nice early legacy of Hockey and the Prime Minister.

It only leads to the eternal philosophical discussion – “Just how far above his competency level is Joe Hockey.”

I have heard that he used wrong numbers before. Are his figures right this time