Let there be boobs as Bonds complaints busted

The Advertising Standards Board has nipped complaints in the bud and will allow Bonds to use the word boobs in its advertising campaign for bras, writes SmartCompany editor Melinda Oliver. 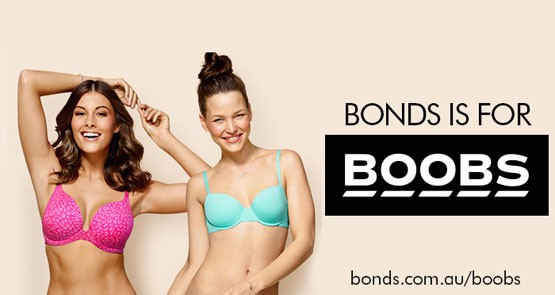 Bonds has been cleared by the Advertising Standards Bureau for its new “Boobs” advertisement, which roused at least 15 complaints after it launched in October.

The advertisement, which replaced the well-known Bonds logo with the word “Boobs” and featured images of women in bras and underwear, caused controversy for its use of the word.

The ASB board reviewed the complaints and ruled in favour of Bonds, noting the word boobs is defined as a colloquial term for women’s breasts in the Macquarie Dictionary.

The controversial campaign was designed to promote the apparel brand’s fresh offer of bras, which come in a broader range of sizes and fits. The company hired Clemenger BBDO to produce the campaign and invested in billboards, online and print advertising to promote it. At the time of launch, a spokesperson for the ASB said 15 official complaints had been made about the campaign.

The concerns were put to a board of 20 community representatives, who assessed if it breached the Australian Association of National Advertisers Code of Ethics. The spokesperson said the review would focus on the “language, the sexuality and the nudity”.

The ASB released a sample of complaints made against the ad. These included:

“I find the word ‘boobs’ to be inappropriate in the context of advertising. If the word is not appropriate for children to use during school hours and deemed offensive in that context, then I don’t understand how it is appropriate for the same word to be us used for mainstream marketing, so boldly and without any reference to the product. I find the word boobs offensive.”

“I find using the terminology of ‘boobs’ to be very demeaning when used in advertising referring to the female body parts we know as breasts. It would be like having an advertisement for men’s underpants and calling attention to them by having a billboard with the word ‘dick’ on it and then changing it to men wearing the underpants and referring to the brand and dicks. This would not be acceptable or tolerated so why is it acceptable to use such demeaning words for women’s underwear that ‘Bonds’ feels so justified in using.”

Bonds told the ASB that the campaign was designed to show that the brand was taking bras “seriously, so seriously in fact that Bonds has changed its name to ‘BOOBS’”. A Bonds statement said:

“The selection of the word ‘BOOBS’ was quite deliberate — recent research undertaken by Bonds indicates that the word ‘BOOBS’ is part of the Australian vernacular, with 74% of women using the term to describe their own breasts. The research results, coupled with anecdotal feedback from our customer-base, clearly indicate that the terminology is socially acceptable and commonly used in society.”

Bonds argued that the word did not have sexual connotations, “nor does it constitute inappropriate language”.

The company also pointed out that the advertisements had been approved by the Outdoor Media Association before going live. It said major partners including Myer, David Jones and Big W had supported the campaign.

The ASB agreed with Bonds, noting that Bonds had researched the consumer use of the word, and the board referenced the Macquarie Dictionary definition.

At the time of the campaign launch, independent brand analyst Michel Hogan said she wasn’t sure what all the fuss was about. “They’ve had Pat Rafter running around in his underwear playing tennis for years,” she said. “If Bonds had never had people in their underwear before … and all of a sudden they did, it [the fuss] could be justified if it is out of character. Because Bonds has a heritage of being provocative in a cheeky way, it is not pushing the boundaries.”

While she didn’t think it was offensive, Hogan says the use of the colloquial word boobs could get conservative consumers off side. “When organisations push too far, they risk damaging what people think of them.”

It’s just vulgar. But then, so is Bonds taking all its manufacturing offshore but still trying to sell itself as dinky-di.

Some people need to get a life, boobs is as Bonds and the Macquarie Dictionary states, in common usage.
There is a lingerie shop on Sir Donald Bradman Drive in Adelaide called “The Booby Trap” I suppose the PC brigade will have to jump on the next flight to the City of Churches and picket them.

I’m sorry but I cannot wait for Bonds to do a similar campaign using the widely accepted colloquial word for penis, anyone who didn’t laugh out loud in their office when reading this complaint is a wowser:
“I find using the terminology of ‘boobs’ to be very demeaning when used in advertising referring to the female body parts we know as breasts. It would be like having an advertisement for men’s underpants and calling attention to them by having a billboard with the word ‘dick’ on it and then changing it to men wearing the underpants and referring to the brand and dicks. This would not be acceptable or tolerated so why is it acceptable to use such demeaning words for women’s underwear that ‘Bonds’ feels so justified in using.”

I’m not complaining and pretty much agree with the ASB, but where is the line with colloquialisms? I can think of many swear words that could be described as colloquial.