Kevin Rudd announcing he was retiring from Parliament brought him numerous media mentions, but that may be the last we hear from the once, twice, Labor leader. Or is it?

Former prime minister Kevin Rudd’s final appearance on this list (announcing his retirement on a Wednesday night, clearly in an attempt to get as high as possible a score on the iSentia Crikey Index) is a big one, although he is easily beaten by the man who effectively brought him down twice, although the first time with a huge amount of help from Rudd’s own caucus colleagues. It seems unlikely that anyone can have a clear view of what history will think of Rudd at this point, with so many wounds still so fresh, although you’d have to guess distance will make it all seem far more dramatic than it needed to be.

Other than Rudd, not much movement at the top of the list, with south-east Asian relations, mainly the continuing collapse in relations with Indonesia but also aid to the Philippines after Typhoon Haiyan, causing Immigration Minister Scott Morrison and Foreign Minister Julie Bishop remain high in the list. Treasurer Joe Hockey has consolidated the number three spot, seeming to be the only government minister who has free reign to say what he wants, when he wants.

Environment Minister Greg Hunt clearly doesn’t fall into that category, not even making the top 20, his boss continuing to take all the running on that toxic ole carbon tax. Greens leader Christine Milne is starting to gain some more media traction with discussions around asylum seekers, while Communications Minister Malcolm Turnbull and Labor MP Anthony Albanese jumped into the list, largely thanks to their comments about Rudd. 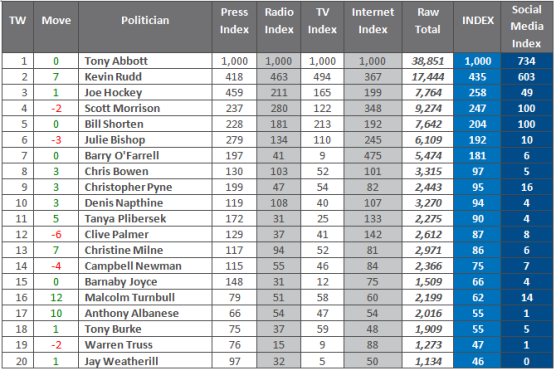 Rudd might not have gone out number one in broad media coverage, but he was easily on top in talkback discussion, and not all of it was unkind. People clearly still have very mixed feelings about whether he was awful, awfully nice, or neither of those.

Abbott continues to totally dominate political discussion on the microblogs, as usual, most of it critical.

Another week, another football coach having to deal with player “incidents”.