Sir John … just not at home. Since being awarded the prestigious Order of Merit by the Queen last year, we hear that former prime minister John Howard has been using the title “Sir”, but only when he is not in Australia. As far as we can find, the Order of Merit only allows for Howard to become John Howard OM AC SSI (for the Companion of the Order of Australia and Star of the Solom Islands awards). Have you bumped into Sir John Howard on your travels? Drop us a line.

NUW counting chickens in Melbourne. With the dust having just settled from the Geoff Lake/Clare O’Neil debacle in Hotham (in which dumped Hotham candidate Lake was smeared in News Corp papers), it seems that turf is already being staked out in Melbourne’s south-east suburbs, with the duo’s National Union of Workers faction already carving up pre-selections in the available (and not yet available) state seats, according to our tipster. Some local ALP members, presumably aligned to Bill Shorten’s right-wing Labor Unity grouping, aren’t happy with the premature moves. Know more? Send us a tip.

Stopping the whale-watching boats. Since the announcement that the Australian government would be donating two navy ships to Sri Lanka as part of the bid to stop people smuggling, some human rights activists have voiced concerns that the boats could be used to stop genuine refugees leaving Sri Lanka. But it seems the Sri Lankan navy has ships to spare, and since the end of the civil war in 2009, sections of the Sri Lankan navy and air force have turned to tourism, with one ship being used for whale-watching expeditions. The agreement between the Prime Minister and President Mahinda Rajapaksa doesn’t state how the boats must be used, and our tipster suggests that perhaps tourism could be the go. How would the PM react if his bid to stop the boats became just another part of the Sri Lankan navy’s commercial arm?

So who’s the real dalek in this pic? Turns out Parliament is home to a contingent of Whovians, after LNP MP George Christensen moved a private member’s bill yesterday, in light of Dr Who‘s 50th anniversary, to get the government to lobby the BBC to film the  2015 series here. This photo could be the only sign of bipartisanship for the week, with one Liberal, one LNP and two ALP members speaking to the motion. Perhaps the real battle is whether they prefer Tom Baker or David Tennant? Anyway, good to see these pollies have left their parliamentary tardis … 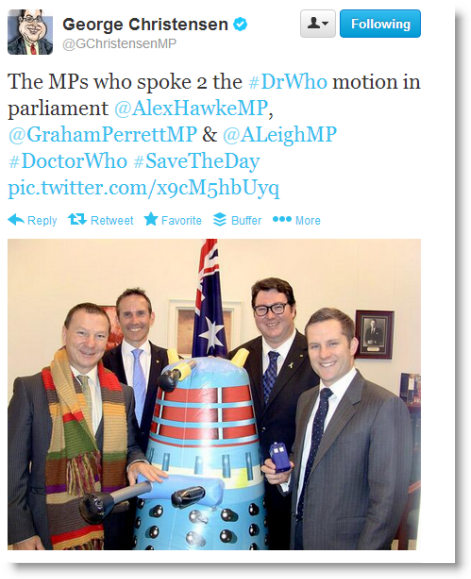 More from the photo album. We ran this photo of Bob Brown last week, and today Crikey’s Tasmanian stringer (and ex-News Limited journo) Bruce Montgomery sent through this pic of Greens leader Christine Milne that he took back in 1988. Seems like almost yesterday, not 25 years ago. Photos from the pollies’ archives are always welcome at Tips. 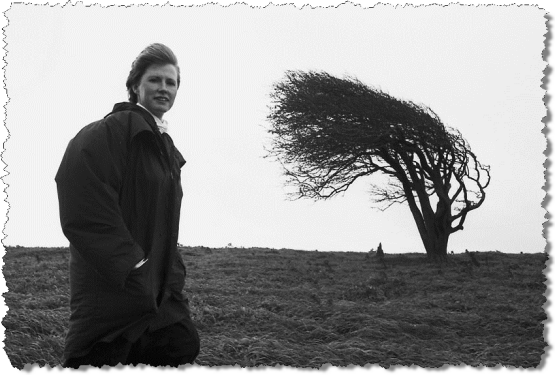 Great pic by Bruce Montgomery. Presumably the tree had grown that way cos of the prevailing winds rather than being just about to be blown away.