Spooks harm the national interest in their great Anglophone game

As the NSA has done to the United States, the ill-judged actions of Australia's spies have damaged our national interest. 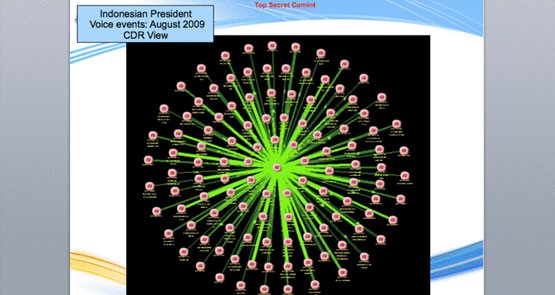 “Choose an option and apply it to a target (like Indonesian leadership).”

That’s the “way forward” for the then-Defence Signals Directorate on 3G phone interception in Cambodia, Indonesia, Malaysia, the Philippines, Singapore and Thailand, as described in the 2009 PowerPoint slides obtained by Edward Snowden at the NSA and now released for the edification of our neighbours.

For whom such anodyne “find ways to get stuff and get it” conclusions were intended isn’t clear: presumably the NSA, but who knows? This was during the Rudd years, when the then-prime minister made much of his good relationship with Indonesian President Susilo Bambang Yudhoyono.

But all the while, Rudd’s spies were trying to tap SBY’s phone, with or without Rudd’s knowledge, as the rest of the slides, rather less anodyne in content, suggest: DSD obtained the of metadata from the phones of Yudhoyono, his wife, his vice-presidents and six other senior Indonesian figures, and made an abortive attempt to listen in to a phone call from a Thai number to SBY.

Why DSD felt inclined to write all this down for a PowerPoint presentation given to another agency is anyone’s guess. One experienced national security figure professed to Crikey they were mystified as to DSD’s behaviour in sticking this information on a slide. And if it was provided to the NSA, it’s the second time after the WikiLeaks cables that poor US security has embarrassed Australia.

This is one big Anglophone game. The English speakers — the Americans, the Brits, the Canadians, the Kiwis and ourselves — are engaged in systematic spying on not merely the world’s internet and telephone users, but on the leaders of even our closest non-English speaking allies and neighbours, then sharing the results.

There’s a line being peddled by some that Edward Snowden’s revelations reflect an agenda to damage Western interests. News Corp’s resident neolithic-con Greg “George W. Bush may well be judged, ultimately, a great president” Sheridan recently claimed Snowden was a “traitor” who had “defected”, both claims being up to the usual Sheridan level of truthiness, and both being way beyond even the claims of the US government about Snowden.

In fact, Snowden’s agenda is transparent: reveal how Anglophone intelligence agencies use any surveillance technology regardless of its legality, regardless of whether it produces worthwhile intelligence and regardless of whether it serves the interests of the countries whose interests such agencies are supposed to protect. Sheridan today explained away the Indonesian response as the “atavistic resentment” of Indonesian nationalism, an astonishingly offensive statement.

Now Prime Minister Tony Abbott is left to try to pick up the pieces in a relationship already damaged by his own ham-fisted implementation of his asylum seeker policy. He can try to blame Labor, but ultimately we know it doesn’t matter what government was in office. Cooperation with Indonesia on asylum seekers now looks to be a very long way off indeed. And as for that improvement in business and investment links between the two countries that both Rudd and now Abbott have championed, well, that might be a while coming as well.

All thanks to the PowerPoint soldiers of DSD.

Tip of the Day: Spies like us. No, really, spies actually <em>like</em> us

The Abbott Government compared to the Rudd/Gillard, is a total, unmitigated disaster. Sure they were not there in 2009, but there response in 2013 is doing untold damage to our most important relationship.

As we know from history recent Coalition governments lack the skill to say ‘sorry’.

Perhaps Abbott could appease the Indonesians by giving them a couple old patrol boats …or, if that doesn’t do the trick, send flowers.

People generally, and govt agencies, are slow to learn the impacts of the world of modern technology.

But if your business is spying on other nations, surely the first lesson to learn is to commit as little as possible to paper, and if you do, make sure you own the paper and that your computer isn’t connected to the internet.

And don’t send emails you can’t defend in court.

Yes, it wasn’t Abbott’s doing, but what the hey, what goes around comes around. He deserves no luck given his willingness to slash and burn on the way to the top.

Alexander Downer reckons the ABC and Guardian should have shut up and not said anything about the spying or at least the actual details of it. And then I suppose they would not have needed to report on the withdrawal of the Indonesian ambassador. And I suppose if the Australian ambassador is kicked out of Indonesia because of his ignorant government’s arrogance, intransigence and (what was Keating’s expression?) recalcitrance, we would expect the ABC to remain mute because it might harm the government’s interests. That would be a turn-up for the books.
I think it is perfectly OK for Australia, through its PM, to publicly apologise, even grovel, to Indonesia for our clumsy spying and shonky intelligence security and to promise that we won’t do it again. It might seem like lies and fakery (otherwise known as diplomacy) but the alternative, which is what is currently extant, seems to be that Australia intends to continue doing whatever it likes and Indonesia will just have to cop it sweet. Ho hum. Let’s hope Indonesia doesn’t decide to review the live cattle trade because then the Abbott government would have armed big-hat Nationals crawling all over it. Please, anything but Barnaby Joyce on a foreign affairs high horse.