Financial news giant Bloomberg is about to cut 50 jobs from its newsroom. Plus other media snippets of the day.

More jobs to go at Bloomberg. Bloomberg is to cut around 50 jobs in its newsroom as revenues slow in its key financial information and terminals business. There were an additional 10 jobs lost in the group’s TV business last week. Bloomberg is the market leader in financial information and terminals, and Bloomberg employs 2400 people in its newsroom and media group (which includes the TV unit). All up, the privately owned company employs some 15,000 people worldwide. Its biggest rival and former market leader, Reuters, revealed last month that it would cut 3000 jobs (5% of total staff), including 140 newsroom positions. The number three  provider in financial information is News Corp’s Dow Jones, with some 2000 employees. The New York Post first reported the newsroom job losses and the US website TV Spy reported the losses in Bloomberg TV. — Glenn Dyer

Kerr grinding axe after axe in Strewth. “Supporting a column: as Keith Dunstan used to call it, is no easy feat. It demands a great curiosity, a light touch, and unwillingness to grind axes.” James Jeffrey gets it right in the Oz’s Strewth, but the same can’t be said for his locum, Christian Kerr, who, on the axe-grinding front, appears to have missed his vocation as a Bunnings manager. 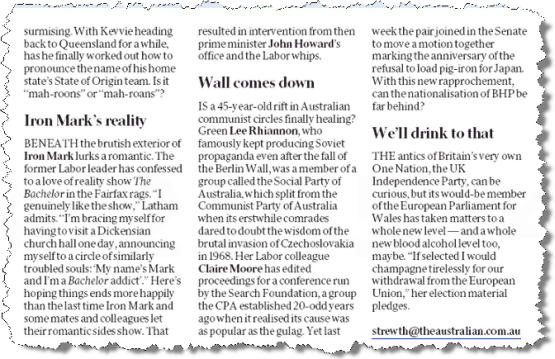 Kerr’s effort includes a slam at Teh Left (yawn) because Facebook, and Greens Senator Lee Rhiannon’s one-time membership of the Social [sic] Party of Australia — actually, it was the Socialist Party — and what must qualify as the anti-masterpiece of the columnist’s touch, in which our hero visits the Spanish Festival in Johnston Street, Fitzroy, and notes that among the prizes offered in a council-sponsored raffle was a compost bin: 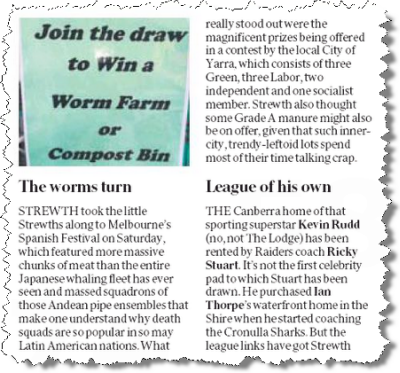 “Strewth also thought some A grade manure might also be on offer, given that such inner-city trendy-leftoid lots spend most of their time talking crap.”

That, in its way, tells you more about the bitter Right than it does about the event itself. Even when he’s at a festival where everyone is having a good time, sponsored and facilitated by the local council, all he can think is Teh Lefts, and how much he hatez them. And is defined by them. Good god, why is he on this thing? Is this the Peter Luck effect, Kerr put into make the regular guy look good? Whatever, perhaps he should be returned to his day job — tracking halvah boycotts at regional universities and other nefarious activities of Social [sic] activists — Guy Rundle

Bang Bang! Subbing slip. You might have heard, Indonesia is somewhat miffed at Australia at the moment over revelations our spies listened in on Indonesian President Susilo Bambang Yudhoyono’s phone. We don’t think relations are going to thaw out at all with this subbing error on The Sydney Morning Herald‘s mobile and online edition last night (spot the culturally dodgy typo): 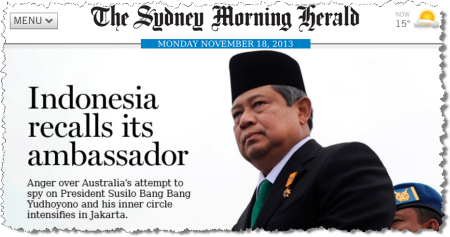 Australia’s got The X Factor. The Seven Network must be doing something right — the Australian version of The X Factor is outrating the versions in the UK (the original) and the US. Seven’s version this year recorded a solid rise in its audience, with a record audience of more than 3 million people watching the final. That’s almost as many as watch each episode of the weakening US version, and the current UK version continues to lose viewers and is being beaten by Strictly Come Dancing on the BBC (which is the progenitor of Seven’s Dancing With The Stars).

Despite the success in Australia, it is doubtful The X Factor would continue in Australia if it were canned in the UK by ITV. The program would survive its abandonment in the US, where it is on the Murdoch family’s Fox. So there were cheers at Seven at the news that the program’s originator, Simon Cowell, the production house, Fremantle, and ITV, have agreed to a new three-year contract (worth a reported figure close to 150 million pounds, or over $A240 million) for The X Factor and Britain’s Got Talent.  — Glenn Dyer

Front page of the day. New York Times journalist Luke Mogelson and photographer Joel van Houdt paid $8000 (we assume of the Times’ money) to a people smuggler to board an asylum seeker boat bound for Christmas Island. The story, photos and video of their long journey are this week’s New York Times Magazine cover story. 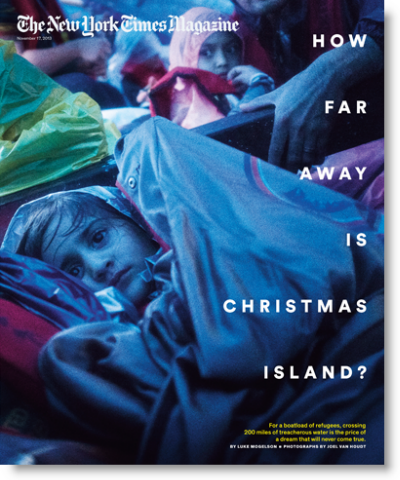 Given that the Curr was once of this parish, is it amazing, or to be expected, what kissing Mudorc’s Ring does to principles?