Mining magnate Nathan Tinkler was our youngest billionaire, and our briefest. In this extract from Crikey journalist Paddy Manning's book, out this week, we look at Tinkler's spectacular fall from grace. 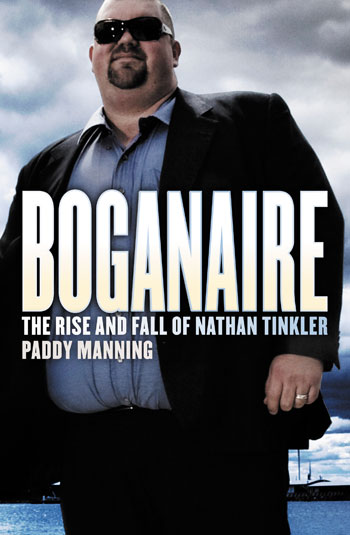 Nathan Tinkler had a stunning fall from grace. Tinkler had debuted on the BRW Rich List with $426 million in 2008, at the age of 32, and peaked at $1.1 billion at the age of 35 (although, in retrospect, there is no way this was an accurate estimate of his net wealth in September 2011). Two years later, his fortune was gone. By the time the Young Rich List calculations came around again in September 2013, BRW reckoned Tinkler’s net wealth to be below its $18 million cutoff. In the 30-year history of the list, no one had ever risen so far so fast, and then, equally surprising, fallen just as quickly. He was our youngest billionaire, and our briefest.

A former Hunter Valley mine electrician, Tinkler borrowed big in 2005, made a fortune from speculative coal plays, and at the age of just 35 burst onto the Rich List as Australia’s youngest billionaire. But Tinkler’s business model only worked in a rising market, and when coal prices slumped in 2012, he had no cash flow to service his huge debts. Within months he was trying desperately to stave off his creditors and, eventually, wound up in court.

The wind-up proceedings brought against Tinkler’s shelf company, Mulsanne Resources, in September 2012 had set in train a legal process — linear, plodding, unstoppable. If Tinkler was found to have engaged in insolvent trading, he could be held personally liable for the company’s debts, or face a ban from acting as a director of an Australian company. If fraud was established, he could go to jail.

On the Thursday morning, March 14, 2013, the Supreme Court was packed to bursting. For the next day and a half, Tinkler played nice as he was grilled by the liquidator’s barrister, Robert Newlinds SC. Softly spoken and asserting legal “privilege” before every answer to avoid incriminating himself, Tinkler could not have been more helpful — except that his whole argument was based on one-sided recollections of undocumented conversations.

Newlinds grilled him about his personal finances to determine whether he could pay any judgement against him. Tinkler declared a taxable income of just $9834 in 2010-11, mainly interest from various bank accounts. Once again, a billionaire was revealed to be paying no tax at all.

Apart from a farm in Port Macquarie worth about $700,000, no assets were in Tinkler’s name — no other real estate, no cars, no stocks or bonds. Tinkler had a couple of joint bank accounts with his wife that had roughly a quarter of a million dollars in them. That was it.

Tinkler got all his spending money by way of tax-free distributions from a unit trust controlled by his wife, Rebecca, as the unit holder and trustee. He identified it as the Tinkler Group Family Trust. Created in 2007, it had sold his shares in Macarthur Coal and had paid around $100 million in tax. But Tinkler had no idea how much money he’d taken out of the trust in 2010-11.

Newlinds: If we rounded it to the nearest million would it help?

Tinkler: Privilege. I couldn’t be sure.

In fact, Tinkler seemed not to know how any of it worked:

Newlinds: How do you get drawings out of the trust?

Newlinds: So is this what happens, your wife gives you money from time to time?

This got a laugh: Tinkler was charming the room, playing dumb. It was understandable that he might be foggy about the details, but when he was asked to describe the assets and liabilities of his wife’s trust, Tinkler departed from credibility.

On oath, Tinkler said the total amount of assets in his wife’s trust was “around $1.4 billion”. When asked what was in the trust, apart from his 19% take on Whitehaven stake — worth roughly $600 million at $3 a share — Tinkler identified Aston Metals, Hunter Ports and Hunter Rail, and his Patinack Farm stud, which he reckoned was worth “at least” $100 million after debt.

To anybody who knew these assets, the valuation was laughable. Aston Metals was worth $50 million, tops. Hunter Ports and Hunter Rail were failed infrastructure projects, all but worthless. Patinack Farm was heavily encumbered and had twice been put on the market. With Whitehaven’s shares in the toilet, there was no way the collection of assets Tinkler identified was worth anything like $1.4 billion.

With something like a hundred active and inactive companies in Australia alone, not to mention a dozen trusts that do not file accounts, and the possibility that assets could be squirrelled away in any number of offshore jurisdictions, it is impossible for a journalist to be definitive about Tinkler’s true wealth.

While Tinkler took an extremely generous approach in the witness box to the value of his assets, he vastly played down the extent of his debts, estimating the trust’s total liabilities at “around $600 million”. As would be confirmed some months later, this figure was an understatement: his major loan itself was $US634 million, not counting accumulated interest, and there were other loans as well.

In fact, while on the stand Tinkler appeared to have lost track of it all.

Newlinds: So you would suggest that the trust, controlled by your wife, has a net wealth of about $600 million?

Newlinds: …Is the position that the trust, whatever the valuations of these various assets are, is asset rich but cash poor at the moment?

Tinkler: Privilege. At the moment, so they are not yet cash flow assets.

Newlinds: Why didn’t you just go to a normal bank and ask for a loan?

Tinkler: Privilege. Normal banks do not understand my business model.

Newlinds: So that was out of the question, to go to a normal bank?

Tinkler: Privilege. It’s just out of the question for me to deal with normal banks, yes.

Tinkler: Privilege. Because I, I — they don’t understand how I create my wealth.

As Tinkler strode from court, trailed by TV cameras and a pack of reporters, the ABC reporter Conor Duffy managed to get close enough to ask a few pointed questions:

Duffy: How much financial pressure are you under, Mr Tinkler?

Duffy: Why don’t you pay your bills?

Duffy: Do you worry you could be the next Alan Bond?

At that, Tinkler just laughed.

*This is an edited extract from Boganaire: The Rise and Fall of Nathan Tinkler by Paddy Manning. Published by Black Inc., available in bookstores now. RRP $29.99

*Get a copy of Boganaire with a Crikey subscription. Renew your subscription or take out a new sub.

If he had not been greedy he’d still be obscenely rich at an obscenely young age.

Whatever happened to “due diligence” when dealing?

Is it something to do with the waistline, a’la Clive? We can but hope.

isn’t it interesting how all the big players in mining look exactly like the greedy pigs they are?