Noticed a rush in selling in agribusiness? Business types have their eyes on forecasts of hot weather and low rainfall. The early signs of drought are already in some companies' profit forecasts. 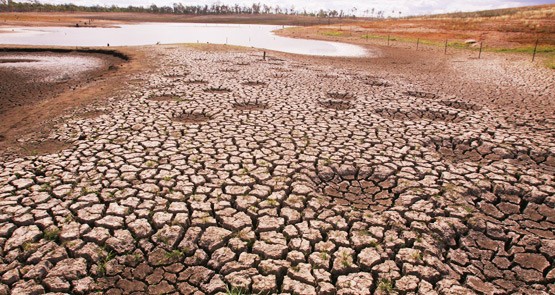 There’s a rush in selling in Australian agribusiness — and one factor driving it is fear of another prolonged drought, and memories of the last one.

The fear is exacerbated by the failure of the last wet season in northern Australia, especially Queensland, and the record temperatures seen this year.

More than 60% of Queensland is now drought-declared and the state government is predicting an increased risk of below-average rainfall and above-average temperatures this summer. Tempering the outlook, according to a late-October webinar featuring the Queensland Science Department’s Dave McRae, the El Nino Southern Oscillation appears to be in a neutral phase at least until autumn.

But there is a lot of nervousness about. The Bureau of Meteorology’s monthly drought update was sobering and the latest rainfall outlook for north-eastern Australia was much drier than earlier forecasts. And it’s spreading into NSW, with the state’s farming body warning last week that the situation and forecast was “poor to very poor” and could “deteriorate rapidly” over summer.

The signs of drought have been in the profits reported over the past two weeks by AACo, GrainCorp and Elders.

In early November AACo, still recovering from the 2011 live export cattle ban, reported a net loss after tax of some $32 million for the six months to the end of September, a result adversely affected by continuing drought conditions, with weight gain and total size down in its trading herd, and an earlier weaning and sales program in the breeding herd. AACo said “poor climatic conditions are currently the key driver of depressed domestic cattle market prices. Conditions at some properties are at ‘lowest on record’ levels”. AACo shares surged 10c afterwards, but at $1.21 they’re still low historically.

GrainCorp noted eastern Australian grain production volumes were 17% lower due to drought in Queensland and northern and central NSW, causing a 28% drop in earnings before interest, tax, depreciation and amortisation in the core storage and logistics business, which now accounts for just under half the company’s overall EBITDA.

MD Alison Watkins warned there was a lower carry-in of grain into 2013-14 from last year. Drought conditions in the north meant there was very little exportable surplus grain — feedlots are full to bursting as grazing becomes impossible — and margins would be squeezed as grain receivals were skewed to southern NSW and Victoria where the weather outlook is better, but there is also more competition among rival grains handlers.

It’s still too early to tell how good the winter crop will be as the harvest rolls through the eastern states seaboard, but the next ABARES crop forecast in a fortnight could well be a downgrade. Watkins said grain volumes received so far were “much more subdued” than last year.

GrainCorp’s shares dropped sharply after the result, falling to $11.60, significantly under the $12.20 cash component of US crop trader Archer Daniels Midland’s takeover bid. GrainCorp shareholders must be getting jumpy — if the bid is knocked back by the federal treasurer, the shares would undoubtedly plunge back to the $8.85 they were trading at when the bid was announced … or go lower, given the deteriorating outlook. Then what? It’s unlikely any other foreign buyer would emerge for another crack.

“Extreme temperatures were recorded Australia-wide in the first half-year and specifically in Eastern Australia in the second half, with the second-warmest spring and hottest summer on record. These high temperatures, coupled with below-average spring and summer rainfalls across eastern Australia, resulted in lower crop plantings, lower crop disease and pest pressure, decreased demand for agricultural herbicides, reduced feed availability for livestock and continued subdued broadacre property markets.”

Unable to find a buyer for perhaps Australia’s best-known agribusiness, Elders Ltd is still priced for oblivion with its shares at 12c.

You can see it in soft commodity markets. Cattle says a big gap opened up in August between grain prices in the north and south: Australian Prime Wheat is trading at $303 a tonne at the Port of Brisbane, where grain is scarce, but at $272 a tonne in Melbourne.  Brisbane Australian Crop Forecasters figures predict a Queensland wheat harvest of 1.2 million tonnes (down from 1.7 million last year, which was in line with the five-year average). In NSW, ACF predict a harvest of 6 million tonnes (down from 6.5 million last year, itself down from 7.6 million average over five years). But this will be offset by a bumper year in Victoria which is forecast to harvest 3.6 million tonnes (up from 2.8 million last year and 3.1 million over the last five years).

A lot of emphasis now is on the summer crop, with growers waiting for a burst of rain that will allow them to plant sorghum to keep feedlots supplied.

PAC Partners analyst Paul Jensz says while there are certainly drought conditions in northern Australia, it is more a concern for the cattle industry and companies like AACo, Elders and Ruralco, which reports today, than it is for GrainCorp, which is reverting to mean receivals after a couple of bumper seasons.

No one is calling it another millennium drought, but it’s a constant worry.

GrainCorp rival asks what all this takeover fuss is about

Common sense is cheap, which is why it has no lobby group

What, drought again. Not expected at all and Victoria spent sooo much of the (un)necessary white elephant water recycling plant. Thank goodness for that.

Has anyone told the Nationals that climate change could be a problem for farmers?

When will it dawn on soil miners (aka arid land graziers) than Bovis & Ovis are ill designed for 95% of this ancient arid continent. And that their hard hooves are making it more arid with each step, compacting the fragile soil so that moisture doesn’t permeate but evaporates.