The conservative media has wasted no time in declaring that our reputation with Indonesia is damaged, not because Australian spies have been listening in on the Indonesian President's phone, but because media outlets revealed the tapped phone. 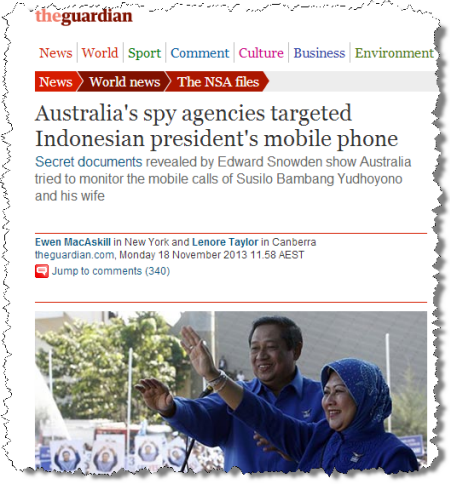 As soon as the news broke that Australian spy agencies had attempted to tap the phones of the Indonesian President and his wife, the media came in for a bollocking. According to many conservative commentators, the government and our spies were not to blame for infuriating the Indonesians but the media outlets that broke the story: The Guardian and the ABC.

The Australian‘s Chris Kenny argued the ABC and The Guardian had “breached national security for no good end”; Herald Sun columnist Rita Panahi claimed the outlets were “unnecessarily antagonising the Indonesians” and had shown a “callous disregard” for the consequences of their stories. Miranda Devine slammed leaker Edward Snowden as a “criminal fugitive” and wondered aloud why The Guardian had “sat on” the documents for months — the implication being the site timed the release of the story to inflict maximum damage on the Coalition government. Former Australian Broadcasting Authority head David Flint called for the government to review the ABC’s overseas broadcasting contract because of the timing of the release.

Expect these arguments to be fleshed out and refined on the opinion pages and airwaves over coming days.

There’s no doubt the revelations have harmed Australia’s relationship with our close neighbour. Last night Indonesia recalled its ambassador to Australia — the diplomatic equivalent of raising two middle fingers — and announced it was reviewing all co-operation with Australia, including operations to combat people smuggling.

Are the conservative commentators raising legitimate concerns — or just trying to score political points? Does the public interest in revealing how our security agencies operate override the damage to Australia’s national interest? Is this even a question the media should consider before publishing such stories?

Alan Sunderland, the ABC’s head of policy, told Crikey: “The ABC believes it is clearly a matter of significant public interest for there to be appropriate disclosure and discussion about the nature and extent of intelligence activities being undertaken by Australian authorities on behalf of the Australian people.

“Like all serious and responsible independent media organisations, the ABC always needs to balance the need to publish and broadcast in the public interest with a range of other considerations, including national security. We carefully considered that balance prior to publication and broadcast, and that included approaching both the government and the relevant national authorities for their response and their perspective. In some cases, this resulted in redactions to the information published and broadcast.

“But the ABC is also required under its editorial policies to ensure that editorial decisions are not improperly influenced by political or other sectional interests. The ABC believes it is not in the public interest to suppress or ignore important and difficult issues on the grounds that they may have repercussions,” he said.

Katharine Viner, The Guardian‘s Australian editor-in-chief and global deputy editor, said: “If you have a free press, it can never be in the public interest for a news organisation to hold back stories on the basis that they might be embarrassing or problematic to the authorities.

“The Snowden revelations have provoked an international debate about the role of surveillance in the modern state and the extent to which it should the subject of democratic and judicial oversight. The scale of unauthorised snooping by the NSA in the US and GCHQ [Government Communications Headquarters] in the UK has raised fundamental questions of trust regarding bilateral relations between allied nation states, as well as their sovereignty and autonomy. In Australia there is similarly a clear public interest for there to be debate about the kinds of intelligence activities that take place, or have taken place, in the name of the Australian people. A meaningful debate is impossible without reliable information, and a responsible news organisation has a duty to inform the debate, even if that means raising difficult questions.”

Viner argues the paper has behaved responsibly in Australia, as it has in the US and Britain. “We liaised carefully with the relevant government agencies, in order to give them the opportunity to contextualise the document and to express any concerns that were genuinely about threats to national security rather than diplomatic embarrassment,” she said.

Addressing suspicions about the story’s timing, Viner says the Snowden documents are being carefully sifted by the site’s US team and that Guardian Australia only received the relevant Australian documents in recent days. The site then approached the ABC to share expertise and resources (and, no doubt, to give the story greater exposure).

On this issue, the ABC’s Sunderland said: “The Guardian approached the ABC, and both organisations shared information and worked together to jointly report the story. There was close co-operation on the process and on the timing of the publication and broadcast, but each organisation took full responsibility and had full editorial control over the material they each published and broadcast. The ABC published and broadcast its stories within a few days of receiving the material.”

Denis Muller, an expert in media ethics at the University of Melbourne, says the Snowden files pose a “very difficult ethical issue” but that publication is defensible on the grounds that security forces may have been acting unconscionably and that there should be debate about their performance.

It’s not only Australia where the messenger has come under fire over the Snowden revelations. In June a prominent NBC television host accused Glenn Greenwald, the ex-Guardian reporter to whom Snowden initially leaked secret documents, of “aiding and abetting” the whistleblower and suggested he should be charged for a crime. Influential New York Times media columnist David Carr called on the media to show “solidarity” with Greenwald and act as a “countervailing force in favor of openness” against government restrictions on information.

Sod our “Right to know anything embarrassing during the tenure of a Conservative government”?

The damage is being done by the Government failing to do what SBY and other Indonesian leaders asked several days ago: apologise, announce a review and work more closely with Indonesian colleagues in the future.

What they do, they do in our name, our we to be blind and not responsible for what we as a notion do. So much for transparency.

My favourite quote is by US Supreme Court Associate Justice Louis Brandeis: “I have talked to you about the wickedness of people shielding wrongdoers & passing them off (or at least allowing them to pass themselves off) as honest men. … If the broad light of day could be let in upon men’s actions, it would purify them as the sun disinfects.“

In the digital age the reality is if you do it, they’re going to find out about it. Governments still don’t understand this.