China's one-child policy has been relaxed, but as China’s working-age population begins to decline, the benefits won’t be seen for some time. 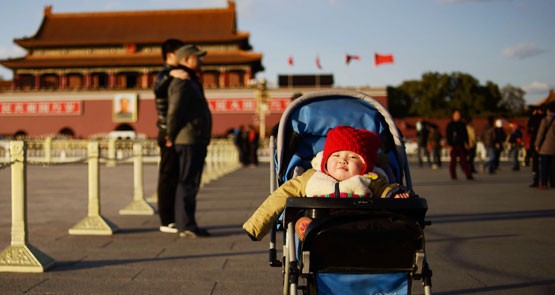 Relaxing the one-child policy will eventually boost the Chinese economy, but in the near term it does little to counter the many economic implications that the policy helped create.

Following last week’s Third Plenum meeting, the Communist Party leadership has decided to relax China’s infamous one-child policy, among other things. The policy — introduced in 1979 to curb rapid population growth — will be relaxed to allow a couple to have two children if one parent is an only child. This follows a steady unwinding of the policy in many rural areas and for families where both parents were only children.

According to Chinese authorities, China’s working-age population declined for the first time in decades in 2012 and is set to decline further, with retirees outnumbering young people entering the workforce. The self-imposed ageing of the Chinese population will be more dramatic than in other countries, including Australia. For Australia, the problem of an ageing population is characterised by a reduction in the rate of employment growth, while China faces declining employment.

The decision to relax the one-child policy will alleviate this problem to some extent,  but it will take time. Increasing fertility rates from their present level of 1.4 children per couple will take 15 to 25 years to affect the labour force. And even then, it is far from certain that fertility rates will climb sufficiently to make much difference.

The policy change will also have an effect on household spending. It will obviously be a boon for makers of infant formula, food and clothing and education services. In time it may even help the Chinese economy rebalance towards consumption rather than net exports for growth. Generally, younger people spend a higher share of their income than older people; a higher share of income in the hands of younger people will therefore boost consumption. However, much like the effects on the labour market, these benefits will not be realised for years.

China’s bizarre housing sector will also benefit, although it is still doomed to the strong likelihood of a crash. Most Chinese people 34 years old or younger are set to be the sole inheritor of their parents’ wealth. For a couple, that equates to at least two bonus houses, though if you believe the speculation surrounding Chinese foreign investment they may also inherit much of Sydney. The end result is a massive oversupply of housing and a corresponding price crash.

Perhaps most importantly, unwinding the one-child policy will begin to reduce the gender gap in China, albeit slowly. The gender ratio in China sits at six boys for every five girls, due largely to “selective abortion” resulting from the cultural preference to have a son. Gender imbalances can have a significant impact on a country’s economic performance. For example, excessive savings as families with sons compete for the few available women. A paper released last year estimated that competition for the scarce number of single women in China accounted for between 30% and 48% of the rise in real urban house prices between 2003 and 2009.

The shortage of women in China has also created opportunities for sex trafficking from other Asian countries, and rising dissatisfaction and crime originating from the low-skilled and unmarried male population. But any change will take years before it has a discernible effect on the gender gap.

Finally, the policy change will eventually help reduce the age-dependency ratio — the ratio between the elderly and the working-age population — which has increased due to the lack of young Chinese entering the workforce. In time, the one-child policy would have increasingly created couples who would have to support both sets of parents as well as their grandparents. On the other hand it will increase the youth-dependency ratio in the near term.

With the possible exception of consumption spending, relaxing the one-child policy will have little effect on the Chinese economy in the short or medium term. These changes also need to be realised, which is far from certain. What the discussion does highlight though is some of the significant headwinds that the Chinese economy faces.

The Chinese economy will continue to grow rapidly in the medium term, supporting the Australian economy. However this level of growth — or indeed any growth — will be hard to sustain further out with a declining working-age population. For a country that has come to rely on China to the extent that Australia has, this is a very worrying trend indeed.

*This article was originally published at China Spectator

Ongoing mechanisation of agriculture will continue to provide a flow of people of working age into the coastal cities for a long time yet.

It was the unique presence of brothels in Kalgoorlie that caused its relatively low rate of restlessness “and crime originating from the low skilled and unmarried male population”. Now that is to do with the availability of sex, not marriage. So it has nothing to do with the sex ratio, though it might make a few of the remaining women remarkably popular.