Anti-whaling group Sea Shepherd has been unable to secure tax-deductible status. What criteria are used to determine what charities are tax deductible and which are not? Crikey intern Virginia Millen investigates. 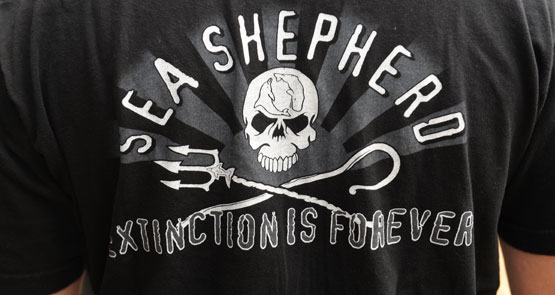 Anti-whaling group Sea Shepherd has run out of options to offer tax deductions on donations, after the High Court two weeks ago refused to hear its appeal against a Tax Office ruling.

In July this year, the majority of the full federal court upheld an earlier decision made by the Administrative Appeals Tribunal that Sea Shepherd was not entitled to be endorsed as a deductible gift recipient. The ruling found that Sea Shepherd’s main activity was campaigning against whalers, not “providing short-term direct care to animals”, making its application for tax concession under the “welfare and rights” category unsuccessful.

Sea Shepherd Australia director (and former Greens leader) Bob Brown says the not-for-profit organisation depends on donations from the public to run its campaigns, and not having DGR status has hampered fundraising efforts.

“Everybody knows that if donations are tax-deductible people give more. Not having [DGR] is frustrating and makes it harder, and we can’t understand why we’ve been denied this status,” he told Crikey.

Muddying the waters further, environmental groups like Greenpeace, which also do not provide short-term, direct care to animals, have DGR status. Both Greenpeace and the World Wildlife Fund — which also has DGR status — campaign to protect species and the environment.

Brown says the court’s decision “isn’t logical”. “The court has ruled that preventing grenade-topped harpoons smashing into the bodies of these warm-blooded mammals leading to a long and cruel death doesn’t deserve tax-deductible status. But if we were to nurse the whales back to health we could get it,” he said.

To be registered as a charity in Australia, an organisation must be a not-for-profit, have a charitable purpose and be for the public benefit.

While the ATO remains responsible for deciding which organisations are eligible for charity tax concessions, charities must now register with independent body the Australian Charities and Not-for-Profits Commission (ACNC), which was established in 2012 by the Gillard government as a “one-stop shop” for the regulation of charities in Australia.

To apply to register as a charity, organisations must provide information about the type of charity they are. There are seven category “types” a charity can register as, each of which can affect tax concession status. Once registered by the ACNC, charities can apply to the ATO for additional tax concessions and deductible gift recipient status.

There are almost 50 categories of DGR categories an organisation can apply to under the Income Tax Assessment Act 1997. Included in these categories are animal welfare and health charities. But applying for DGR status is no guarantee it will be granted, as has recently been confirmed by the ongoing Sea Shepherd case.

Charities without DGR status can continue to work as charities and can apply to the ATO to be endorsed for income tax exemption and associated concessions. But being denied the ability to offer donors tax deductions for income purposes can be costly.

“For many groups it means their capacity to attract philanthropic funding is greatly diminished,” CEO of Community Council of Australia David Crosbie told Crikey.

“If you look at many of the rules that govern the way private and public funds can distribute their fundraising it really requires that in most cases people have DGR status.”

Crosbie says many in the not-for-profit sector find the decisions made by the ATO regarding whether DGR status confusing.

In the same week Sea Shepherd lost its appeal, Greens Senator Richard Di Natale requested that the ATO and the ACNC launch an urgent review into the charity status of anti-wind farm lobby group the Waubra Foundation.

The Waubra Foundation collects donations, which are tax deductible, as a health-promotion charity.

Di Natale told Crikey he couldn’t understand why the Waubra Foundation had been granted DGR status as a health-promotion charity when many in the scientific community did not recognise wind farms as a health hazard.

Di Natale says it is “remarkable” that Sea Shepherd Australia has not been granted DGR status when the Waubra Foundation has.

“Here we have harpoons being driven into whales illegally and the group that exists to prevent that activity has its DGR status denied, while another group that apparently is there to promote people’s health but appears to be funneling donations into appeals against wind development could have its DGR status approved,” he said.

Waubra Foundation chief executive Sarah Laurie told Crikey the foundation’s DGR status was investigated by the Tax Office earlier this year after a similar complaint had been made by an unknown party.

“The ATO went through our financial documents very carefully and were satisfied,” she said.

“With respect to our choice of criteria as a ‘health-promotion charity’, we are indeed promoting the health of the community by advocating both for research into the adverse health impacts of exposure to low-frequency noise pollution. We are working with the Charities Commission to ensure that we are given the right criteria and that they are satisfied.”

The ATO provided links for further advice on this matter when contacted by Crikey.

I think Barnaby Joyce summed it up best when he said of Sea Shepherd, “Criminals should not get tax concessions – if you break the law, then donations to your organisation should not be tax deductible”.

Well researched article though, Virginia. Probably wouldn’t have hurt to mention those crimes committed by Sea Shepherd and their current legal difficulties all over the world but particularly in the USA. But still, jolly good effort.

ATO has the suck up/spit down routine weighed off. Suck up to the pro-pollution govt and their mates as they funnel dollars into an organisation that campaigns for pollution. Spit down at the anti-pollutionists.

I wonder if it’s fear that drives this – “pls don’t sack me, look I can be a dick too”

Barnaby Joyce disapproves of Sea Shepherd? That’s the motivation I needed to make a donation.

It criminals should not get tax concessions, where does that leave the catholic church?

As essentially lobbying/campaigning organisations, none of Sea Shepherd, Greenpeace or the Waubra Foundation should have DGR status.