Week in review: Coalition gets a taste of its own medicine

A "kinder, gentler polity" was nowhere in sight during the first week of Parliament under the Abbott government. 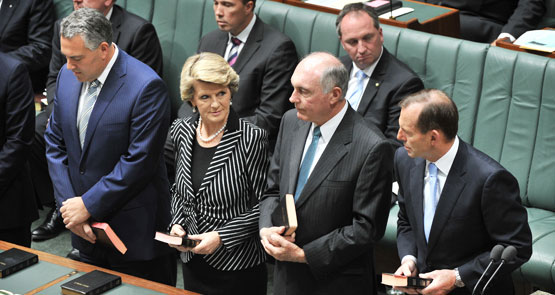 While in opposition, Tony Abbott’s Coalition repeatedly used sneaky question time tactics to block the government’s agenda. Now those very tactics are coming back to bite them in government. Abbott promised his first action in government would be introducing legislation to repeal the carbon tax, but that’s becoming increasingly difficult.

During the hung Parliament, the Coalition used question time to disrupt normal parliamentary process by repeatedly calling for a vote on the floor. This meant that the bells would be rung for four minutes, and all the members would have to return to the chamber to vote. In a Parliament where every vote counted, it was hugely important for every single member to return to the chamber, and it wasted hours of everyone’s time.

Now that Labor is in opposition, it is doing the same thing, and frustration levels are rising. Labor has obviously decided to wrong-foot them on the carbon tax strategy, and hit the government where it is vulnerable — broken election promises and lack of transparency. Nowhere is the government more exposed on these fronts than on the topic of asylum seekers. During the election, the Coalition campaigned heavily on the policy of “stopping the boats” and turning them back to Indonesia. Yesterday, opposition immigration spokesman Richard Marles (who is turning into one of Labor’s strongest performers) kept asking questions about this — how many boats were arriving, where they were, and whether they had been turned back to Indonesia.

Although parliamentarians can no longer ask supplementary questions, Marles was backed up by energetic opposition finance spokesman Tony Burke, who appealed to Speaker Bronwyn Bishop.

“If question time is to mean anything, then ministers have to be willing to answer questions here,” he said.

Immigration Minister Scott Morrison, who was refusing to answer the simplest of requests, became defensive and aggressive under pressure. Yesterday, he repeatedly said that ”on the guidance of the joint agency taskforce of Operation Sovereign Borders” he would not release the information because it could advantage people smugglers and help them ”to sell their product”.

”Commenting on operational matters would be to telegraph tactics employed by the government as to how these measures were handled,” he said.

The other big performer this week has been Treasurer Joe Hockey, who gets to answer questions on the debt ceiling by wheeling out his familiar shtick of berating the other side for economic mismanagement, to roars of encouragement behind him. In the battle of the hecklers, the government is clearly winning, mainly due to the better projection of the all-male frontbench (Foreign Minister Julie Bishop is away).  However, I did hear one of the Labor backbenchers shout at Environment Minister Greg Hunt, “What was that, Squeaky?”

Communications Minister Malcolm Turnbull also got to answer a Dorothy Dixer about the NBN by beating up the opposition over download speeds, describing the convoluted language spoken by former communications minister Stephen Conroy as “Conrovian.”  Later, as he passed Abbott, the PM said to Turnbull, “well done, mate, that was really good.”

Deputy Opposition Leader Tanya Plibersek is an effective performer during these debates; she is obviously unafraid of a stoush, and repeatedly hammered the opposition on its inconsistencies. She and Burke led the attack against the Speaker’s partisan enforcement of the rules, arguing every point.

It all ended with a long rant disguised as a question from Opposition Leader Bill Shorten about the Coalition’s “failure to lead an open and transparent government”, a tactic that should resonate with many voters, even those who don’t care about boats.

The House of Representatives sits again next week. With the government’s expenses scandal still bubbling away, and the opposition’s focus on transparency, Tony Abbott must be wondering when he can get his agenda back on track. And with one of its most destabilising forces, Kevin Rudd, now out of the building, Labor’s stocks are rising.

Can one be both defensive and aggressive at the same time? Maybe that’s what the word ‘combative’ is for.

There are a lot in MSM who would like us to forget what Abbott (aided and abetted by Murdoch’s reporting of it) put parliament through in order to get his and Murdoch’s way, that would like it to return to a genteel state – where Labor can’t win?

Just lunching on cold ironic revenge. We can last until the next change too; and without the murdocrats MSM help

And I can’t believe that these smugglers aren’t in communication anyway, without Reith-Morrison’s politicised Irritation and News Protection department’s help?
The people being kept out of Coal-ition’s Secret Squirrel Loop is us, who pay their wages?