Phone a friend. The PM’s office has confirmed that Tony Abbott wasn’t holding a $2 coin in his 7:30 interview on Wednesday night, but a Fisherman’s Friend. Maybe he’s hoping fresh breath will help him through a Leigh Sales-grilling, or is it an interesting body language technique?

Ita fires up. It was a sea of sequins, gold and tasteful-yet-glamorous hair last night in the pink-lighted Crown’s Palladium Ballroom for the 19th annual Telstra Business Women’s Awards, and a Crikey mole was chuffed to sneak in. Last year’s Business Woman of the Year, muesli queen and Carman’s founder Carolyn Creswell, spoke of balancing the work of running a successful business with the stresses of a gravely ill child. This year the top honour went to QSuper CEO Rosemary Vilgan, who talked about her commitment to ensuring workers like train drivers and nurses had enough to live on in retirement. And Young Business Woman of the Year Lieutenant Kelly Haywood, in her dress navy uniform, brought her audience to tears and then to its feet with rapturous applause with the moving story of her mother’s suicide and her honour in serving her country. 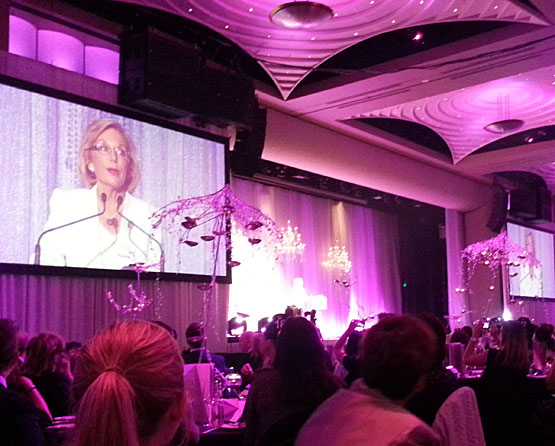 But the belle of the ball was keynote speaker Ita Buttrose, resplendent in a white sequined jacket and black pants. The Cleo founder delivered a firebrand speech about everything from Alzheimer’s to Paper Giants to female empowerment. And she couldn’t resist a dig at the merger of Cleo and Dolly by Bauer Media, the German publishing giant that owns the two. “Cleo might never be the same again,” she lamented. “What are they doing to my magazine?!”

Jessruddmentum? We’d barely processed the news that Australian politics would be without KRudd before the Twitterverse started speculating that perhaps the former first daughter Jessica Rudd would run for her father’s seat of Griffith. Imagine the material she’d get for a new book while actually walking the halls of Parliament. Rudd Junior was quick to quash the rumour on Twitter, but her words sounded eerily similar to what Rudd Senior said about then-PM Julia Gillard …

Hide and Seek. A worrying tale for any of the job-seekers out there:

“A friend told me today that she sent a job application through Seek but the employer hadn’t received it when she rang to follow up. If job-seekers are not getting their applications through to employers who are advertising, is there something wrong with they way Seek is operating? Could this explain why one sends job applications off and you hear absolutely nothing from the employer? Seek send you an acknowledgement which is automatically generated from them.”

We called Seek and they are following it up, but has this happened to you? Drop us a line, or you can stay anonymous.

From the archives. Half the mystery of this Tips photo of 90s-era Bob Brown has been solved, with tipsters telling us that the dark-haired woman on the right is Cath Moore. Moore is still an active Green, receiving 7.5% of the vote for the party in the seat of Eden-Monaro in this year’s federal election. No word on Brown’s other campaigner though, so if you recognise her (or have any other pics of pollies from days of yore) send us an email.

On his selection: minister ignored two prominent women for ABC board spots, picking female mate instead

I thought Fishermen’s Friends were for sore throats and colds, not fresh breath.