The truth will be revealed: I have seen the Tassie tiger 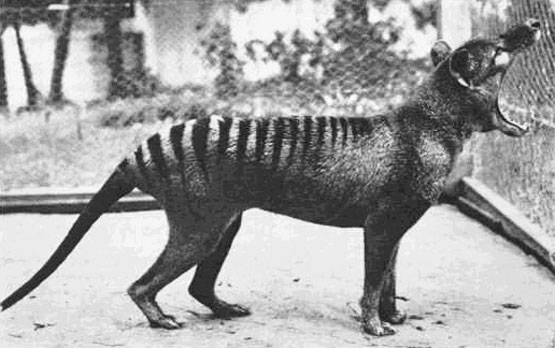 The thylacine is not extinct.

I say this without reservation. I don’t suppose the thylacine (or Tasmanian tiger) remains extant, or imagine, or even hope it is; I know categorically that the thylacine exists, because I have seen it in the flesh. I have also heard it and smelt it over the past 20 years and handled some mighty convincing eyewitness reports along the way. I have written extensively about the animal for various newspapers over the years, and my first book, Tiger Tales, was a collection of stories concerning old bushmen I interviewed, their sightings and recollections of the tiger as well as other sightings spanning the past 100 years.

But I am not relying on the testimony of others to convince me this animal is extant, I am backing my own judgement in declaring what I have actually observed.

It appears that I do this at risk of my own reputation, for I am only too aware that once I declare these truths, the sceptic brigade — bless their atheistic little hearts — immediately pounce like ravening wolves, gnashing their teeth, frothing at the mouth and hammering their extinction drums in my face in doing their level best to make me out to be a raving imbecile, a serial hoodwinker, or at worst a sadly disillusioned senile old tiger hunter who should be committed to an asylum. But honestly, such flattery, such adulation, such hero worship, such reverence is like the proverbial water off the duck’s back.

I know what I know, and that apparently is a darned lot more than my sceptics.

I have been searching for the thylacine for the past 46 years. The highlight was when I actually came face-to-face with a Tasmanian tiger in March 1995 in the Weld Valley wilderness of south-west Tasmania.

I well remember back in the 1940s-’50s era being drawn time and time again to the museum’s thylacine display, a particularly imposing and educational diorama of a group of thylacines in a splendid bush setting; I have never forgotten it. Although I didn’t place any great emphasis on the exhibit at the time, it remained firmly fixed in my memory, and it may have somehow provided the nucleus for my later adulation of this unique animal. Visiting the museum several years ago I was invited down to the storage area and inquired as to what had become of the thylacine diorama exhibit, but apparently no one knew where it was, if indeed it still existed.

Back in those days there remained the hope the thylacine had survived, in Tasmanian at least, but as time went by and without conclusive evidence, this hope naturally evaporated as the likelihood of its survival became more and more improbable. By the time I entered the debate in 1967, the writing was well and truly on the wall and that window of hope was fast closing.

I can quite understand the scientific attitude, for nothing short of a freshly dead or living specimen will suffice, and to this point in time, no such evidence has been forthcoming. But that is not to say it won’t happen in the future, for we simply cannot place a definite date on extinction.

The scientific fraternity is bound by a strict protocol that forbids what are considered irrational statements, by and large to protect their backs and reputations. For this reason they refuse to budge on the principle of the thylacine’s extinction regardless of their private opinions and philosophies. Certain academics present themselves as experts on the thylacine when in actual fact there are no true experts when it comes to this animal, only pretenders, for there is so much that we don’t know about it. As I have said before, the true experts were the trappers and bushmen who lived alongside the thylacine in the bush and knew and understood its every mood and peculiarity.

I personally know of only two academics who have left the door slightly ajar concerning the thylacine’s survival to the present day, and they are the late Dr Eric Guiler, and wildlife authority Nick Mooney. These two men as leading lights in the thylacine debate command an astute status in their knowledge of this animal, and thus their opinions are much valued.

By all means, watch the 43 seconds of moving footage of the last thylacine in captivity, watch it over and over, closely, and let it sink in, but don’t be misled into believing that animal was the last of its species — it most definitely was not. That assumption is a myth that has taken root and sadly led many generations astray. In time the truth will be revealed.

* Col Bailey is a thylacine researcher who has spent 46 years looking for the animal. He lives in Tasmania and is the author of two books on the Tassie tiger. This is an edited version of a story that appeared on Tasmanian Times.

Panthers and pumas and (Tassie) tigers, oh my! Why is Aussie media so obsessed with big cat ‘sightings’?

Crikey Worm: plebiscite D-Day, and was that a Tassie tiger?

How to take a circulation tiger by the tail

mmmm. Just a skerrick of evidence would be nice. It doesn’t have to be a whole (living or dead) animal – just some fresh DNA. I’m sure Mike Archer would be ecstatic to verify it.

I’d love to believe they were still around, but the absence of evidence is pretty strong evidence of absence in this case.

If nothing else, it really stretches credibility that they’ve escaped the incredible carnage on the logging roads. Old-growth logging trucks only travel by night to escape being filmed, and night is when all the critters are out and about. Logging companies have employees drive the route at dawn to haul the roadkill out of sight into the bush at the roadside. It beggars belief that a living thylacine population has somehow continually avoided dying on roads that claim every other critter in Tassie with monotonous regularity.

I really wish this was true. But….evidence?

This pera’
“It appears that I do this at risk of my own reputation, for I am only too aware that once I declare these truths, the sceptic brigade — bless their atheistic little hearts — immediately pounce like ravening wolves, gnashing their teeth, frothing at the mouth and hammering their extinction drums in my face in doing their level best to make me out to be a raving imbecile, a serial hoodwinker, or at worst a sadly disillusioned senile old tiger hunter who should be committed to an asylum. But honestly, such flattery, such adulation, such hero worship, such reverence is like the proverbial water off the duck’s back.”
and the fact that having spent your whole life looking for the beast, you finally find one…. and you can’t take a photo?
Makes me think the author a bit suss.

I may have an atheistic heart, soul and brain, too true. However someone I used to know spent a fair amount of time in South West Tasmania. He swore that the thylacine was not extinct. He was not a person given to conspiracy theories. On the other hand, he was unable to offer proof.

Bon chance with your crusade.