Debt, debt, debt. It's not the bogeyman; lifting government borrowings would be good for the economy. Let's have an adult conversation about a topic the voters seem to be terrified of.

Could we possibly put this galling, imitation debt ceiling debate to good use? In this country, as a bond trader tells me, “there is no adult appreciation of what debt markets do”.

Australia has no debt crisis — our government debt is exceeded by our credit card debt, as one commentator pointed out yesterday. Our public debt as a proportion to GDP is among the lowest in the OECD. We have a triple-A credit rating from all three agencies (for what that’s worth).

As NAB chief Cameron Clyne told an Australia Israel Chamber of Commerce lunch a few months ago, Australia does have a debt problem:

“We don’t have enough. We have a lazy balance sheet. We are a AAA economy. We are the most effective borrowers in the market and we are having a very immature debate around debt in the economy at the moment. There is a very legitimate debate to be had about how you use debt.”

The end result is a chronic lack of modern infrastructure: in transport, energy, communications, you name it. No second airport for Sydney. No fast rail. We waste hours and hours in traffic jams. Don’t even mention dirty old coal-fired power stations or ageing copper phone lines.

Treasurer Joe Hockey wants to raise the debt ceiling — introduced by then assistant treasurer Chris Bowen in 2008 — from $300 billion to $500 billion. Labor and the Greens blocked the increase in the Senate yesterday, proposing to cap any increase to $400 billion unless a justification is provided — perhaps by Treasury Secretary Martin Parkinson and Finance Secretary David Tune when they appear before Senate estimates next week. It’s forecast we might hit the $400 billion limit in 2016-17.

Otherwise, Hockey is darkly hinting he may have to shut down the government on December 12, when we’ll hit the $300 billion limit. Hilariously, Prime Minister Tony Abbott is comparing ALP tactics to those of the Tea Party. Save it for the shock-jocks, please.

“Why try to bind future Parliaments by picking a stupid number out of the air?”

We should just abolish the debt ceiling altogether, for the very good reasons outlined by Bank of America Merrill Lynch economist Saul Eslake and covered by journalist David Uren. Eslake’s main point is that the debt ceiling adds nothing to the parliamentary debate about the budget and is redundant in our Westminster system — it is a graft introduced by the Labor Right who, Eslake says, obsess over the “arcana and minutiae of American politics”. Too much time watching West Wing.

Anyway at the end of the day, if the government borrows too much we electors kick them out. Why try to bind future Parliaments by picking a stupid number out of the air?

But if we’re not going to abolish the ceiling, perhaps the Treasurer could take the opportunity to spell out not just what the debt might be used for, but what kind of money he would like to borrow.

The problem is not the one identified by Maurice Newman in this CEDA address on Monday, when he complained “already the yield on Australia’s five-year government bonds is the highest of any triple-A sovereign borrower”.

That difference is driven by our higher official interest rates — which anchor the debt markets. Which is in turn a reflection of our relative economic strength, coming through the GFC as well as we did. 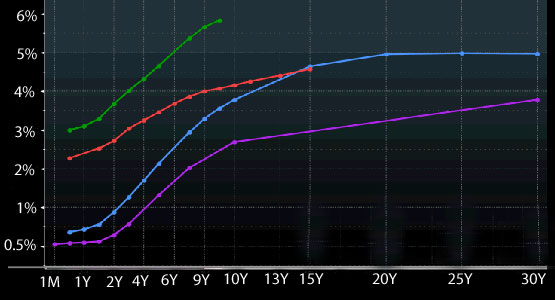 As the graph shows, Australia’s debt markets do compare unfavourably to those of the US, in two key respects: the debt is shorter-term, and the spread between corporate and government-sector debt is wider and gets even wider as the tenor increases.

Australian corporate debt is the green line: it is the most expensive debt (i.e. higher interest is payable), the curve rises most steeply (i.e. the longer-term the loan, the more expensive it gets) and the maximum term is nine years.

Australian government debt is the red line: it is the next-most expensive debt (reflecting our higher official interest rates than the US) and the term extends out to 15 years; much longer than the corporate sector.

Notice that the spread between the green and red lines — which is the relative cost of corporate versus public-sector debt, reflecting the extra risk premium business borrowers must pay — widens as the term of the debt increases. The opposite relationship is evident in the US yield curves, which widen out but then converge again at the right.

US corporate debt is cheaper than Australian corporate debt, it tracks US government debt more closely, and (this is fundamental) it extends out to 30 years for both public and private. That has huge implications: longer-term debt markets open up all sorts of possibilities for funding major infrastructure, including through public-private partnerships.

Let’s use the phoney debt ceiling debate to ask worthwhile questions, like why does our corporate sector have to pay so much more interest? Why can’t both public and private borrowers issue longer-term debt? These are important questions for Australia and with the world’s fourth-largest pool of savings, looking for predictable annuity-style returns, there is no question we can sustain a deep, liquid debt market — it would be a smart alternative to concentrating ever-more money in our top 20 listed companies.

As The Age’s Malcolm Maiden pointed out this morning, it was a strange moment when former treasurer Peter Costello paid off all the Commonwealth debt a decade ago. Apart from anything else, bond markets were screaming. Sure, that’s how they make money. But there’s nothing wrong with that and the point is it shows a deplorable lack of ambition: as a nation, we can’t think of anything worth investing in, for the longer-term?

If debt was so bad, no one would ever buy a house. Maurice Newman’s faux-stern debt reduction mantra is backwards-looking, Thatcherite thinking. The PM’s closest business adviser is yesterday’s man, with yesterday’s answers to yesterday’s problems.

Playing chicken with the global economy: US Congress in a debt ceiling showdown

To escape from debt, the Coalition needs to curb its spending addiction

Thanx for a most interesting piece.

Good piece and a great graph. Most illuminating.

Where was all this context when the likes of Hockey, Robb, Abbott and Cousin Jethro were running around scaring the natives?

Interest rates are low. Governments should be borrowing and investing in some massive infrastructure while we can afford it.

Interesting article, Paddy. My concern is not with the economics of borrowing, but the politics of it. It is dishonest in the extreme on the Coalition’s part to use the scare of ‘debt and deficit’ to win an election, then promptly follow the same path as the Labor government did.
Furthermore, while it may be fine for the Coalition government to borrow unlimited money to fund much needed infrastructure, I believe they have an obligation to tell the taxpayers, who will ultimately pay the bill, just what they intend to spend an extra $200 billion on. Paying off Labor’s ‘debt and deficit’ just doesn’t cut it!
Where is the MSM and the reputable economists/commentators on this matter? Not only did they allow the rAbbott to cruise into government without any scrutiny, it now seems this attitude is going to continue.
Hopefully it will not be too long before this government finds that the voters are not mushrooms: kept in the dark and fed compost!!