Documents obtained by WikiLeaks indicate the Trans-Pacific Partnership free trade deal would put local industry at the mercy of America's copyright and IP laws. Could this hurt Australia's capacity to innovate in business? 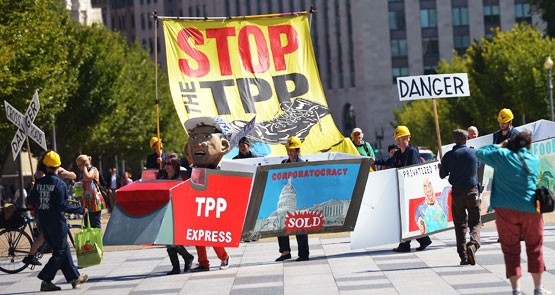 Leaked documents from the negotiations of one of the world’s most secretive free trade agreements show Australian businesses could soon be subject to the worst aspects of the American copyright regime. Intellectual property experts fear the impact this will have on innovation and compliance costs.

The leak, hosted on WikiLeaks, is of the negotiating positions of the major parties at the Trans-Pacific Partnership negotiations. Since 2008, most of the countries around the Pacific Rim, including Australia, America, Japan, Canada and New Zealand, have been negotiating in secret a comprehensive free trade agreement.

Transparency advocates have long argued that the scope and severity of the agreement should be made public. The leak appears to validate a lot of their concerns.

According to the leaked documents, Australian government negotiators have decided not to oppose vastly more stringent and punitive copyright protection measures, as well as a series of extensions to copyright and trademark law.

Dr Matthew Rimmer, one of Australia’s leading intellectual property experts and one of the authors of the recent IT Pricing Inquiry, describes the agreement as “Christmas for large corporations”.

“For small businesses, it means much greater transaction costs of dealing with intellectual property, and it would expand the scope of liability,” he said. “Intellectual property needs to balance the incentives of the incumbents against the opportunities for tomorrow’s innovators … But if you look at the agreement, there doesn’t appear to be much of a struggle.

“I’m extremely concerned about the impact this will have on competition and innovation … countries like New Zealand and Canada are trying to bring balance. But it doesn’t appear that Australia is doing anything to help them.”

Free trade agreements often bring new opportunities and new markets for small businesses. But Rimmer is reluctant to call the TPP such an agreement. “It’s not a pure trade agreement. It’s quite sweeping. And if you look at the intellectual property chapter, it’s a trade protection agreement rather than a free trade one.”

It’s possible that Australian negotiators have given ground on intellectual property in order to secure concessions in other areas. But the secrecy of the whole agreement makes it hard to know if this is the case, Rimmer says.

Rimmer is also concerned about the fact that on many of the clauses, the leaked texts do not conform to what the Australian government has said publicly. “It’s quite alarming from that perspective. It seems to be a juggernaut designed to roll over and crush domestic laws across the Pacific Rim.”

Rimmer says when Australia signed a free trade agreement with the United States it was kept secret until the last minute and then “railroaded through Parliament”.

“There was very little opportunity for proper discussion. And that set a very disturbing precedent.”

There are many aspects of the leaked document worthy of comment, but this one struck me a particularly pernicious:

One section seems to make a failure to self-incriminate by surrendering documents on demand, a criminal offence in itself.

To my eyes, the TPP poses more of a risk to sovereignty that refugees…

I am proud to say that I donated to the Wikileaks reward and pledged a small amount to go toward it for the leaking of this information. I realised it had worked when I got the email asking me to pay up yesterday evening!

You guys on the left are always talking about us moving away from mining, agriculture and the like and becoming a “knowledge” nation. Well guess what, protection of Intellectual property helps with that.
Standardized laws across countries help encourage the export of IP, which Australia, is well placed to take advantage of. Gives companies certainty that no one will steal their IP for free, so they are more likely to share it for paying customers, rather than keep it in their own country. This will apply to US imports of IP, but also to innovative Australian companies that look to export their IP oversea’s.
With the internet lowering international borders and trans country cybercrime on the rise, these agreements will be becoming more and more important to ensure business is protected.