Kevin Rudd, our Mao, or maybe our Obama, bows out

Kevin Rudd was a transformative figure, a politician above politics who just wanted to get things done. And that the Labor Party is in complete disarray, well -- is that really his fault? 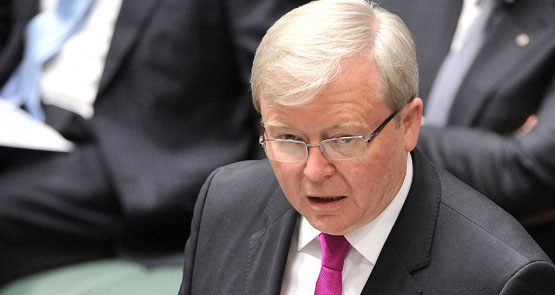 Extension of the field of struggle … there’s a scene early on in Michel Houellebecq’s novel of the same name (it was titled Whatever in the English translation) in which the book’s “hero”, who is soon to be sent out on a regional placement, attends a farewell party for a half-known colleague at his offices. The event starts out half-hearted and descends from there; before it has ended and the speeches given people are leaving or chatting among themselves around the snacks. You know from that scene that you have found the great novel of contemporary life, capturing life’s many tediums, the sense that most events are half-done, missed opportunities, fakes of a real elsewhere.

Thus it was when Kevin Rudd, the member for Griffith, rose on Wednesday night, the second day of the first sitting of the Abbott government, to announce his resignation. Could he have waited a few weeks, six months, to go at a time when it would have looked more procedural? He could not. It had to be now. But of course it was nothing to do with Rudd. The impact on his family of the post-election bloodletting — now over and done — was too much, and “for me, my family is everything. Always has been. Always will be …” . That is untrue of any man of ambition, of course, and it is particularly untrue of Rudd. It is part of this squidgy sentimentalism, this privatisation of experience that people who have worked 100-hour weeks for decades on end feel the need to stand up and say that it’s nothing but family, as though no other forms of solidarity could command our attention.

So it struck a false note from the start, in a speech that was a false moment from the start. The onetime saviour of the party’s electoral chances, consigned to the outer darkness in a sleazy and superfluous coup and then returned to power — you need to step back a bit from what has transpired to remind yourself of how extraordinary the last six years have been on the Left side of politics — left with the people opposite far more willing to eulogise him than his own side. No wonder. Rudd was, after all, the man who defeated John Howard at a time when the Right had believed him to be some sort of unmediated embodiment of the Australian people, and then dispatched Malcolm Turnbull, the only man who could have beaten him. Their memory of him is that of a clean kill, with themselves as prey. Their farewells were a letting-go of traumatic memory.

For Labor, that past is not even past. The deep wounds that were opened during Rudd’s tenure by his working methods, his treatment of colleagues, his limited accommodation of the micro-factions, were then turned into deep gorings by his sacking – an act of self-delegitimisation that no amount of talk about the Westminster system could justify in the eyes of the public.

“Like most technocrats who have risen by democratic means, Rudd dreamed of a time when the politics could be over, and stuff could just get done.”

Doubtless, talk of the mounting chaos created by Rudd’s tendency to start two dozen initiatives while progressing few, and finishing none, has some truth to it. But the perspective from history seems to suggest another, clearer explanation: Rudd went to war against the mining companies outside the party in an effort to claw back some of the country’s wealth flowing into private hands as a free gift — and he was disdainful of the right-wing micro-factions within. Since the latter have a pretty cosy relationship with capital, that was essentially a war on two fronts against the one “axis of weasels”, and it ended as such campaigns usually do. Nothing signified the victory of the factions more thoroughly than that a factionalista of the Left was installed in his place. The politics by now was a brand, the form was all that mattered, preserving the process of factional organisation within the party.

During those two-and-a-half years Rudd was undermined by much: by implementation failure, as with the pink batts campaign, by mendacious campaigns against successful policies — such as the Australian’s skewed and duplicitous war against the Building the Education Revolution process — by his unwillingness to engage in a wider politics. He should have garnered support for the mining tax from the grassroots and made it impossible for the tycoons to turn themselves into populist heroes; he went it alone, and left himself isolated. Like most technocrats who have risen by democratic means, he dreamed of a time when the politics could be over, and stuff could just get done.

Rudd’s language, as I’ve noted before, resembled Mao’s, in its idea of what categorically transformative politics could be. He had the same impatience with party structures and talked about something that no one did in Labor — surprise, surprise — the redistribution of power. Sometimes that was addled, as with the 20/20 Summit, a sort of weird elitist-populist process, by which the Australian people became their own management consultants. Sometimes, as with the National Broadband Network, it hinted towards a yet more radical future, the beginnings of a process whereby capitalism might be situated within a large process of action. Call that socialism if you like, though the word summons up the wrong image, of grinding dirigisme. But a world coming, the world coming, where local communities and groups can achieve an autonomy within a wider network, bypassing the cash nexus, is hinted at in the NBN.

Rudd, like his fellow technocrat Obama, had big dreams. But Obama had the wisdom to realise that only one big thing — healthcare — could get done against massed forces, and he did it. For Rudd it was not only the NBN that suffered from lost connections. By the time he came to stand up and retire, the one thing everyone could talk about was the “apology” — a symbolic act of importance to many (not all) indigenous people, long on the books and simply awaiting the departure of its greatest opponent. Abbott remarked that Howard should have taken the opportunity to make the apology. But it would only have been a striking political act had it come from Howard. For a Labor PM, there was nothing else that could be done.

Quite possibly, the single best thing done under Rudd/treasurer Wayne Swan was the raising of the pension — a simple lessening of human suffering for the hundreds of thousands making do on our parsimonious allowance to the pre-super generation. That his successor — under the sway of “brutopian” neoliberal economists such as Craig Emerson — abolished the single parent’s allowance, leaving single mothers $73 a week worse off while talking about misogyny, suggests that there was a real political difference between the Rudd and Gillard eras.Nevertheless, Gillard will have a lot more to look back on than Rudd in terms of what was bolted down. DisabiltyCare, the Gonski education reforms and Fair Work were things the Coalition had to agree to as the price of election, and their undoubted and imminent attacks on the remnant social democratic framework will have to be conducted on that terrain. But was such a political achievement a measure of political judiciousness, such as Rudd always lacked, or simply an unwillingness to engage in the audacity he displayed at least in some measure?

The utter paradox is that the one area in which Rudd showed a judiciousness, in realpolitik terms — abandoning the emissions trading scheme — is the one moment when Gillard’s policy initiative was disastrous politics. And it was Gillard’s failure to be disloyal — to the micro-factions — that helped doom the party. She should have turned on those who helped her to power, implemented recommendations made in the Bob Carr, John Faulkner and Steve Bracks Review and started the party onto a renewed basis, such as it could have marshalled in 2013.

Whatever the degree to which Rudd’s subsequent Maoist-style campaign from the mountains of the backbenches damaged Labor remains to be seen. By 2012, stories about internal disputes appeared to be written without any sources whatsoever, and were pretty much fact-free. Did Rudd add a new and toxic level to a party toxified by the micro-factional “leaders”, who have spent two decades turning the party into a political Balkans? Doubtless to a degree, but there is a sense in which he is being used as a scapegoat to bear these troubles away. He will leave, and the plotting will begin anew — with one micro-factional leader installed who sounds exhausted by the efforts he made to get there, and what he had to become in order to do it. The last six years have been exhausting to watch. God knows what they were like to live.

And, in the end, they all died. The sense of waste that attends this departure, of dissatisfaction, of solidarity not felt and love revoked, tells you that this was no farce, with its explosive release of energy. But nor is it tragedy. It is, well, whatever, a sense of something happening elsewhere, that this is not how things are supposed to play out. Labor, win or lose, has always managed to summon some idea that something great was at stake. Even when someone as dynastic as Kim Beazley left the green benches, there was a sense that something had been represented, some tendency within ourselves to be better, such as even the cynics on the Right would recognise as their necessary other.

Given the extension of the field of struggle — when News Corp and the Coalition have essentially fused together as a single political machine — it is a spirit Labor will need to find, to create a political offering that can break through the wall-to-wall propaganda. What we saw on Wednesday, in the feting of Rudd from his erstwhile opponents, was not generosity, but a kind of pity, even catharsis. His achievements have been real, and more than credited. They will be in a brick-size memoir. But they will need to be in order to distinguish them from the cloud of failed initiatives, of half-arsedness, from Labor politics now, the great whatever.

What we saw on Wednesday, in the feting of Rudd from his erstwhile opponents, was not generosity, but a kind of pity, even catharsis.

Particularly so with Turnbull’s we-always-bury-saints effort. It was cringe-worthy.

Where are the politicians with a bit of ‘edge’?

I guess we’ll have to rely on the almost inevitable screw-ups of the ‘suppository of all knowledge’* for entertainment.

* A more-than worthy counter to ‘Electricity Bill’ but do they use it?

By 2012, stories about internal disputes appeared to be written without any sources whatsoever

Journalism in the modern era, in a nut.

In too much modern msm – op-ed opinion trumps content.

Oh yes.
The great whatever indeed.

Thanks Guy, as usual.

Do all technocrats have tunnel vision?