We've heard a very heavy-hitter was knocked back for a redundancy from Fairfax. Plus other media snippets.

Fairfax farewells biz scribes — but not Pam Williams.  The Australian Financial Review will lose some of its most experienced and respected reporters following Fairfax’s decision to merge the AFR and BusinessDay reporting teams. But not all those who applied for a voluntary redundancy — including some big-name writers — were allowed to depart Fairfax with a payout.

The AFR‘s Sydney newsroom is abuzz with talk that the paper’s editor-at-large, Pamela Williams, was knocked back for a redundancy following an intervention by Fairfax CEO Greg Hywood. Williams declined to comment, but multiple sources say her redundancy application was approved before being overturned. Unsurprisingly, Fin journos are speculating whether the backflip was a form of “payback” over Williams’ book Killing Fairfax which chronicled the collapse of Fairfax’s classified advertising revenue streams in stunning detail. The high-selling book is one of three contenders for Walkley book of the year. While some in Fairfax speculate financial factors may have been at play given Williams’ longevity at the Fin, others say her payout would have been lower than that given to other journalists in recent redundancy rounds. Fairfax journalists who take redundancy receive four weeks’ pay for every continuous year of service.

A Fairfax spokesperson declined to comment this morning, saying the company would not discuss individual employees’ employment arrangements. Crikey understands other Fin journalists who applied were also knocked back for a voluntary redundancy.

Veteran deputy editor Judith Hoare is among those leaving the paper, as is highly-regarded AFR Magazine editor Jeni Porter. Senior journalist Andrew Cornell, industrial relations editor Mark Skulley, markets editor Peter Wells and companies editor Nabila Ahmed are leaving too. A Fin insider described Hoare as “the biggest loss in a generation of editors and journalists from the AFR. She is one of the best editors in the country.” Ahmed is also seen as a big loss because of her news-breaking abilities and role spearheading the AFR Sunday program on Channel Nine. BRW senior writer Leo D’Angelo Fisher is also taking redundancy. Fairfax announced last month it was seeking 30 redundancies from its business media unit as well as 20 from its news media and life media divisions. — Matthew Knott

Schwartz launches Saturday paper. The Monthly and Quarterly Essay publisher Morry Schwartz has unveiled plans for a new weekend newspaper, The Saturday Paper, to launch early next year. As Crikey revealed last week, the paper will be an upmarket mix of features, investigations and analysis and will be edited by former Sydney Morning Herald journalist Erik Jensen. Although many publishers are moving away from print, Schwartz believes there is a gap in the market for a new high-quality title.

Jensen told Crikey this morning the paper was aiming for paid sales of 80,000 to 100,000 within the first year. “We need a paper that gives journalists the time and resources and space to tell complex stories in a deep way,” Jensen said. “We believe we have found a model to fund good journalism and repair the damage that the internet and a panic about profitability has done to journalism over the past decade. We absolutely expect to make a profit. Even on our most conservative figures, we will be profitable within two years.”

Jensen says the paper, which will be available on newsstands in Sydney, Melbourne and Canberra, has already got a big stable of staff writers and contributors signed up. He would not comment on how many full-time staff the paper will hire.

“We have spent 18 months distilling what newspapers are doing right and wrong and what they should be doing,” he said. “This paper is about long-form journalism; there are no short stories in this newspaper. We’re slamming the brakes on a news cycle that is no longer helpful to journalism.”

Morry Schwartz said in a statement:

“This is something I have wanted to do since I first got into publishing 40 years ago. Now is the perfect time. I believe in quality journalism. I believe in print. While some in the industry have convinced themselves of terminal decline, I believe an audience exists for a new player to come in and do journalism better than anyone else. I am launching this newspaper because I know it will work.” — Matthew Knott

Front page of the day. The Toronto Sun continues to have a field day with Toronto’s crack-smoking mayor, Rob Ford. 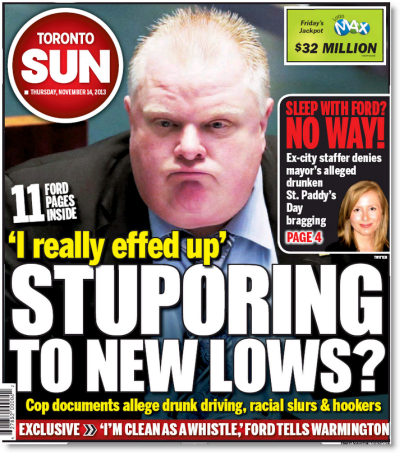 Is the Ford Theatre going to do “Animal Farm”?
“Snowball” picks himself?