A trip to the DMZ (and a T-shirt to prove it): Korea divided on a solution

Opinions in South Korea are sharply divided on what to do about its nuclear neighbour. Crikey visited the no-man's-land between still-warring nations to examine whether diplomacy is still an option. 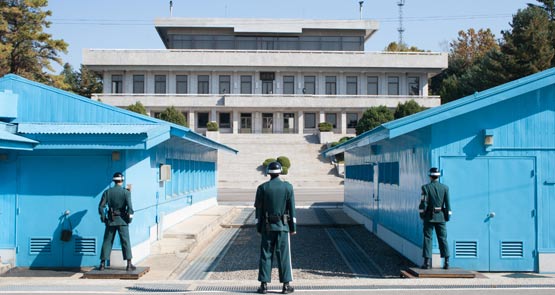 “WELCOME TO THE JSA!” It’s the exclamation mark combined with the scrolling LED sign that encapsulate the deadly farce. Some 160,000 tourists annually visit the Joint Security Area, the gateway between North and South Korea that almost never opens, one of the most dangerous places on earth and conversely among the safest.

Similarly, the South Koreans Crikey met on a recent study tour. This is a nation still at war, alert if not alarmed. Everyone wants to talk about the “reunification issue” — and opinions are sharply divided on a solution — but it’s front of mind like traffic for Sydneysiders and coffee for Melburnians: conversation without urgency.

The bus winds through the landmine-filled countryside of the 4-kilometre-wide Demilitarised Zone, across booby-trapped bridges, from the JSA to the border. In the hills of the North we’re pointed to Kijong-dong, a sound-stage of a town built for show with barely any residents that the military tour guide only refers to as “Propaganda Village”. But the matching town on the South, Daeseong-dong, is as much of a sham: it’s a tax haven for farmers who are allowed to dodge compulsory military service as an incentive to keep them there.

What you quickly learn is there’s plenty of propaganda on both sides.

At least the South isn’t executing its own citizens. A local newspaper reported this week that 80 people had been executed by the Kim Jong-un regime — for watching foreign films. At the border, we’re warned against sudden movement and venturing too far from the guards (handsome men with clenched fists in dark sunnies, apparently chosen for their looks). The logistics are risible — the main negotiation hut straddling the invisible border is locked on the North side and filled with South Korean guards for our visit; it’s reversed when tourists visit from the North — but nobody is laughing.

North Korea is changing — but not fast enough for its neighbour. Kim Jong-un has banished the seven generals who carried his father’s coffin, and a regime that for decades put the military first is now interested in economic development. Tourism has opened up, and more industrial parks are popping up on satellite images.

“[Kim Jong-un] spent two-and-a-half years in Switzerland as a boy in boarding school,” Young Hie Kim, the editor-at-large and diplomatic correspondent for South Korean national daily JoongAng Ilbo, explained to Crikey. “There, unlike many North Koreans, he has come to realise what democracy is, what a democratic way of life is, and how well-to-do the outside world is, even South Korea. So in his mind, even when his father was still alive, I think he thought that the economy is our way. So as soon as he had a chance he is shifting from military-first to economy-first.

“But he has no money.” And that’s the key. If the regime wants foreign investment it will have to agree to resume talks. And under centre-Right President Park Geun-hye, the South Korea line is firm: there’s no negotiation while nuclear programs remain in place.

The fear of many in South Korea is that the United States is losing interest. Young Hie Kim believes while secretary of state Hillary Clinton was focused on south-east Asia, her replacement, John Kerry, is more interested in the Middle East, while President Barack Obama is distracted by domestic issues. The much-heralded “Asia pivot” has made another deviation, according to Young Hie Kim. 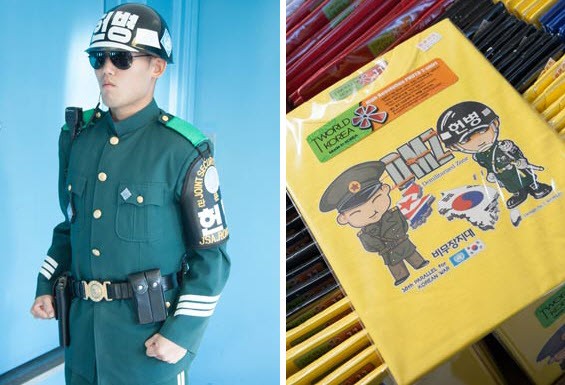 There’s a sense of abandonment in a nation that has historically suffered when the world turned its back. Hahm Chaibong, president of the Asian Institute of Policy Studies, notes insecurity across the region. China and Japan are in an ongoing dispute over the East China Sea — “not a very comforting scene for us” — while the US is “preoccupied”. Japan has its hands full trying to rebuild its economy; China is “rather nonchalant” about North Korea’s nuclear ambitions. “For us, we seem to find ourselves in a very similar situation again,” Hahm Chaibong told Crikey from the institute’s palatial study centre in the middle of Seoul.

There are still more than 28,000 American troops stationed on the Korean peninsula. But the symbolism of a transfer of control in the DMZ from the United Nations (a force always led by an American general) back to South Korea in 2015 has many nervous. It’s already been delayed from 2012, and the South Korean government has pleaded for even more time. A taskforce will report next year on how ready the South is to take control.

Hahm Chaibong said: “Why are we battling with a system that has stood us in such good stead for such a long time? Are we not sending the wrong signal again? Any sense of weakening of US commitment to the region, to the Korean peninsula — why are we tinkering with this command structure?

“Secretary Kerry is not interested in Asia, doesn’t know about Asia … What we see now is this rapid diminution of American interest in the region. It’s part of the leadership there.”

So if the North is off the leash and the South is on its own, what should the Park government do? Hahm Chaibong’s view is chilling: South Korea should nuke up, too. Nobody serious in government will talk about it, but hardliners like Hahm Chaibong are lobbying. “I think we should start seriously talking about it so people know we’re serious about it,” he said.

He cites an unsourced figure of 70% support among Koreans to nuclearise its munitions; others Crikey spoke to didn’t believe it was nearly that high. A government official who asked not to be named rejects the notion out of hand and insists diplomatic options aren’t exhausted. The official was more confident that the attitude of the Chinese is changing. “Momentum is growing,” the official said.

“It’s a taboo subject as far as the government is concerned, but they’re fully aware this debate is taking place,” Hahm Chaibong said of the nuclear option. “But it’s only to show the extent to which we’re going to go to change the status quo, which is the world leaving North Korea to develop its nuclear weapons.” That, Crikey points out, is a scary thought. “I’m trying to scare you,” he snapped back. “I’m seriously trying to scare people, especially the Chinese.”

We’re all suitably scared. Except, perhaps, back at the JSA gift shop, where elevator music provides a surreal sense of calm. Among the tacky trinkets on offer — stick pins, military action figures, wire from the border fence — is a mug that says “FREEDOM IS NOT FREE”.

Fascinating, and a little scary Jason.
What’re the chances of them letting you into the north next time?

@paddy – minimal. During my visit to S. Korea and also my visit to the DMZ, there was discussion of visiting N. Korea. Until only a few months prior (this was late 2012) there had been limited travel between the two – S. Koreans and some foreigners were permitted to travel (under supervision of course) within N. Korea and N. Koreans were permitted to enter S. Korea for manufacturing work.

The way we were told, it was ended when a young woman visiting N. Korea got disoriented while walking on her own and approached the N. Korean border too closely. She was challenged, she panicked and ran, and was subsequently shot and killed. It was explained to us that to prevent a repeat of such a tragedy, the S. Korean government was no longer going to be accommodating people wishing to travel into N. Korea.

Which is a shame – what (limited) views you can get from the edge of the DMZ make it seem a very picturesque country.

I thought it was very easy to enter Pyongyang, in fact the North is trying to encourage tourism. There are a few tourist companies that operate this service. You pay the cash and they will sort the rest out for you. A friend of mine went this year. Had a very surreal experience! I was up on the boarder myself a few years ago, and the stark contrast between the North and South is quite surprising. I found the North to be baron, while the south was green and lush and obviously more advanced. Apparently the Kempinski hotel will be opening up in Pyongyang next year! So it could be an enjoyable experience be led around by your minders and then coming back to a bit of western civilization, while the majority of North Koreans are eating twigs and mud just to fill their stomachs. Maybe they will open up a theme park in the gulags soon too?

I have visited from the North in September 2013. It’s no big deal for a “civilian” you just pay your tour fees (and if you want to go I can highly recommend Koryo Tours – an English owned, Beijing based outfit who has been offering tours for years and produced three excellent documentaries about the country – “A State of Mind”, “The Game of their Lives” and “Crossing the Lines’) though they do restrict access to journalists.

The experience is a little surreal (especially seeing the green highway sign which says in Korean “Seoul – 60km”) but not at all threatening. You go through the room where the “armistice” was signed, there is the axe that was used to kill some US soldiers after an incursion in to the DPRK involving the cutting of tree. Hannah, our English guide said they have toned the anti-american rhetoric down in recent times as they actually used to point the axe out on the tour. Now they just tell the story of how the Americans were so embarrassed by their surrender they left the UN flag behind.

Once you get to the line, you can take photos with the officers, wave at the border guards (who are just trotted out when visitors arrive). When I visited, a group of veterans were approaching from the south of line so we couldn’t enter the negotiation rooms but we did wave and holler at them from our side. They were stoney faced and no photos were taken.

An American Judge, himself a Korean war veteran, on his third or fourth visit to the DPRK said that security is treated much more seriously on the ROK side where visitors are told not to take photos or attempt to engage with northerners.

The whole thing struck me as theatre and managed as an important tourist attraction for the north (there were several coaches of Chinese tourists who arrived after we did). Our trip didn’t visit Kijong-dong but stayed overnight in Kaesong (the ancient capital) – this was a living town and certainly poverty was rising to the surface in comparison to what we saw in Pyongyang.

I stand corrected then – like I said, I was there in late 2012. It’s good to see that N. Korea has opened up a bit since then.