With Rudd gone, what now for Griffith?

Kevin Rudd’s announcement that he will resign from Parliament at the end of the week provides the occasion for a) renewed debate about his political legacy, which I will leave to others to pursue (in some cases for the rest of your lives), and b) the breaking of the longest federal byelection drought since 1951. […]

Kevin Rudd’s announcement that he will resign from Parliament at the end of the week provides the occasion for a) renewed debate about his political legacy, which I will leave to others to pursue (in some cases for the rest of your lives), and b) the breaking of the longest federal byelection drought since 1951. The looming contest for Rudd’s inner-southern Brisbane seat of Griffith will be the first byelection in over four years, and almost certainly the first contested by both major parties in nearly six.

Labor will be fighting to defend a margin of just 3.0%, following a 5.5% swing to the Liberal National Party on September 7. Antony Green calculates that the earliest possible date for the byelection is December 21, but with a date that close to Christmas out of the question and school holidays generally being off limits, it is unlikely to be held any earlier than February.

The Australian reports that three names are being mentioned as potential Labor candidates: Di Farmer, who held the locally corresponding state seat of Bulimba until she joined Labor’s massive casualty list at the election of March last year; Terri Butler, a lawyer with Maurice Blackburn; and Shayne Sutton, a former Rudd staffer who serves Morningside ward on Brisbane City Council, on which she once led the Labor opposition. The Australian speaks of “growing support among the branches for Ms Farmer”, but Fairfax reports something similar of Butler, whose alignment with the Left would appear to stand her in particularly good stead in the Green-Left area around South Brisbane and West End.

As for the Liberal National Party, it is generally expected that their candidate at the recent election, Bill Glasson, will again take the field. Glasson is an ophthalmologist and former Australian Medical Association president whose father, Bill Glasson Sr, was a state National Party MP and minister in the Bjelke-Petersen, Ahern and Cooper governments. Bernard Keane is among those who like his chances, presumably on the basis that Labor will be hit hard by the loss of Rudd’s personal vote. 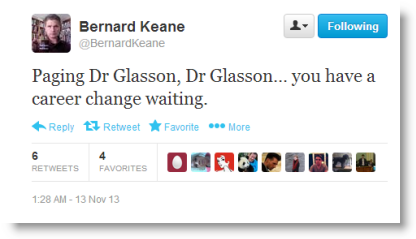 This point is well illustrated by charts below, which track the two-party vote in the electorate going back to 1984. The bottom chart shows the difference between Griffith and Queensland state results with adjustments made to cancel out the effects of redistributions. This suggests either that some manner of demographic shift happened to coincide with Rudd’s tenure as member commencing in 1998, or that he personally was responsible for a solid improvement in Labor’s vote — although the effect wore off somewhat at the most recent election. 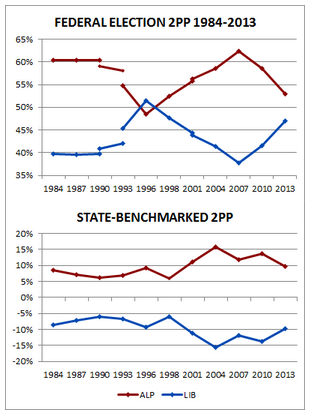 Nonetheless, swings to governments at federal byelections are exceedingly rare, even for newly elected governments in the apparent bloom of their honeymoon.

Rudd established a formidable electoral record in Griffith, picking up 3.3% and 2.4% swings against the trend of the 2001 and 2004 elections. The electorate was substantially reshaped by redistribution at the 2004 election, absorbing inner city areas at East Brisbane, South Brisbane and Dutton Park while its eastern parts were hived off to the new seat of Bonner. In what may have been an early portent of Rudd’s electoral impact, the booths that  were transferred out of the electorate contributed to a surprise defeat for Labor in Bonner by swinging heavily to the Liberals in his absence. Rudd enjoyed a further 3.8% swing as his party’s candidate for the prime ministership in 2007, and as its recently spurned ex-leader in 2010 he suffered what by Queensland standards was a relatively mild swing of 3.9%.