Cory Bernardi, author. You may have noticed firebrand Liberal Senator Cory Bernardi has been a bit quiet on his blog of late. That’s because he’s writing two books, as his office told us:

“The first book is called The Conservative Revolution and will be published by Connor Court. It should be released this month. The second is Outside the Beltway, the fourth compilation of the Senator’s weekly comments. No release date is available at this stage.”

There’s at least one guaranteed buyer for both — literary fan George Brandis, who keeps a large parliamentary bookshelf well stocked, courtesy of the taxpayer.

Newman’s pals. Goodness, the Queensland Premier’s distaste for bikies (and draconian crackdown on their associations) isn’t stopping him from a matey hug. This is doing the rounds on Facebook … would Campbell Newman look a little more intimidating if he donned a leather jacket and some sunnies, and got some ink done? If you’re a Photoshop whiz and would like to show us what Newman would look like as a bikie, email us your best efforts. 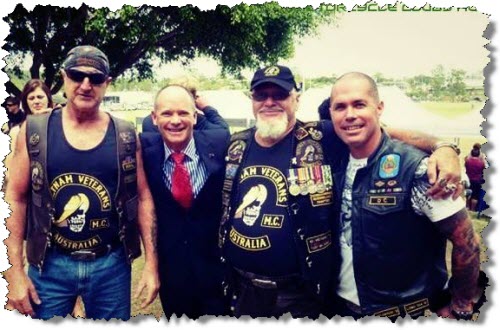 Asbestos problem. Is a company “involved in a major development in Adelaide covering up asbestos”? If you’ve got evidence, send us an email.

Those ghettoes of Sydney. Previously bustling patches of Sydney are becoming ghost towns. As least that’s what this NSW resident reckons:

“Queen Street Woollahra is emerging as the new Oxford Street with an increasing number of empty shops and departures by high-profile tenants. First Bill Grainger closed his cafe because the landlord put the rent up. Now the Buzybee Bakery, an institution in Queen Street, is closing today because the landlord wanted to put the rent up. The shop is packed with people having a last coffee. There are three or four other shops in Queens Street still empty after the tenants moved. Nearby Oxford Street has around 60 empty shops, some of that caused by the sluggish retailing environment, others by the huge Lowy palace at Westfield Bondi Junction, but most (from anecdotal stories) because greedy landlords wouldn’t lower their rents to help their tenants adjust to the weaker times, or put rents up despite the weaker environment. There are a lot of greedy, rapacious landlords in Sydney’s eastern suburbs.”

Take that, Maurice Newman. The Abbott government’s business adviser Maurice Newman — not short of a bob himself — raised eyebrows earlier this week when he declared Australia’s minimum wage is too high. Newman praised the US minimum wage (which is much lower at US$7.25 per hour — that’s why they have so many working poor just across the Pacific). Sounds like the US president isn’t on board with Maurice though:

Click here to read the story Obama is linking to.

They seek him here, they seek him there. Crikey readers are keeping Ms Tips enthralled with their sightings of enigmatic former NSW Labor minister Ian Macdonald, who had that spot of bother with ICAC. We recently brought you this sighting: “I think I spotted disgraced former NSW Minister Ian Macdonald walking hand in hand with an attractive woman along the Yarra River in Melbourne. Has he moved south to escape his NSW notoriety?” We have since received this fresh sighting:

“Saw the man, natty in a grey suit and colourful tie, walking up Sydney’s Bridge Street carrying two plastic shopping bags, each with two four packs of bottled imported beer. He seemed in good spirits, stopping to share a joke with a passerby.”

He does get around. Walking with a beautiful woman by the river one day, carrying imported beer gaily up the street the next. Just one question; is he in heaven or in hell? If you spot the man, do email Tips here.

Cory Bernardi the author……….I am sure Don Randall will buy a few hundred at the tax payers expense based on his past performance

Actually its a good fund raiser …Knock out a book.get all the fellow MP in your party to buys hundreds of copies on their allowance and “give” them away to constituents so it is also a propagande mechanism.Brilliant!!

‘Outside the Beltway’? CB seems to be aiming his next book at the American market. Like they’ll care …

Like so many others Crikey has mistaken bikies for bikers.

Bikers are blokes who like to ride motorcycles. Bikers include Vietnam Veterans and other old farts,like me, who just like messing around with bikes.